On the Trail of the Crocodile Man in Papua New Guinea 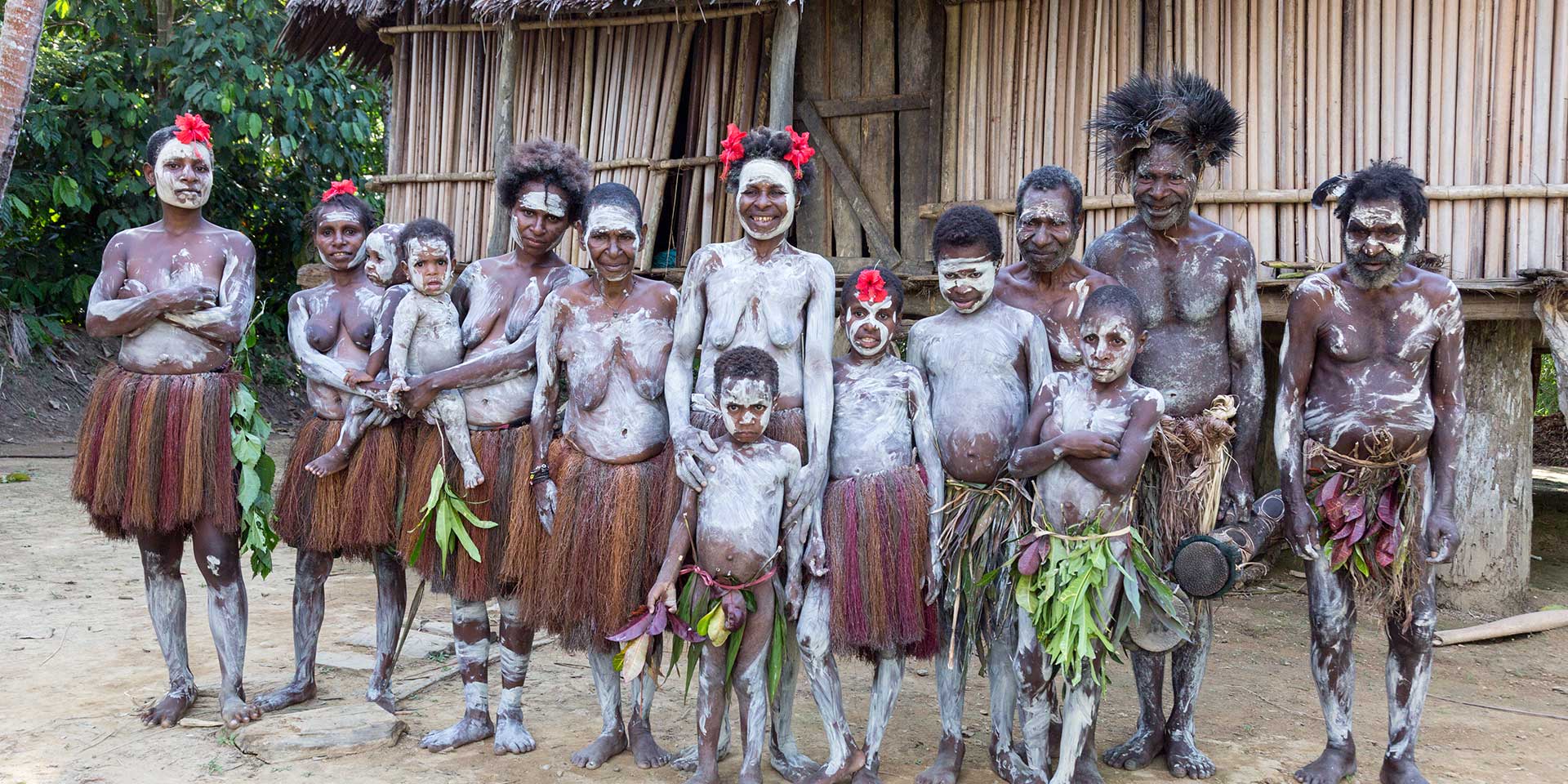 We departed Mount Hagen in the southern highlands aboard a nine-seater turbo prop plane. According to my Aussie pilot, this New Zealand-made PAC P-750 was perfect for the challenges of flying in Papua New Guinea, and the 45-minute flight took us smoothly to the lowlands of the Sepik province and the Karawari river. Our landing strip was a mere patch of grass in a dense jungle area; as we touched down, a group of kids ran up to the plane and we took some photos with them while the aircraft was being unloaded. We felt the contrast to the cooler highland climate as the humidity hit us immediately. 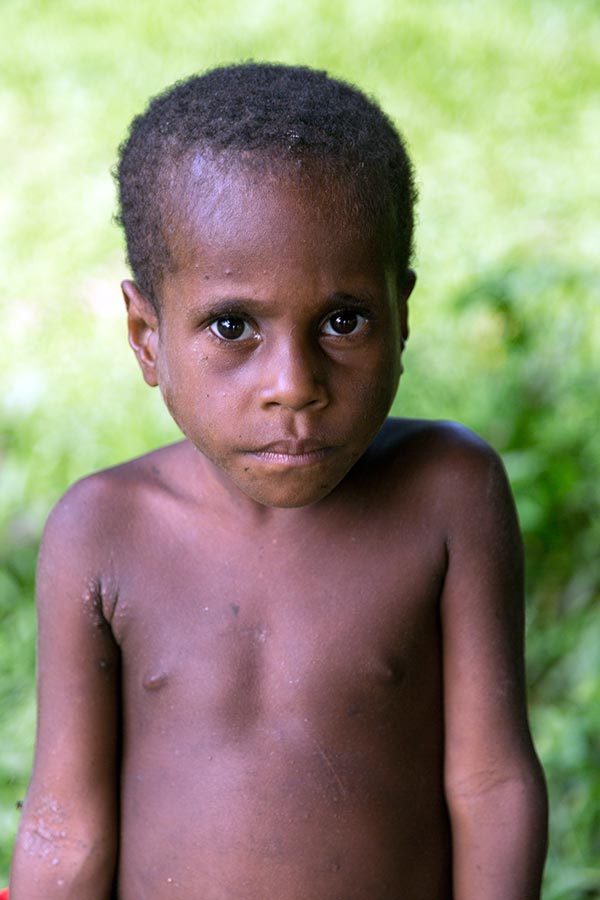 From the airstrip we boarded a boat and set sail for a leisurely 30-minutes cruise down the Karawari river. Once docked, we checked into the Karawari Lodge, a simple but nice property sitting up on a ridge overlooking the river and the dense jungle forest that spreads as far as the eye can see. Here, we refreshed ourselves with lunch before setting off for an afternoon of exploration. 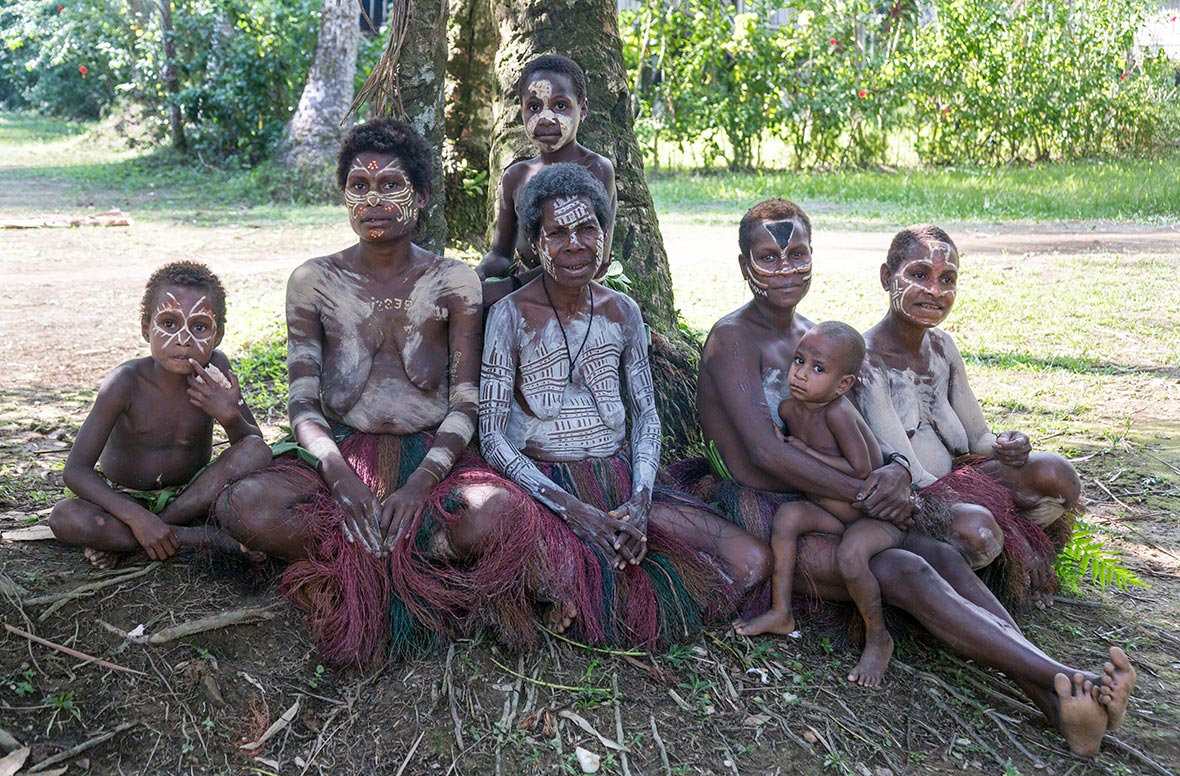 There are no roads in this area – the only way in or out is via the river – so you travel everywhere by boat. Our first stop was Kundiman Village where we met the Yokoim tribe and watched as the women (topless, as were most in this area) demonstrated how they use the sago palm tree to make the main staple foods for the villagers. It didn’t sound very interesting, but in practice it was fascinating to watch how it was done. First, a man peeled the bark from the tree trunk to extract the pulp and one of the women poured water through the pulp to extract the flour, which is pounded and then dried. Meanwhile, several women were busy cooking sago pancakes and a thicker, porridge-like concoction. We gave it a try and, to be honest, the sago tasted pretty bland at best. More colorful was the company, and as the villagers gathered around, we spent an enjoyable afternoon talking to them and taking photos. I quickly learned that the women of Karawari are crazy about smoking cigarettes; though they usually favor ones rolled in newspaper, they were nevertheless very happy to receive some Marlboros as a gift. 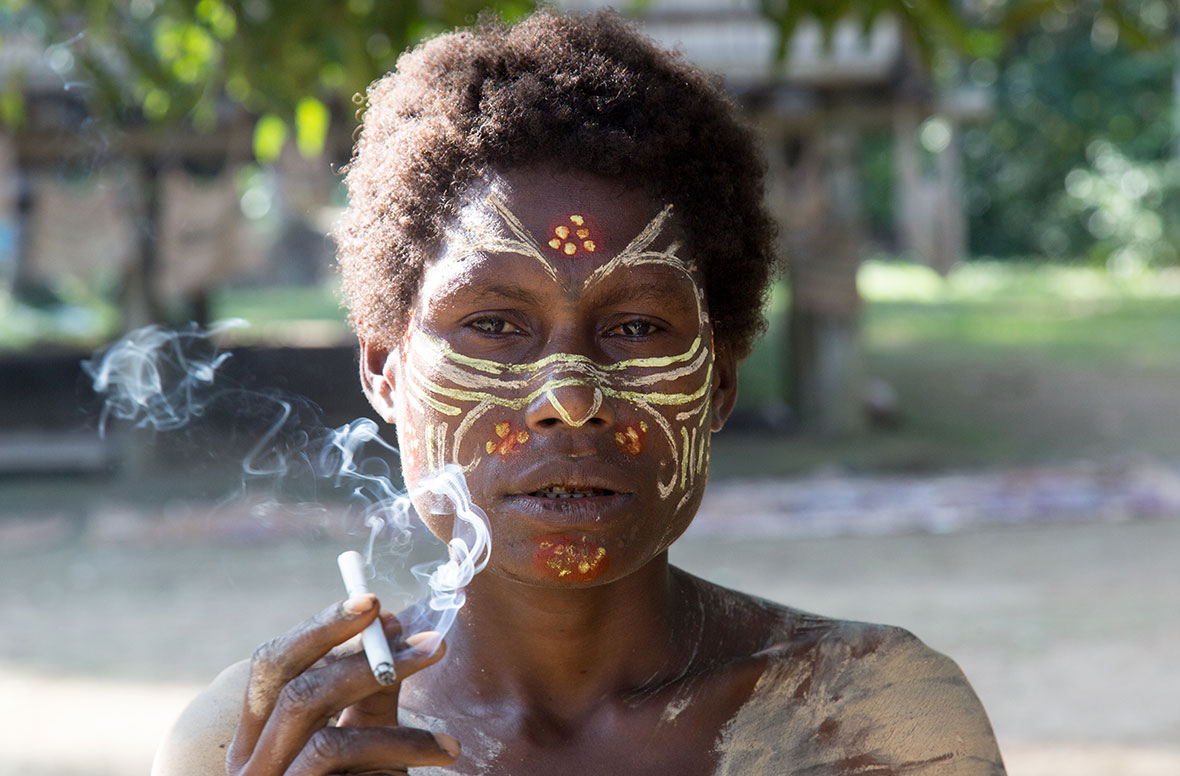 While visiting the local tribal communities, we had an additional mission on our agenda: we hoped to catch a glimpse of a man seen locally in these parts who is among the so-called “crocodile men”. Young boys of the Chambri Tribe in the Sepik River region undergo an excruciating rite of passage in which incisions are made into their skin in patterns that resemble crocodile scales. Clay and tree oil is rubbed on the cuts so they heal with a raised shape and it is believed that the scars prove the boys’ strength.

As the evening drew in with no sign of a crocodile man, we got back in the boat and headed back to the Karawari Lodge to watch the sunset over the river valley and then turn in early for the evening. Even if we’d had any energy left, we had little choice since there is nowhere to go at night and the electricity is turned off before 10 p.m. 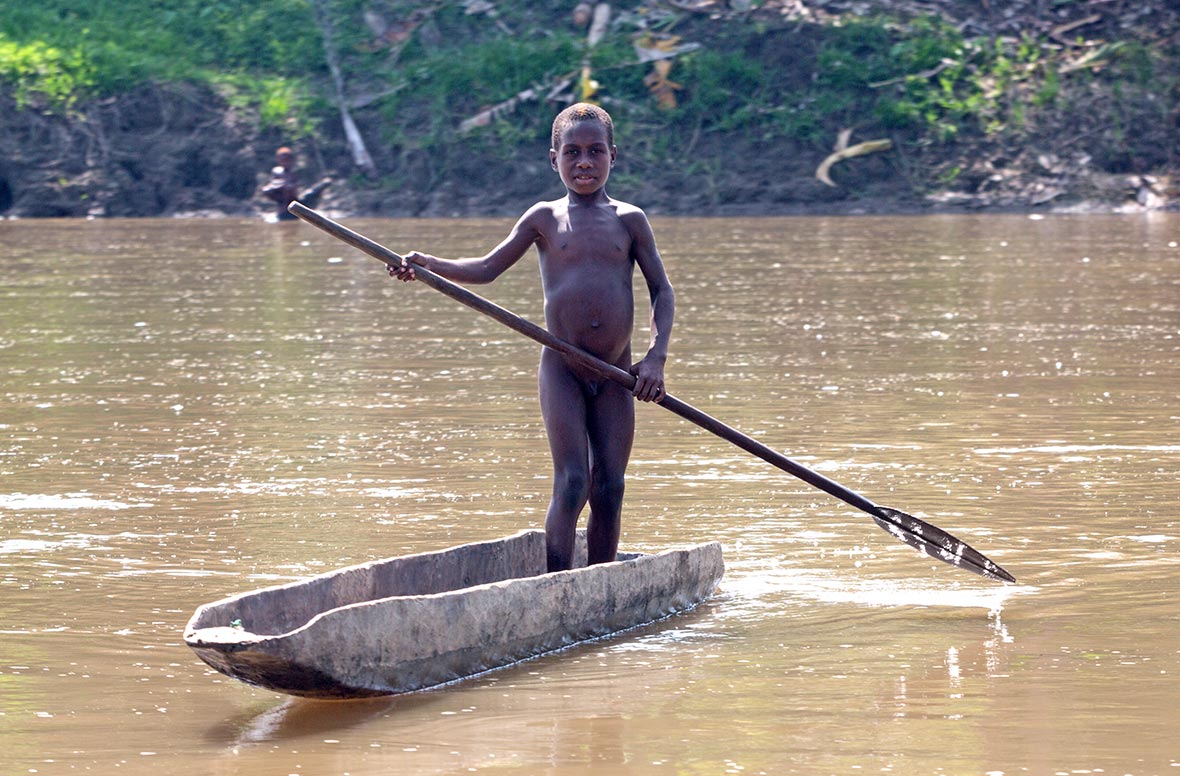 The following morning, after breakfast at the Lodge, we boarded our boat once again and headed out for a full day on the river. As we sailed along at a leisurely pace, watching the peaceful river life unfold around as locals fished from their canoes or from the riverbank, I was reminded of the Kinabatangan River in Borneo, but with the marked absence of monkeys. 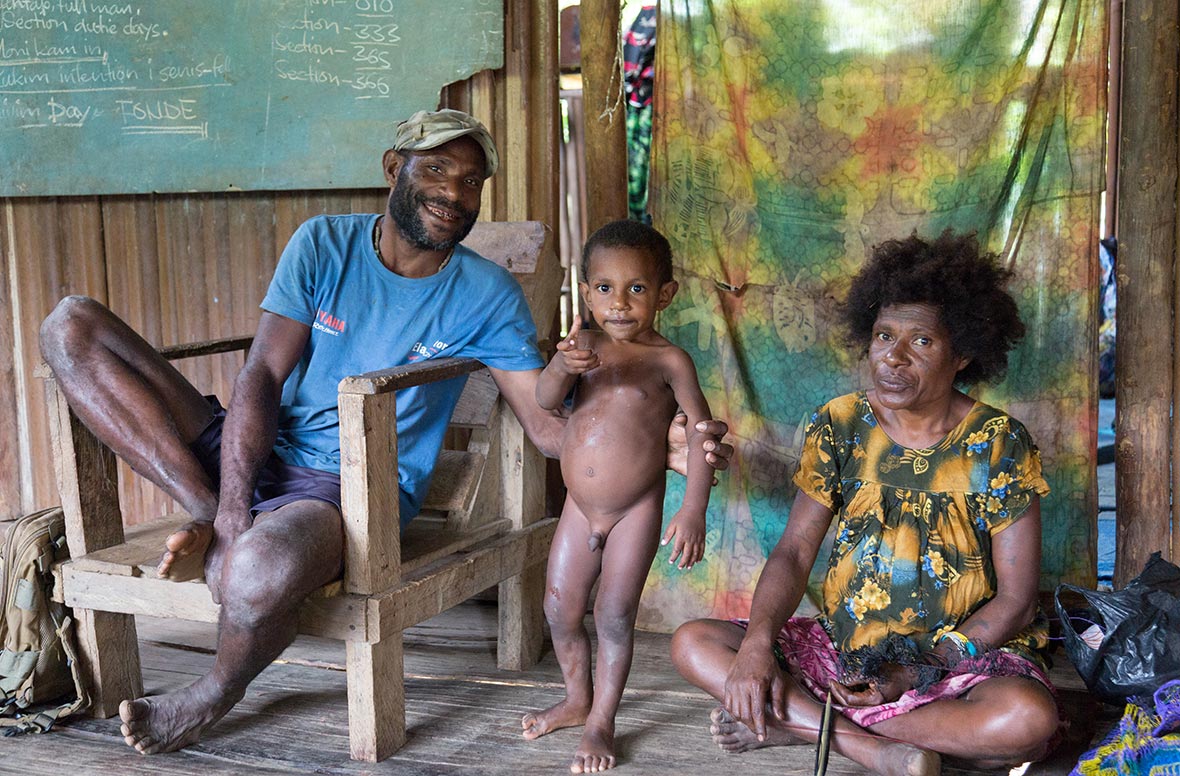 Our first stop was at the village of Yimas, the first of two of the same name, where we met some of the friendly villagers of the Karim Tribe – the women among them, true to form, smoking away. We were invited into one of the larger homes and spent some time chatting with the family who lived there. As it turned out, the man of the house was quite a famous singer in PNG and had enjoyed brief fame with a hit album before giving it all up. He said he didn’t sing anymore, but I managed to coax him into singing a song for us, accompanying himself on the acoustic guitar. 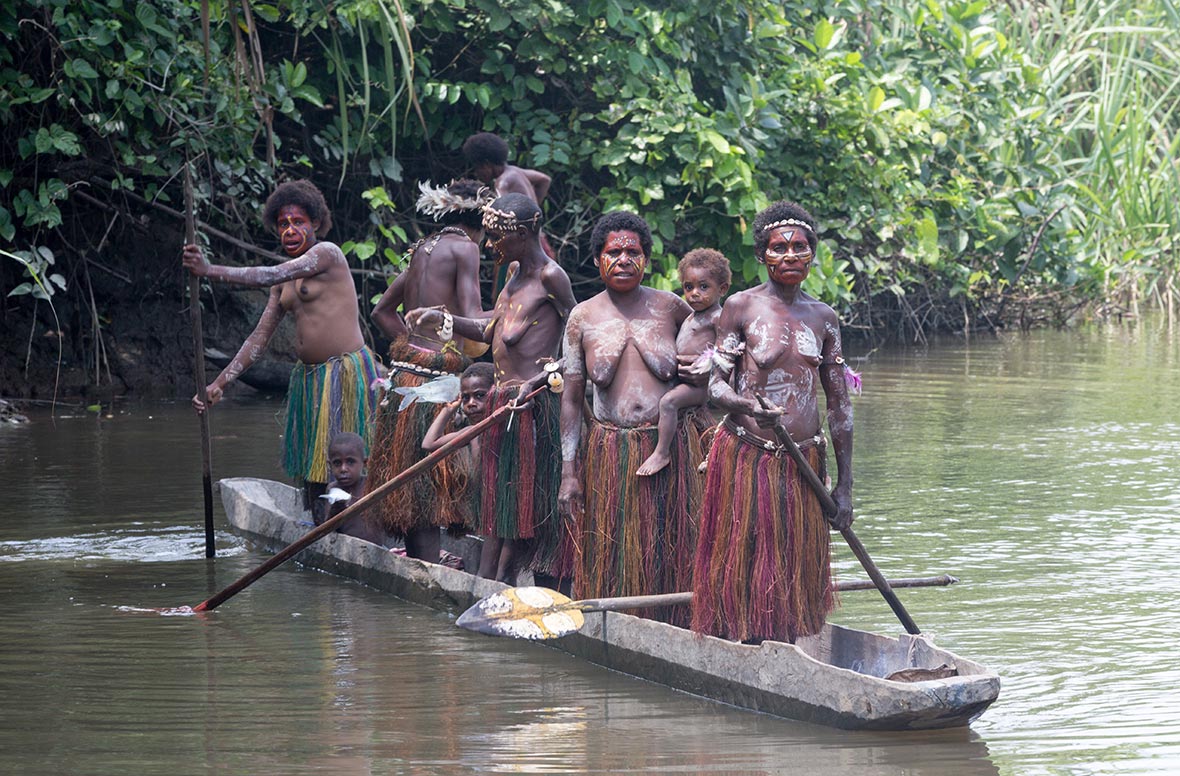 Back on the boat, we sailed past the second Yimas Village where we were met by a boat full of women who were fishing (topless), their faces painted in red with interesting patterns. Onwards we sailed into Yimas Lake, into which the Karawari River runs, and here we stopped for lunch. After our picnic, we floated back to the nearby Yimas Village where we were treated to a weaving demonstration from some local women. 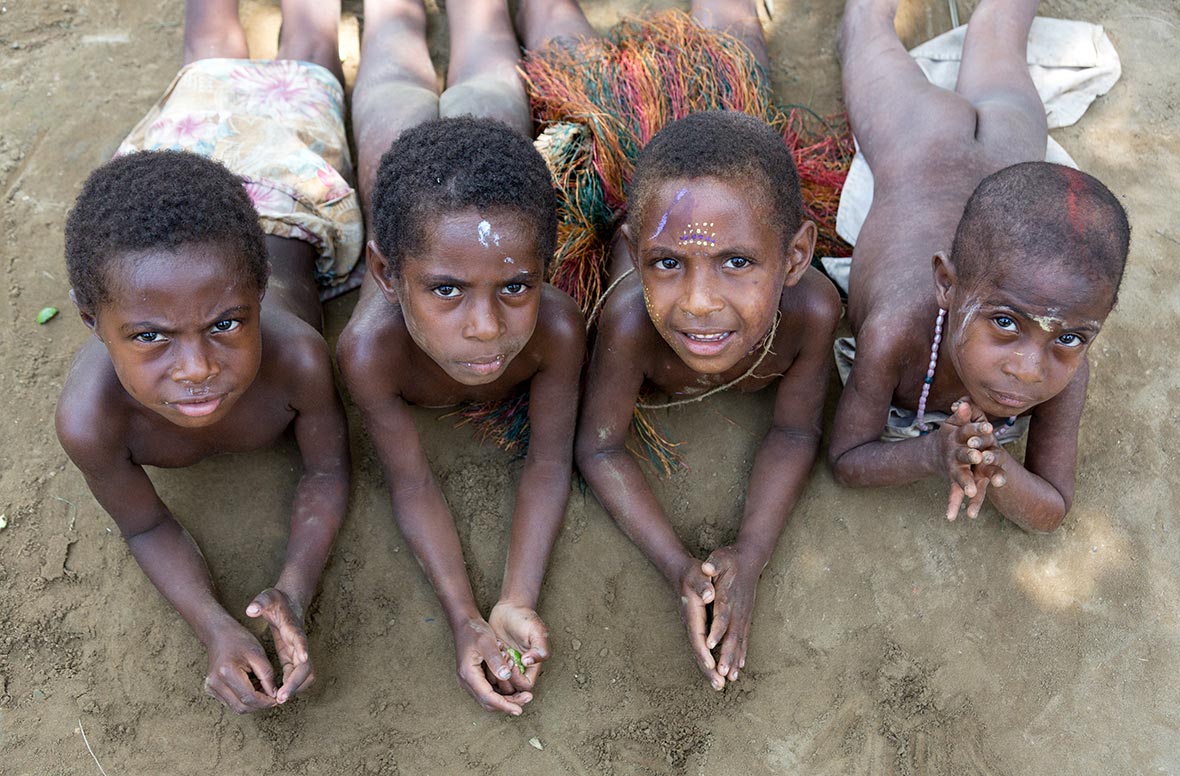 At this point it was only 3pm, and with plenty of afternoon left to explore further, we headed an hour in the opposite direction and stopped at Konmei Village, home of the Yokoin Tribe. Konmei was a busy village, featuring a particularly interesting “men’s house”, which was full of wood carvings and ceremonial objects. A large group of children started following us around and seemed to get quite a kick out of having silly foreigners in their village; for my part, I managed to get a great photo of them all smiling and laughing.

The highlight of the day was a victory dance that the villagers put on for us. Called “Masingin Siaa” in the local language, the performance included a group of men, their bodies painted white, dancing in a circular pattern, singing and playing drums. After the dance we chatted with the villagers, took some photos and said our goodbyes, at which point the children ran into the river to send us off in our boat. During the course of the day, our guides had received word that our elusive Crocodile Man had walked far away to the next village with his pregnant wife. And so, we made our way back to the lodge for an early night once again. 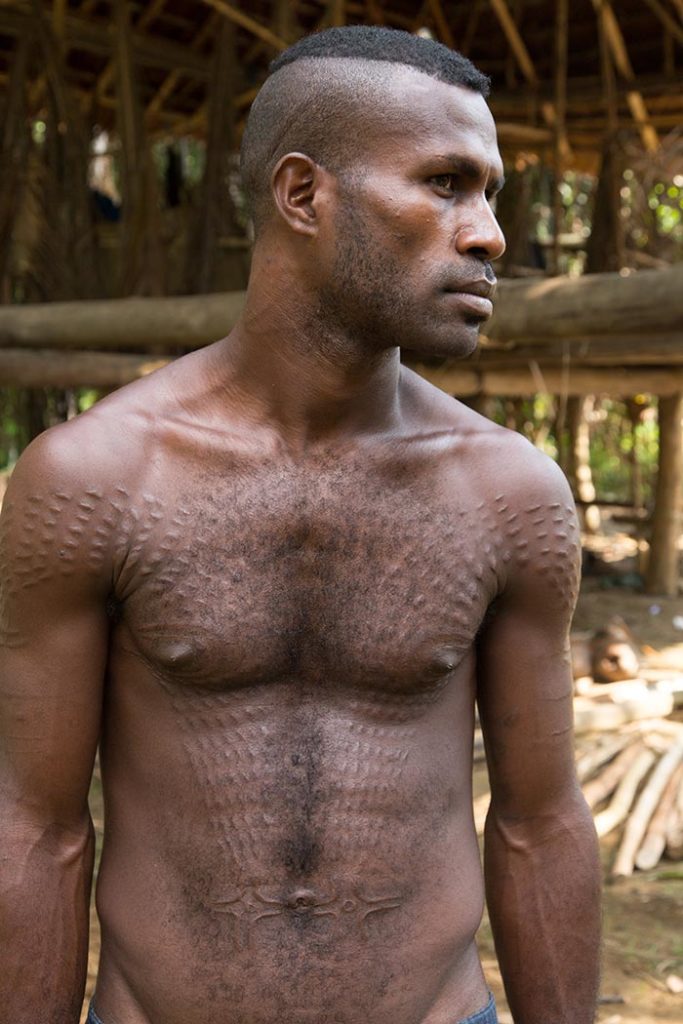 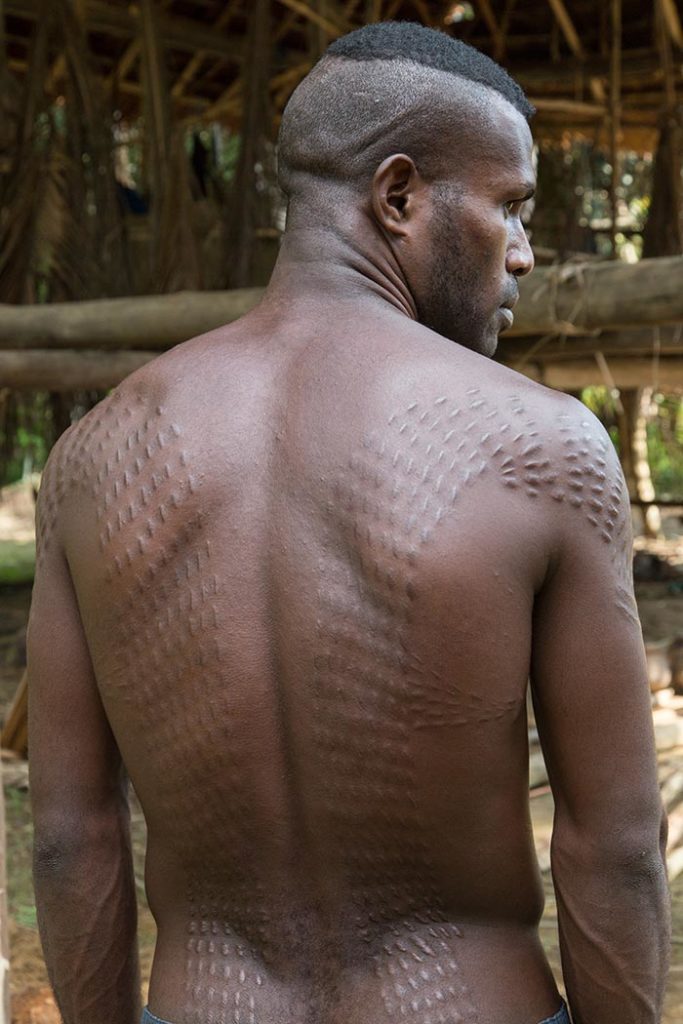 The next morning, as we were boarding our boat to head back to the landing strip, our guide told us that we were in luck – he had found the crocodile man and he could come with us if we wanted. We had a brief chat with him on the way, and took some photos with him near the landing strip. We learned pretty quickly that crocodile men don’t pose for free but it was an interesting experience and worth paying for. After the morning’s excitement, we boarded our aircraft bound for Tari in the western highlands of Papua New Guinea for further adventures… 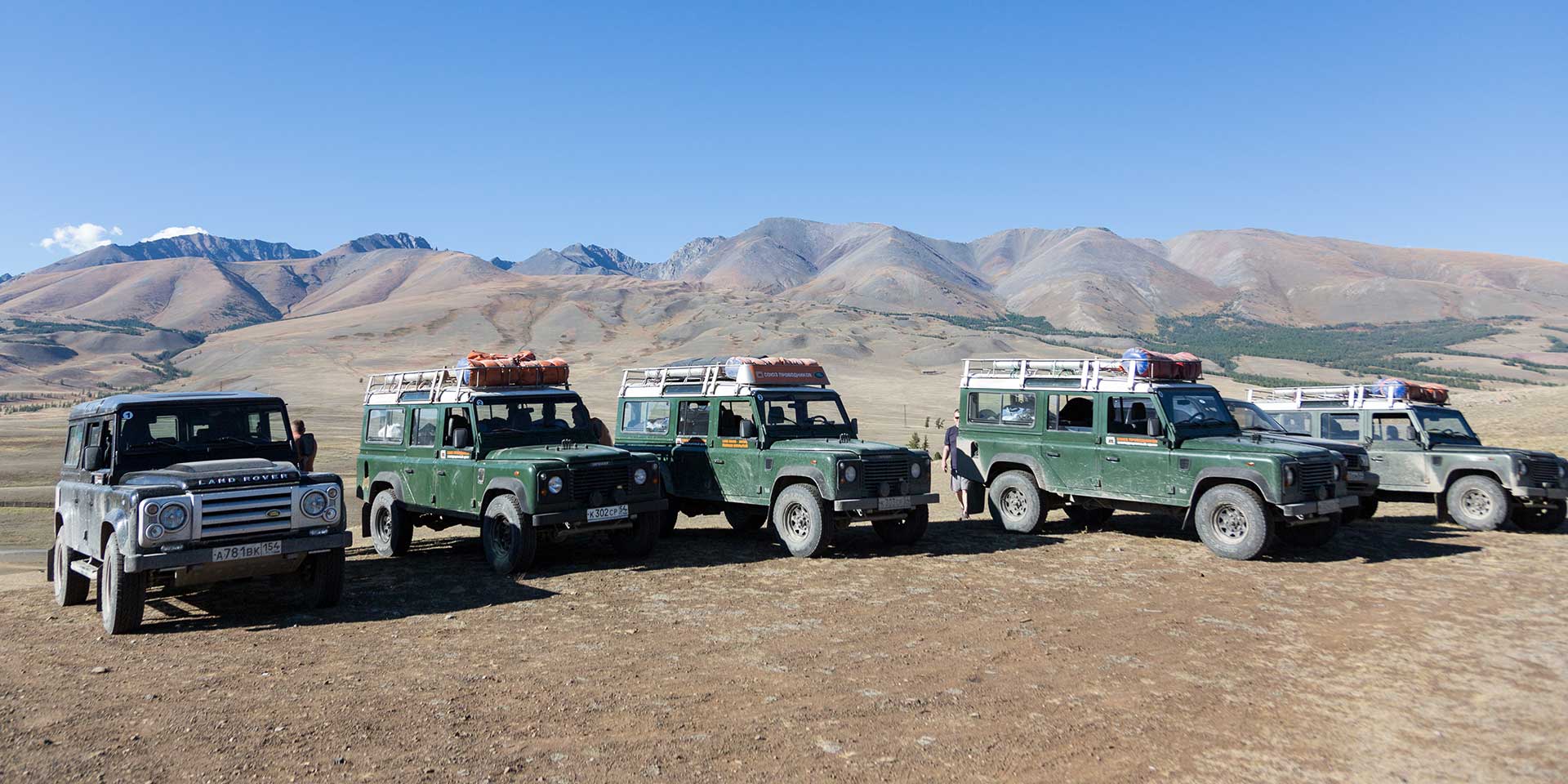 Into the Altai Mountains: An Epic Siberian Road Trip 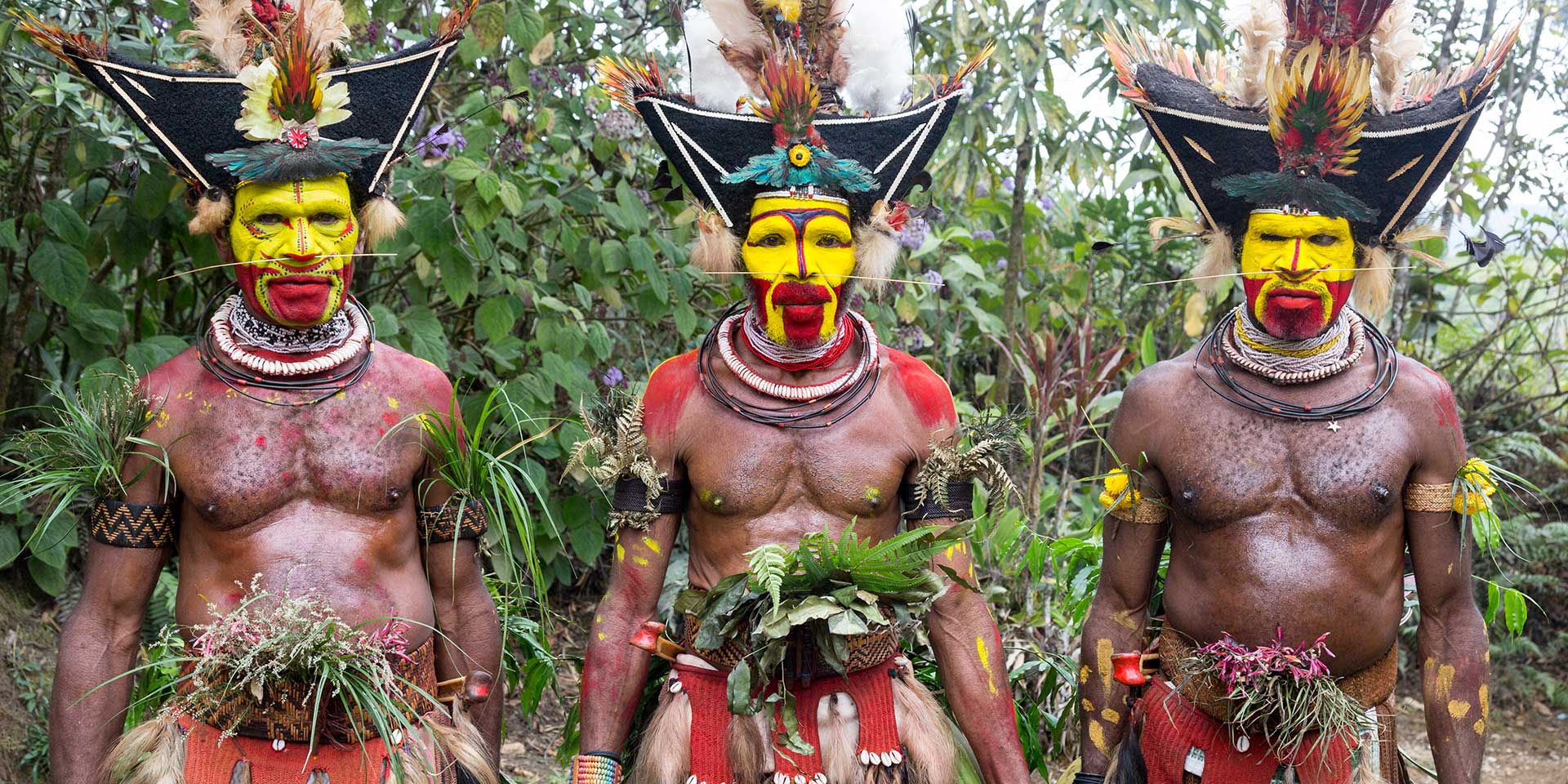 Hold Onto Your Wigs: Days of Wild in Tari