Myanmar: Where Even the Rocks Are Paved With Gold Golden Rock, known locally as Kyaiktiyo Pagoda, is located in the Mon State of Myanmar, about a 130-mile drive from Yangon. One of the most sacred sites in Burma, this is where candle-lit vigils, prayers, travelers, tourists and photographers amalgamate to create an interesting outing. Those who visit seem as if they’ve been summoned and perhaps even captivated by some secret siren’s song. I recently journeyed to Golden Rock on an searing hot day to witness its allure for myself.

The four-hour drive from Yangon to the Golden Rock passes through Bago and continues into the Mon State. I took a day-trip from Yangon, which involves a very long day of travel indeed. If you were to take this trip, you would be departing at 5 a.m. from your hotel, and returning at around 5 p.m. Most tourists stay overnight at Golden Rock, making the the trip a bit easier from a physical and logistical point of view. However, the hotels on-site are not of a very high standard. The best hotel at Golden Rock is the Kyaik Hto Hotel. 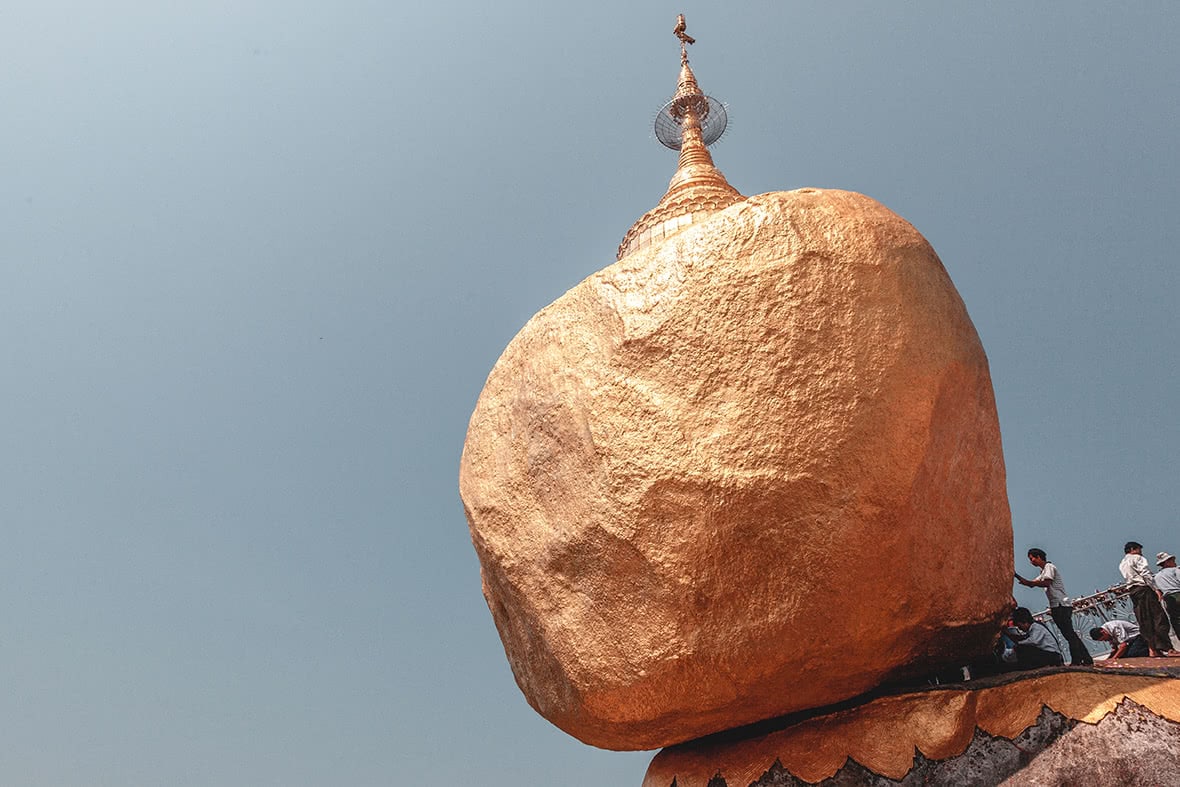 I set my sights on Golden Rock, an image that has become iconic for Myanmar. I had always wanted to take a definitive photo here, but it never seemed worthy of taking a full day’s journey just to see this singular destination. Yet after visiting Myanmar over a period of 20 years, I decided it was about time. What I was about to learn (and have seen many times in the past), is that the trip is more about the journey than the destination, a slice of wisdom that cannot be overstated. How you get there, as well as with whom you travel and befriend along the way, can make all the difference in the world.

To me, 5 a.m. is a horrible time to go anywhere, even on the best of days. However, in Myanmar, any negative thoughts about one’s early rising tend to quickly disappear once the sun starts to glimmer on the horizon. It’s truly magical watching rural Myanmar wake up: the mist rises over the rice fields and pagodas; people are begin their days, and go about their daily business; monks leave their temples and walk through the villages to receive their morning alms; temples glimmer in the orange-laden first light of the day. As soon as I emerged from Yangon, and the sun was rising, I felt a sense of excitement for the journey upon which I was embarking.

Our first stop was Bago, at 7 a.m., just after sunrise. We went to Kyaikpun Pago, famous for its four gigantic Buddhas. It was beautiful in the early morning light, and I had it all to myself. Bago is an interesting place. Legend says it was founded by two Mon princesses back in 573 A.D. The Lord Buddha predicted a Kingdom would arise in this very place – and it did.

The earliest mention of this city in history comes from a traveler named Ibn Khudadhbin, who visited and wrote about Bago in 850 A.D. A thousand years later,  the British Empire annexed the area. Regardless, Bago retained a strong focus in Buddhist lore. 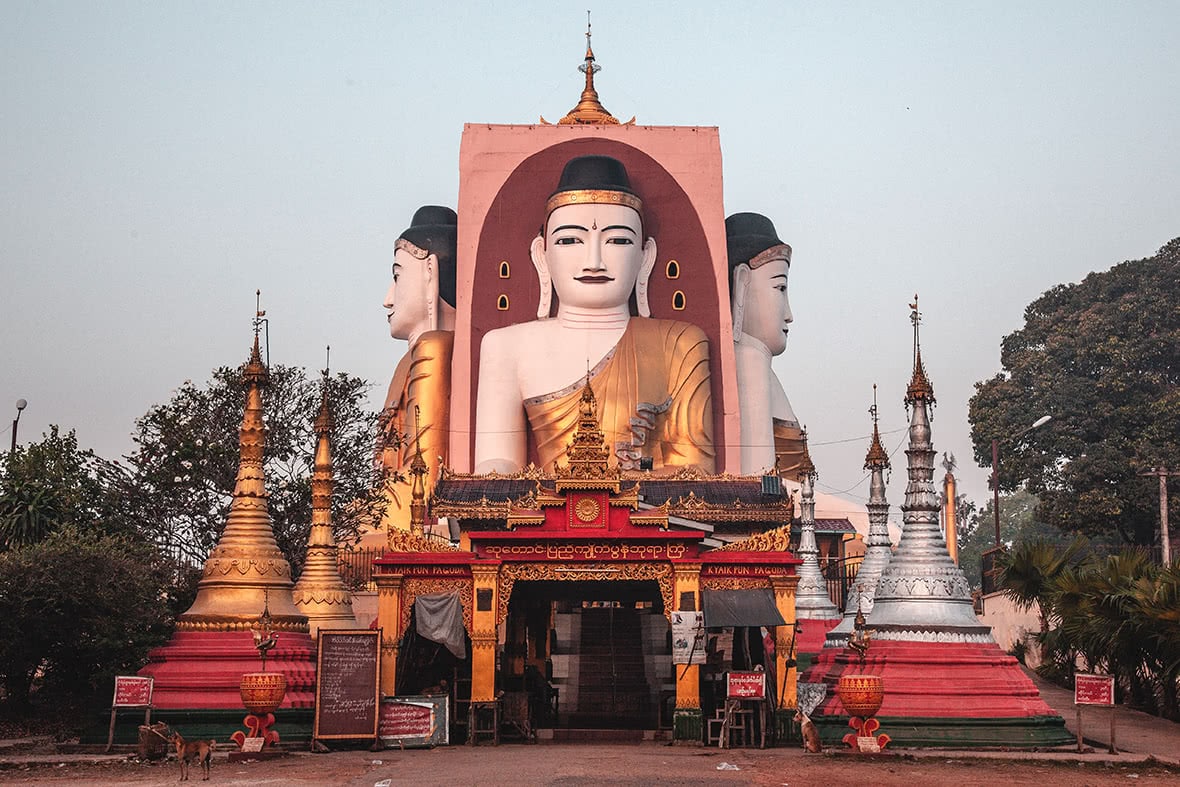 As for the term Kyaikpun Pago, it comes from a Mon lexis: “Kyaik” (Buddha) and “Pon” which means “Four,” relating to the Four Seated Buddha shrine about about 27 meters high. , where four Buddhas areseated back-to-back in four positions and in four directions. This amazing landmark was built in the 600s (A.D.) by the Bago King Migadippa andrenovated around the time of Columbus, by King Dhammaceti.

Monks were passing by for their morning alms as I was leaving. I took some photographs, doing my best to blend in with the scene at large. 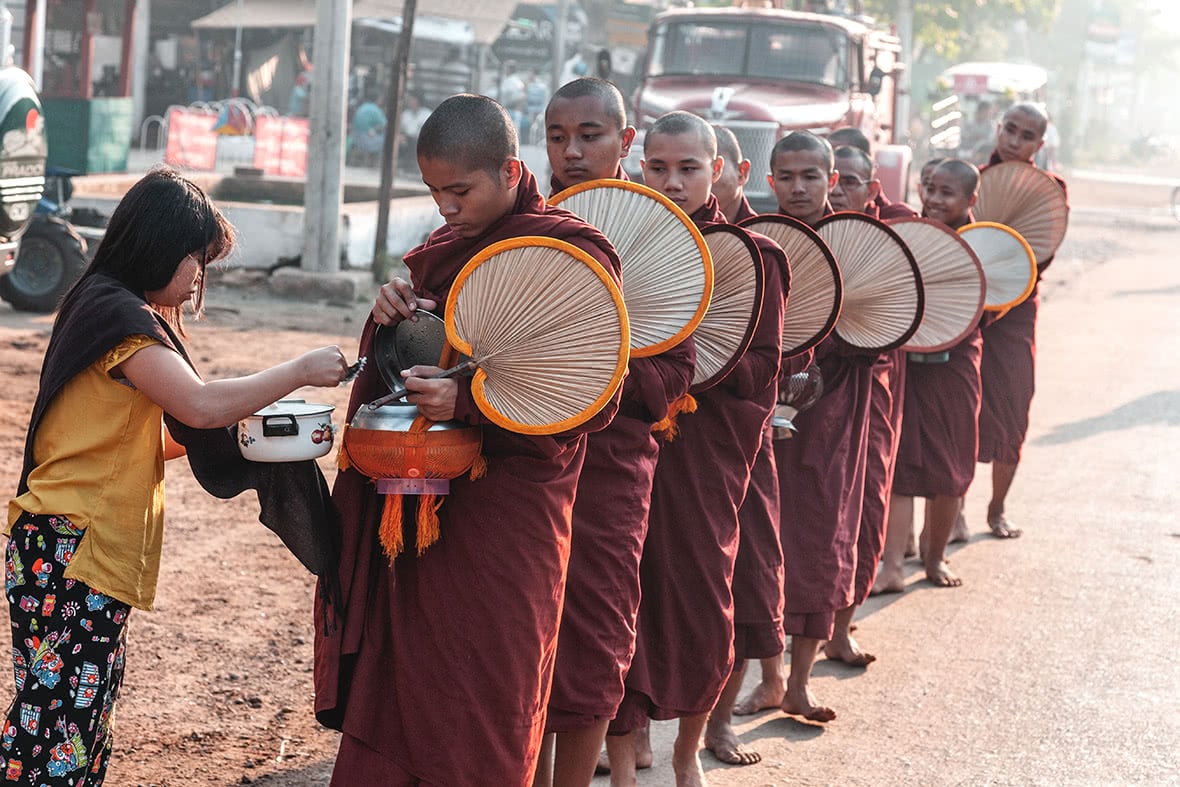 Next was the Shwethalyaung Reclining Buddha, 55 meters long and 16 meters high, making it the second-largest Buddha in the world. The original Buddhist statue is believed to have been built in 994 A.D, just before the First Crusade was launched in Europe. By the time I arrived, locals were already worshipping in the temple.

As if out of a page from Indiana Jones, the Shwethalyaung Reclining Buddha, as massive as it is, was actually “lost” to the world in 1757 when it was pillaged. It wasn’t until later, in the epoch of British India, that the Shwethalyaung Reclining Buddha was rediscovered under a huge canopy of jungle growth. A restoration project began around 1880 and thethe Buddha’s mosaic pillows were made an addition in 1930. Leaving Bago, we passed Shwe Maw Daw Stupa, resembling the more famous Shwedagon Pagoda in Yangon but actually larger. It is often called the “Golden God Temple,” soaring 115 meters in height, making it the tallest pagoda in BurmaBuilt around 1000 A.D, itwas destroyed several times by horrendous earthquakes, including two particularly terrible ones in 1917 and 1930. The original pagoda here is said to have housed two of Buddha’s hairs. These hairs were personally given to two Mon merchants on a trip to India by the Buddha himself. Tooth relics of the Buddha were added in 982 A.D. and 1385 A.D. 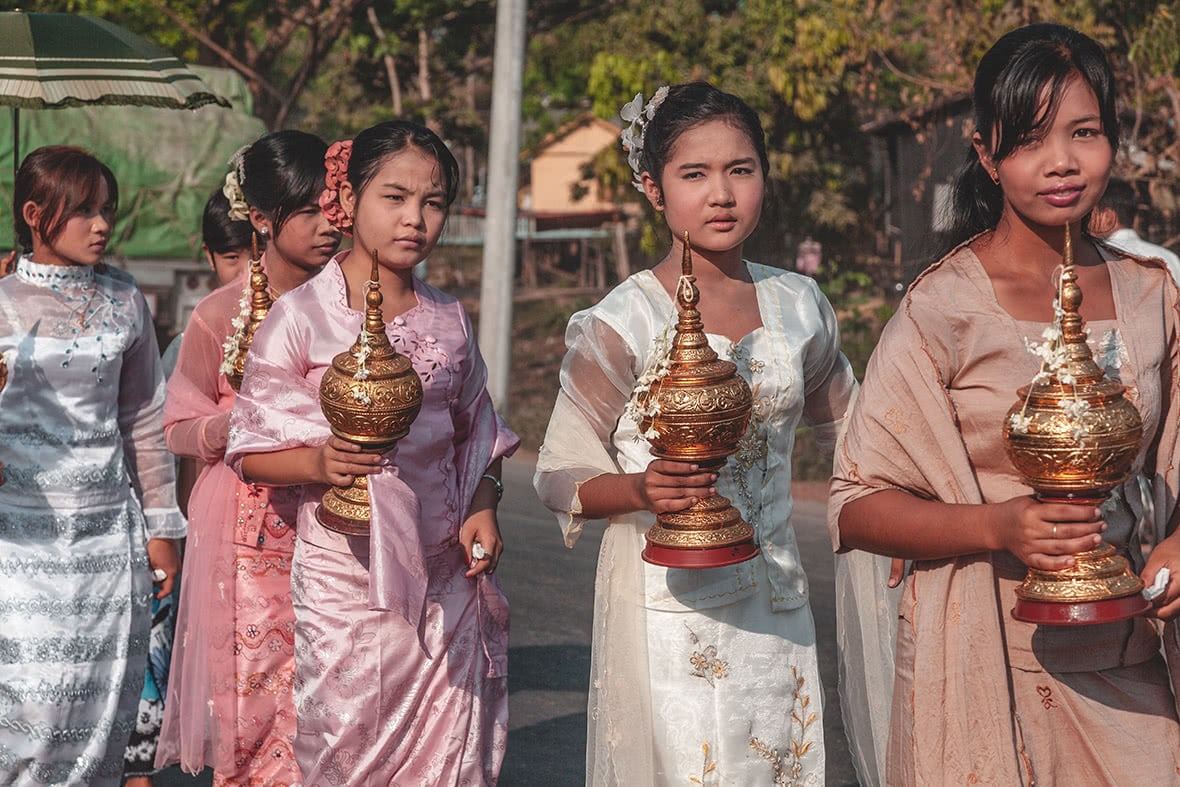 Family members of the novice monks join the procession

As we were leaving Bago, there was suddenly a traffic jam, which seemed strange for 7:30 a.m. on a Saturday in rural Myanmar. Yet it turned out there was a procession of novice monks (and their families) on their way to the temple for a head shaving ceremony. To become a monk, you must make certain changes, wear certain clothing and, of course, shave your head. There’s no time limit for the amount of time one must spend as a monk. One could become a monk for 20 years or even 20 minutes if they so wished. When becoming a monk, shaving one’s head is an important ritual that has a deep meaning and represents the  sincerity of the pledge. 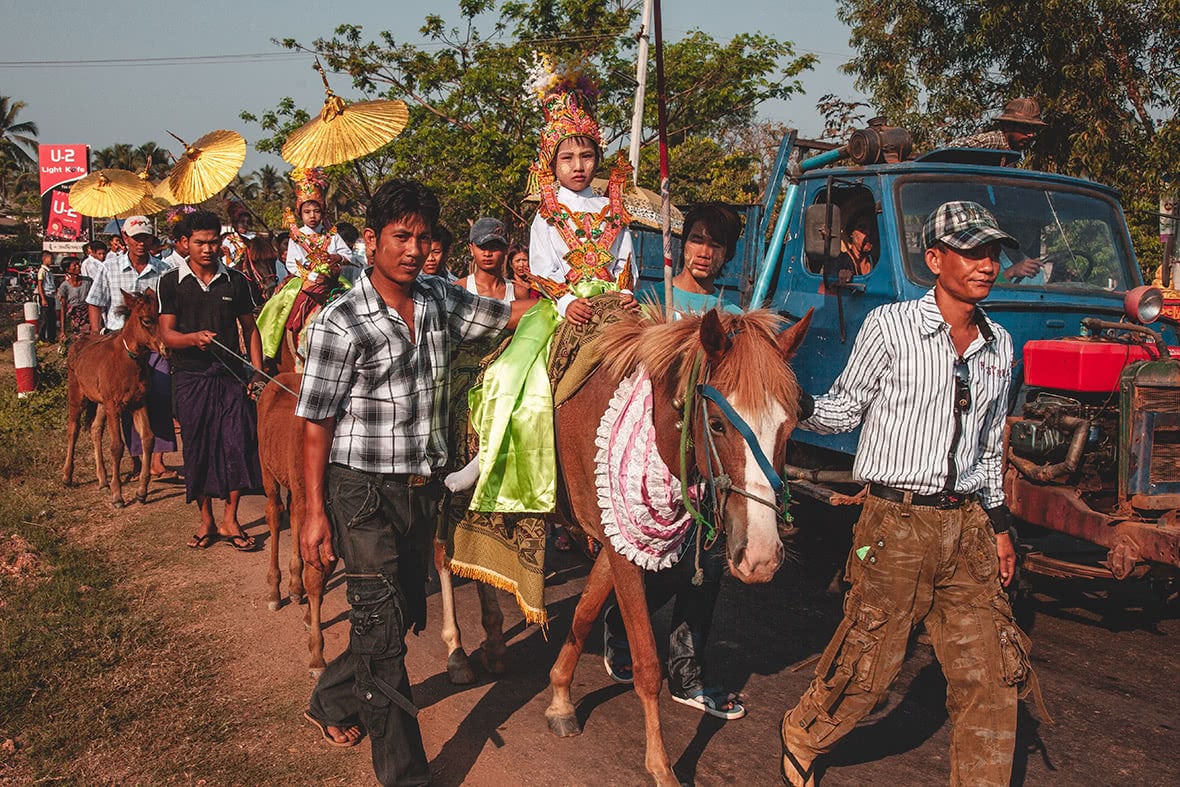 A novice monk procession in Bago.

I was lucky to encounter this scene in a village as the novice monks were riding about on horseback, faces painted, and wearing colorful costumes. This was truly a stroke of luck. In a juxtaposed situation, a similar ceremony in Yangon carried out by a similar troupe would be done in motorized transportation. There were probably 10 novice monks, from as young as five years old to early teenagers. Their entire families also took part in the procession — first the elder men on horses, with elaborate umbrellas, next the novice monks, followed by the women. There was a long procession of the prettiest girls in the village, all carrying gold. The reason for this is simple: the Burmese do not trust paper money, made from ink and paper, or even digits on a computer screen, but rather gold to facilitate trade. The Burmese people, in general, have always worn gold in some fashion.  It is integral to their culture.

Near the end of the procession was a portable “band,” with drums and a keyboard on the back of a bicycle with a loud speaker. There was also one man dressed in a traditional manner who was  dancing away. It was, in a word, festive. But more than that, it was authentic.   Best of all, as a Westerner, I was thrilled to have the chance to witnessit. Although I have seen a head shaving ceremony a few years beforein Yangon, I had always wanted to observe this sort of procession in a more rural environment, so I felt extremely lucky that day. 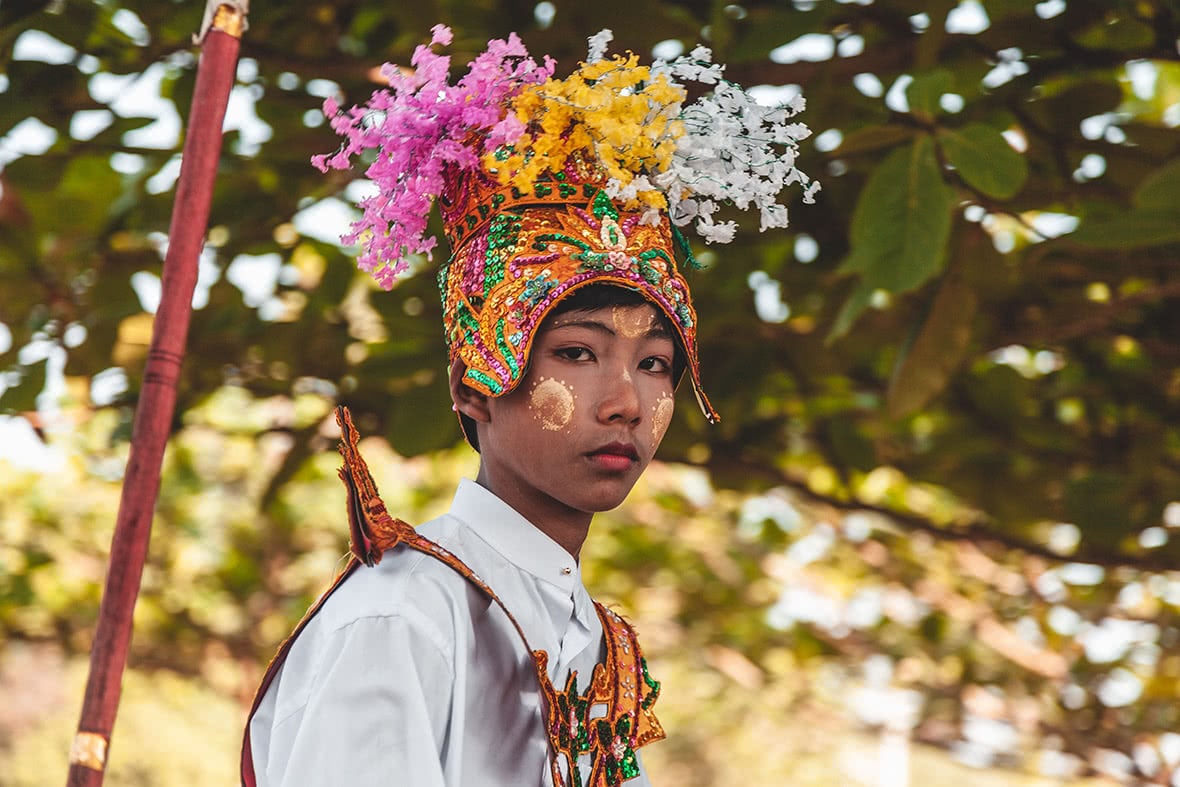 A teenager about to become a novice monk

Having taken in this wonderfully unexpected ceremonial procession, we still had a three-hour drive to the base of the Kyaiktiyo Golden Rock. Arriving at the base revealed a chaotic scene. I was the only foreigner there, but there were literally hundreds of local pilgrims. It is required for visitors to board the open air bed of a truck and be driven 45 minutes to the top. Every time a truck pulled up, people scrambled for position inside, with me continually missing my chance..

Eventually, I found an opening, and climbed up the small stairs, cramming myself into the back of a truck. This was purely a “cattle class” drive. I knew it was hot that day, but from the air-conditioned car I hadn’t realized the temperature was actually 42°C (107 F) out in the full power of the sun. The truck raced up the mountain at breakneck speed, and I felt a little less than safe. But these are the risks one takes to reach new heights (literally!) of travel.

The truck was so packed I felt like a refugee rushing to the border.

The truck stopped three times on the way up: twice to ask for donations, and once to wait for other trucks to come down as the final approach was too narrow to allow two-way traffic. It was unnerving and even harrowing at times

When we finally arrived, in the distance I could see the colossal, gleaming Golden Rock. By now there were not hundreds, but thousands of pilgrims in the area, most of them having stayed overnight. I had always thought that the Golden Rock was painted gold. However, this being Myanmar, I learned that it is actually completely covered in gold leaf – two metric tons, as my guide pointed out. That’s pretty impressive if it’s true.

The Burmese people adhere gold leaf strips to the rock, as a form of worship. Women are forbidden from touching the rock, so it is the men who affix the golden leaves. Real yellow gold leaf is more than 90%pure. Since it’s pretty unrealistic to examine each piece of gold leaf attached to the rock, objectiveness might infer that the rock’s gold varies in purity. Could very poor pilgrims afford real gold? Regardless, this only adds to the mystery and allure of the place. It is amazing that despite numerous earthquakes, Golden Rock has never fallen down.

There is a small stupa on top, of this sacred rock, kept in place – according to legend – by a single strand of hair given by the Buddha to a hermit who thenthen gave it to his king, with the instruction that it should be placed under a rock that resembled the hermit’s head. Hence its name “Kyaiktiyo,” meaning “Pagoda on a Hermit’s Head.”

Golden Rock is an impressive site, and it lived up to the photographs I had seen of it in the past. I photographed the pagoda from a variety of angles, before it was time to make our way back to Yangon. But first I had to board my “favorite” truck for another 45 minutes of frying pan hell – I later learned that there is a way around this, as for a price, a private truck can be hired. 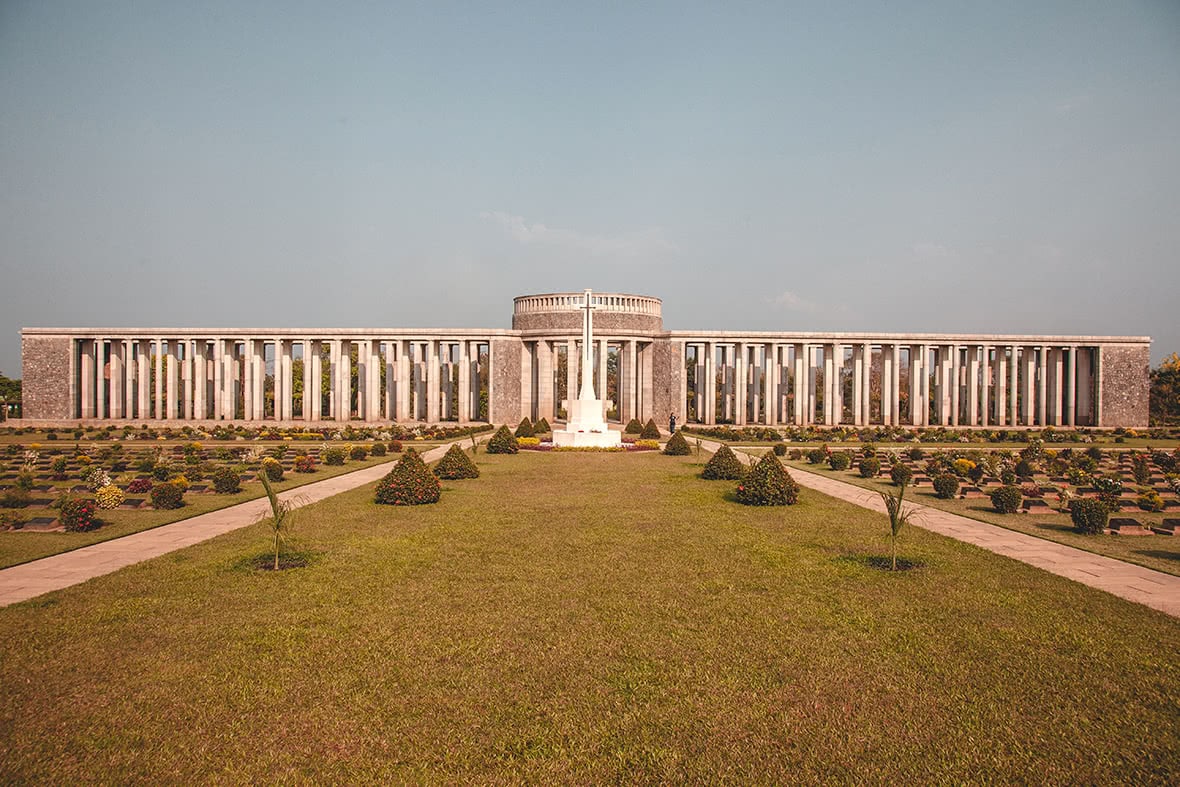 We took the highway back to Yangon and stopped briefly at the Taukkyan War Cemetery, with its graves of 6,374 soldiers who died in World War II.   The Burma Theater confronts a wide range of issues: The Burma Railway, as a path to India; Karen rebels fighting in the anti-Japanese resistance; crude oil; and other tangents. Taukkyan also provides a remembrance for the 27,000 Commonwealth soldiers who died fighting in Burma. Many or most of those buried here are from India and Africa. Five soldiers buried on-site were honored with the Victoria Cross.

My trip complete, I returned to Yangon, tired but wiser on many levels. And though Golden Rock was indeed a highlight, this trip epitomized the saying, the journey is more important than destination. 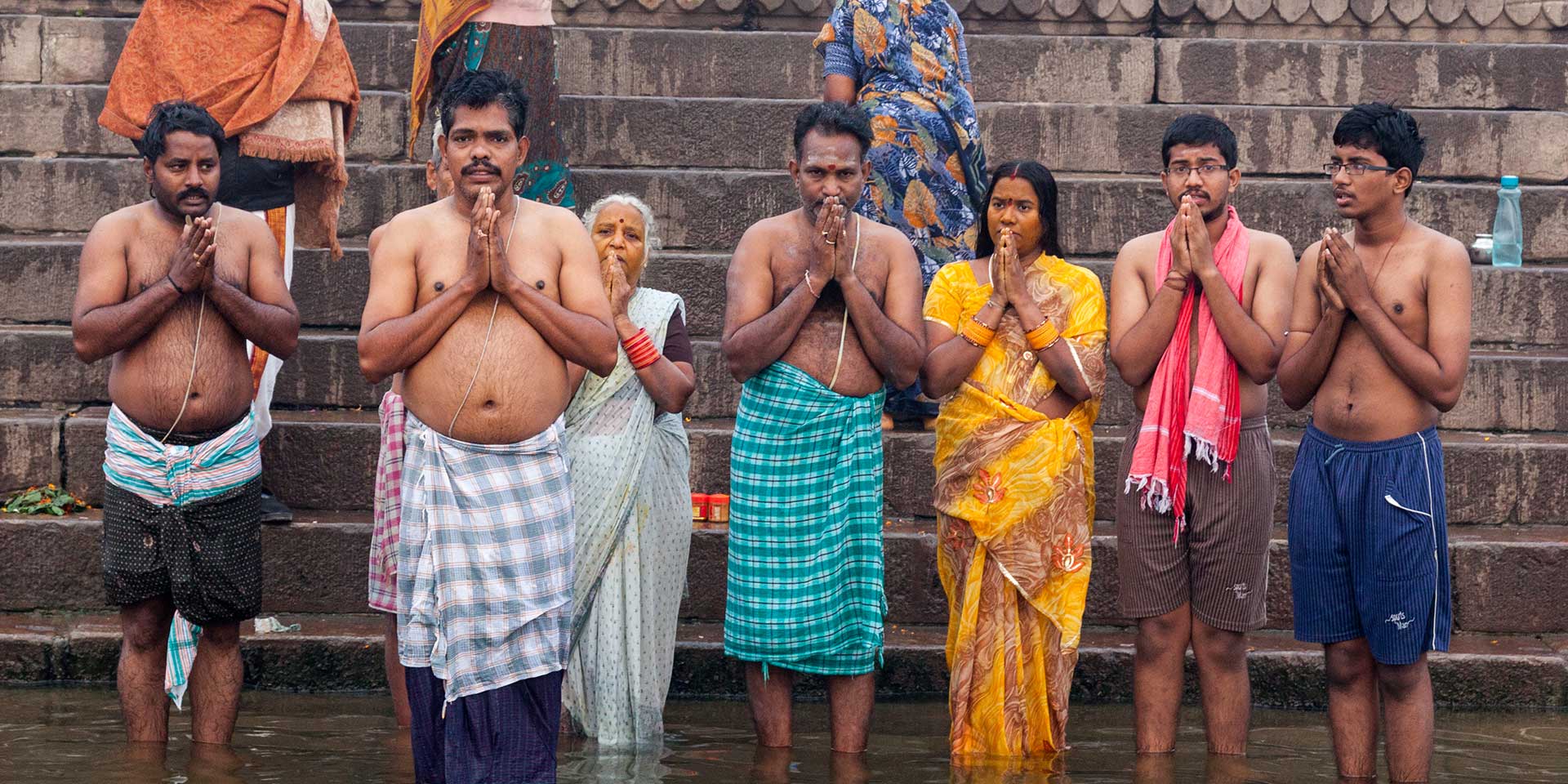 Varanasi: The Tale that the River Told