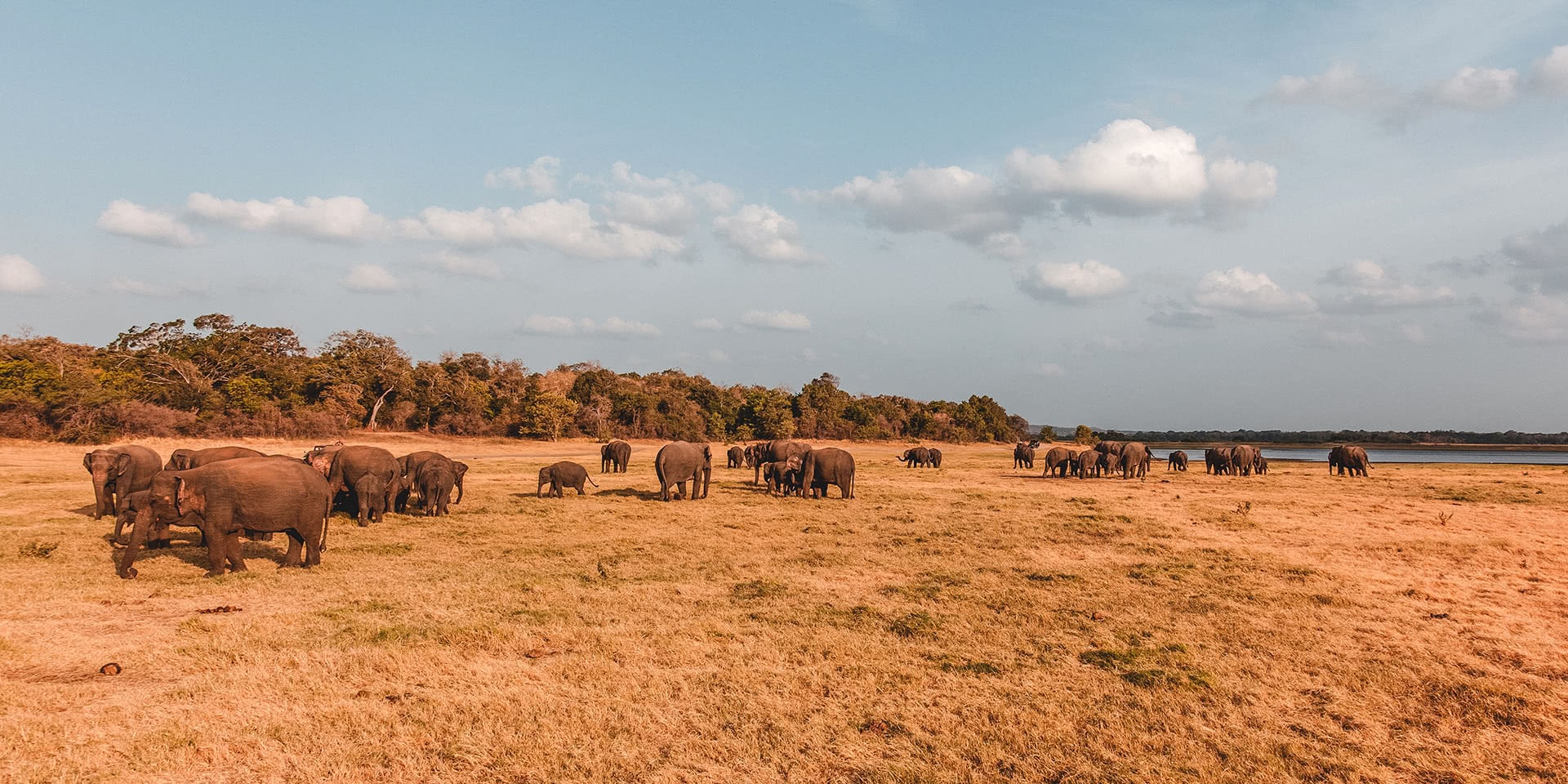 Having lived in Thailand for a long time now, I am relatively accustomed to seeing elephants in parks, riding them and feeding them. But here in Thailand, most of the elephants you’ll see are in captivity – sometimes well-treated, sometimes not, but it is extremely rare to see them in the wild. So on a recent trip to Sri Lanka, I was excited to visit Minneriya National Park, where it’s possible to see the magnificent beasts in the wild.

Minneriya National Park is one of Sri Lanka’s most popular wildlife parks, second only to Yala National Park. It is a short one-hour drive from Dambulla, in the heart of central Sri Lanka. Located on what is known as the Elephant Corridor, which also includes Kaudulla and Wasgomuwa national parks, this lightly forested area is where elephants congregate in the dry season when the waters elsewhere dry up. This large throng of elephants is known as “The Gathering,” which may sound like the sinister title of a horror movie, but is actually a peaceful sight, with as many as 300 of the beasts grazing and lazing about, bathing in the large lake’s refreshing waters. It is the largest meeting of Asian elephants anywhere in the world. The Gathering takes place between May and November, peaking in August and September. I was lucky enough to catch its occurrence close to the peak – in July, and it was truly special. 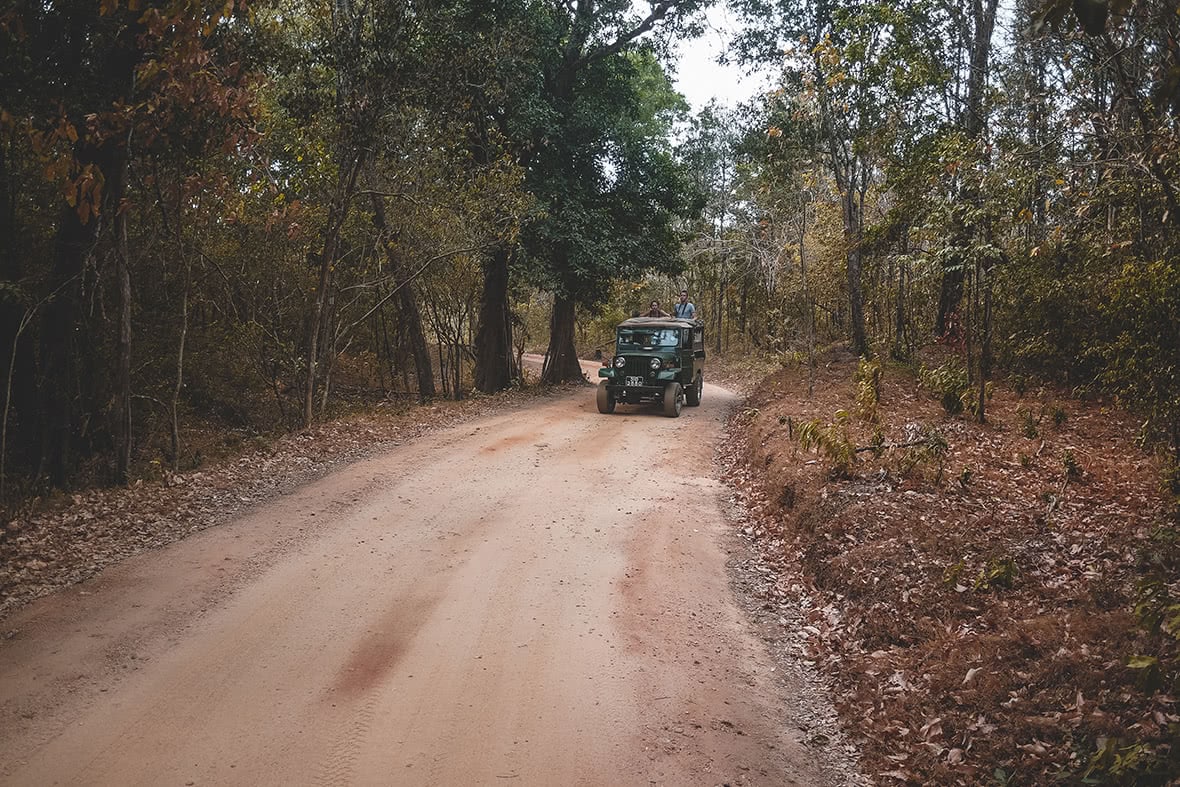 The park is accessed through a dirt road passing through a heavily forested area.

Together with my family, we drove to Habarana for lunch, and met our open-air jeep, which whisked us away to the park. Late afternoon is the best time to visit the park, when the sun is less intense and the elephants emerge from the jungle for their early evening bath.   We had to pay an entry fee – around $30 USD per person, and I was disappointed to see that there were quite a few other jeeps. I am not a fan of overly-touristed spots, and I worried that the crowds would detract from the magical atmosphere. The last thing I wanted was to be in a zoo-like setting flooded with tourists. Thankfully, the park is expansive, so everyone was able to spread out for ample breathing room. I stood up in the back of the jeep and took in the view, thoroughly enjoying this new perspective as I passed the lush green landscape. 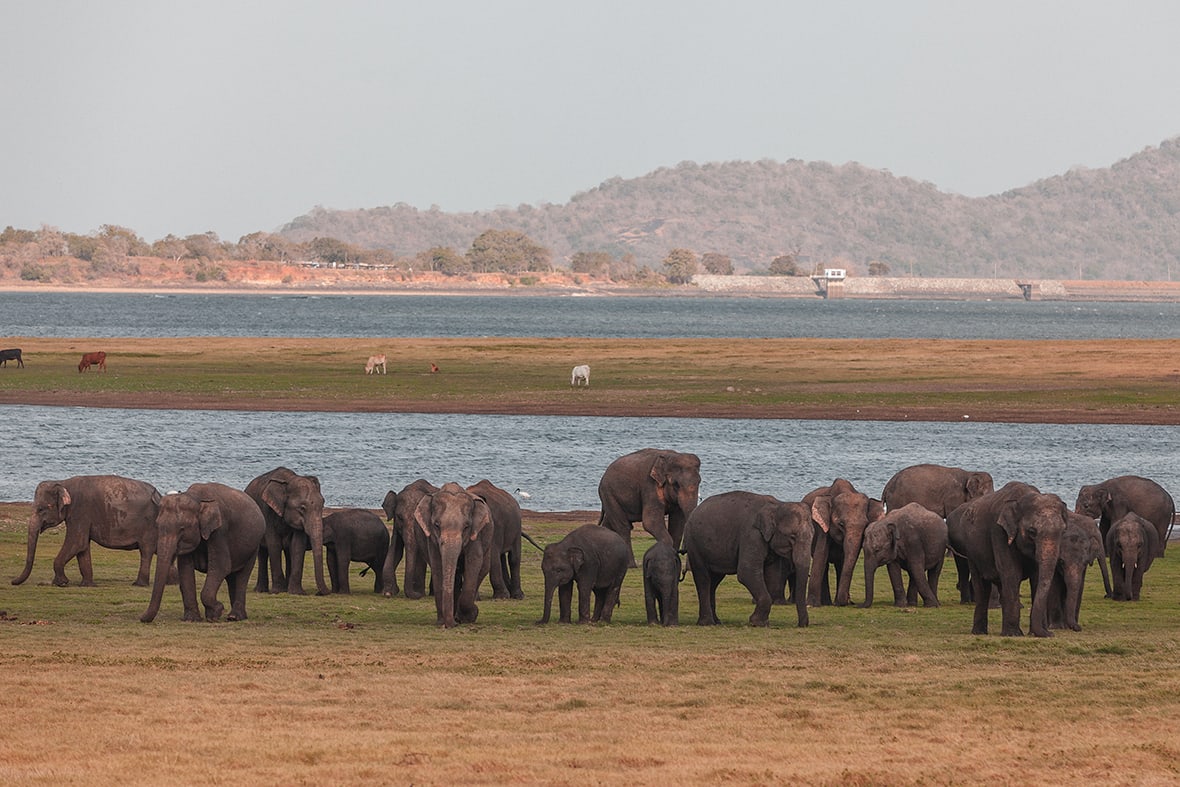 We first came across a herd of approximately 30 elephants near the lake.

As we neared the lake, we caught our first glimpse of the wild elephants – a small cluster, grazing quietly by the water. We stopped for a few minutes to watch them quietly, and then continued on. At this point, we spotted a group of around 30 elephants. We sped towards it – but so did everybody else – and we soon realized there were as many jeeps as there were elephants, each jockeying for the best position. 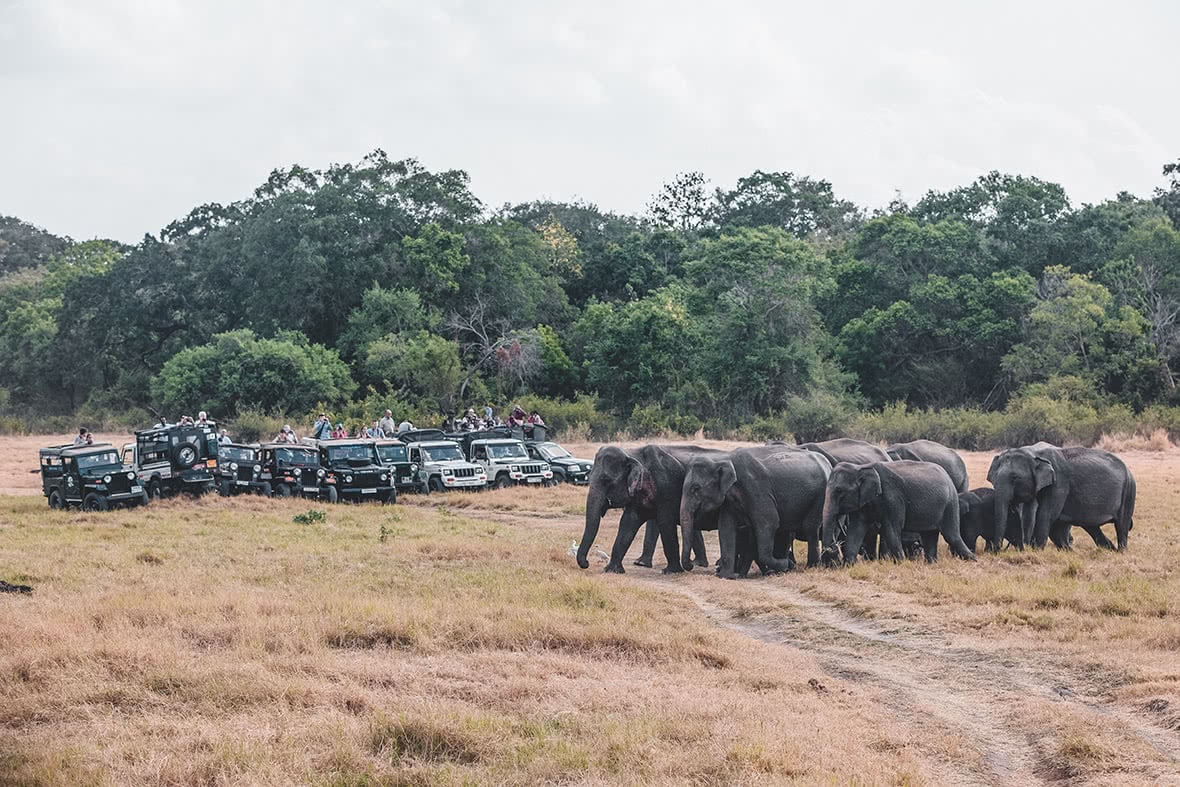 There were often as many jeeps as elephants, so we had to keep moving to find the best spots.

I was a bit put off by the crowd, but it was still truly incredible to see elephants in the wild. Eventually, we headed off to another section of the lake. I spotted some eagles soaring above, and kept my eye out for the more elusive bird species known for frequenting the area, including storks and pelicans, which we saw in great numbers. Also living within the quarters of the park are Purple-Faced Langur and Toque Macaque monkeys, Sambar Deer, and Axis Deer. There also exist sloth bears and about 20 Sri Lankan leopards, though sightings are rare. 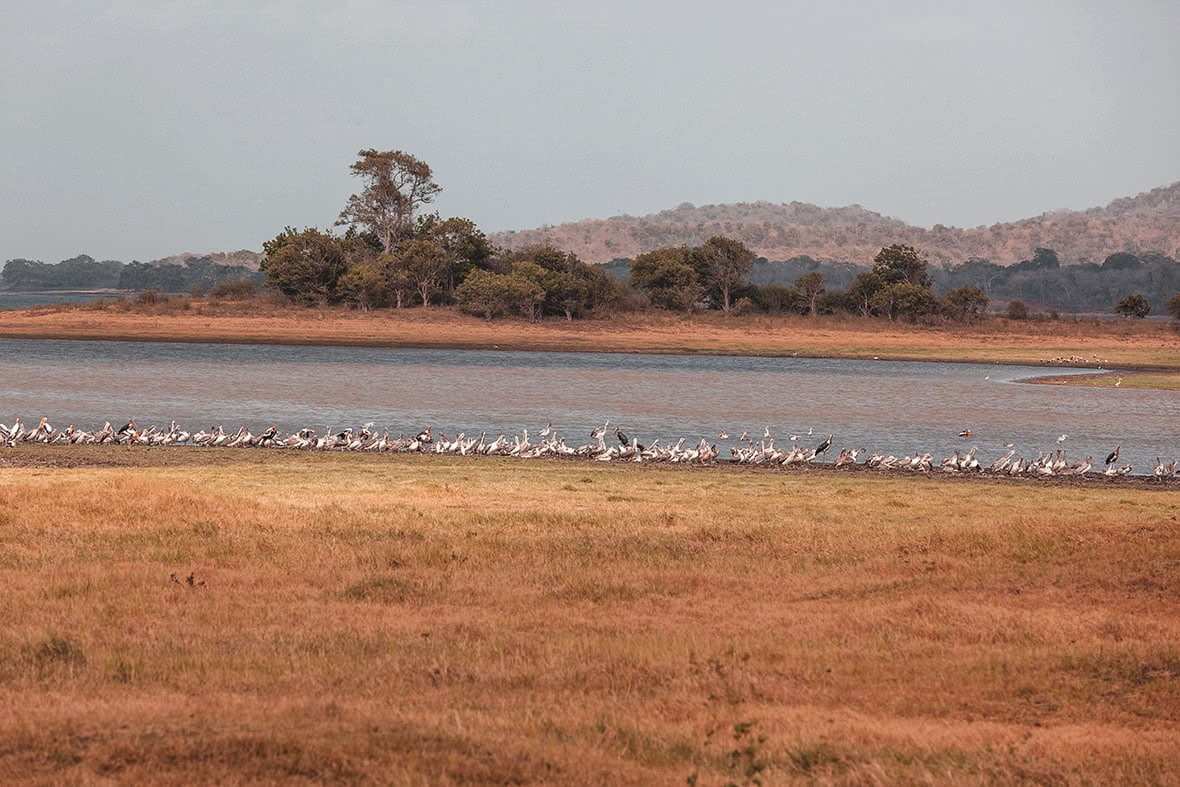 There are a wide variety of birds in Minneriya in addition to elephants.

Eventually, we came upon an even larger group of over 40 elephants, including several babies. Here, unfortunately, there were more tourist jeeps, but luckily they did not obstruct the view of this massive group of wild elephants in their natural habitat. We watched the magnificent creatures for a while, before heading back. On the way, the sun was setting, and we passed yet another group of more than 30 elephants. Our guide commented that the one male standing closest to us was known for charging jeeps, being quite an aggressive creature. It was lucky for us that he seemed to be in a good mood that day! 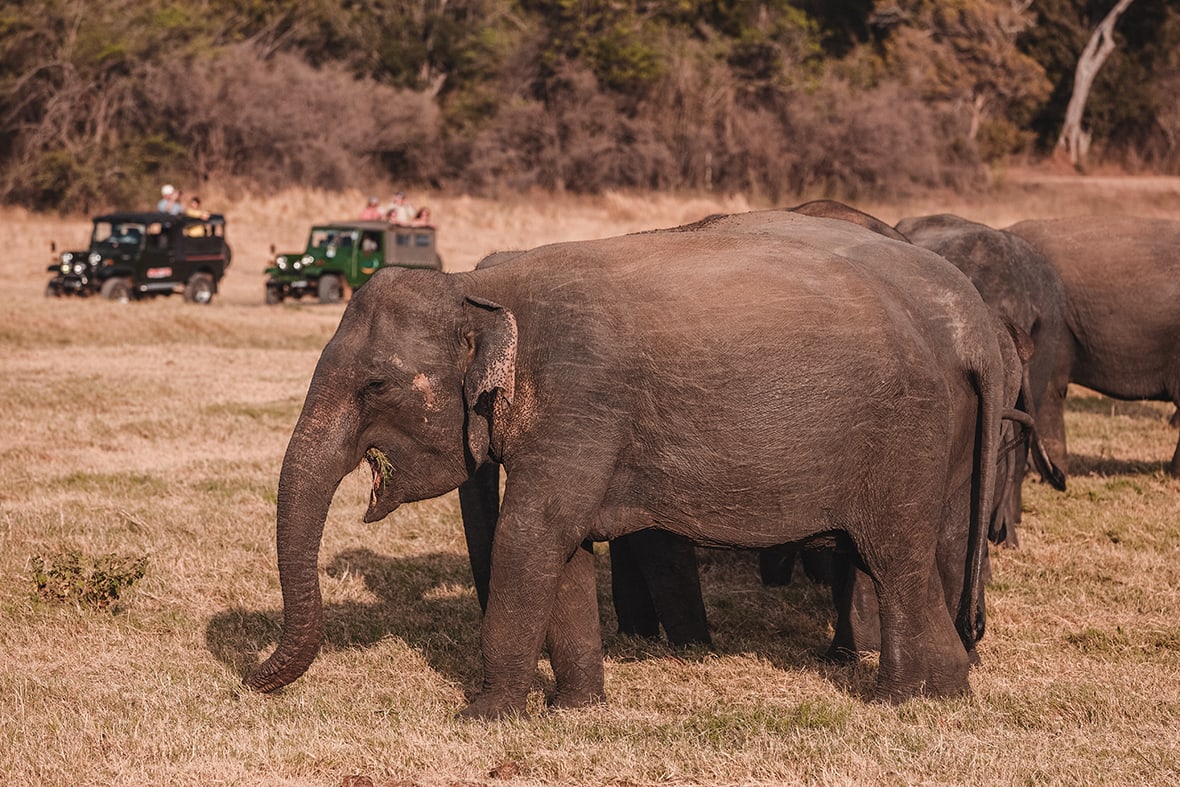 We were often able to get really close to the elephants as they were feeding.

We left the park after having spent nearly half the day in the company of large numbers of wild elephants. The experience was relatively short, but it didn’t need to be any longer – indeed, I felt it was the perfect amount of time. Sure, it would have been better if we were the only tourists there, but it isn’t every day that you get to see 100 wild elephants in an afternoon. I would highly recommend a visit to Minneriya National Park to anyone who visits Sri Lanka. 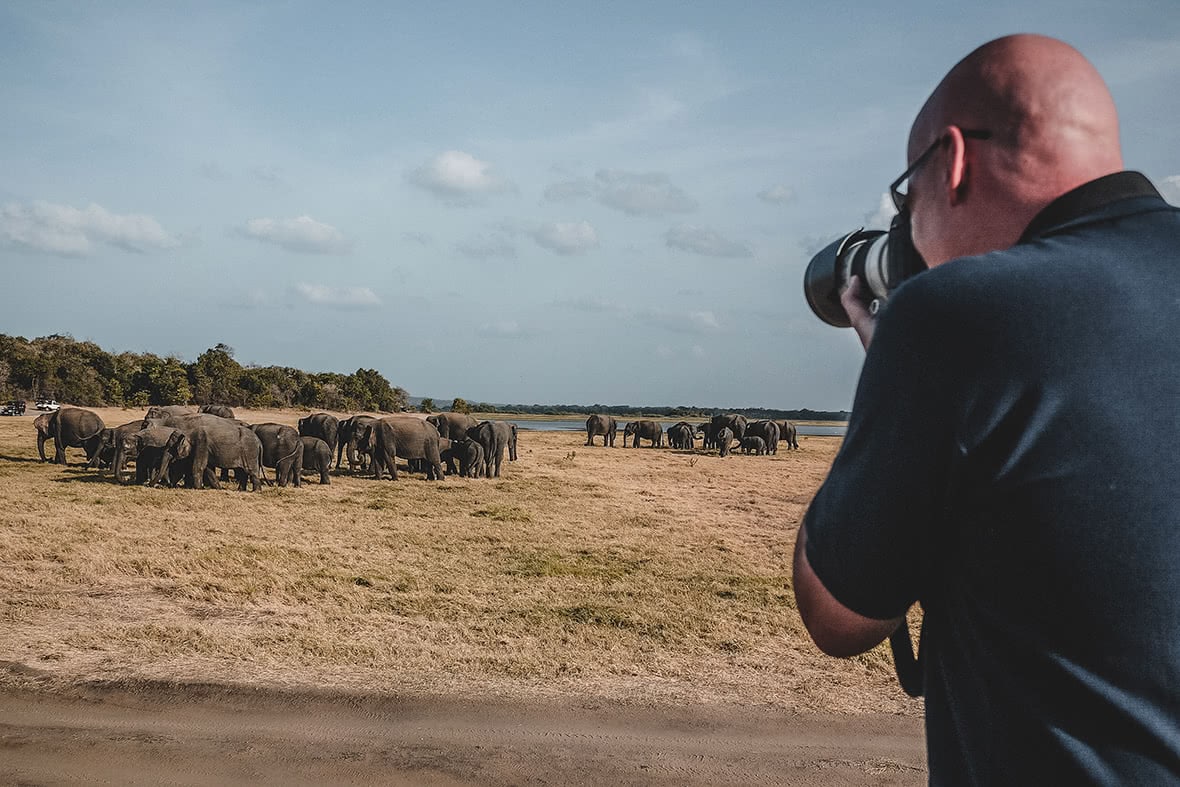 It was a great experience photographing so many elephants in the wild. 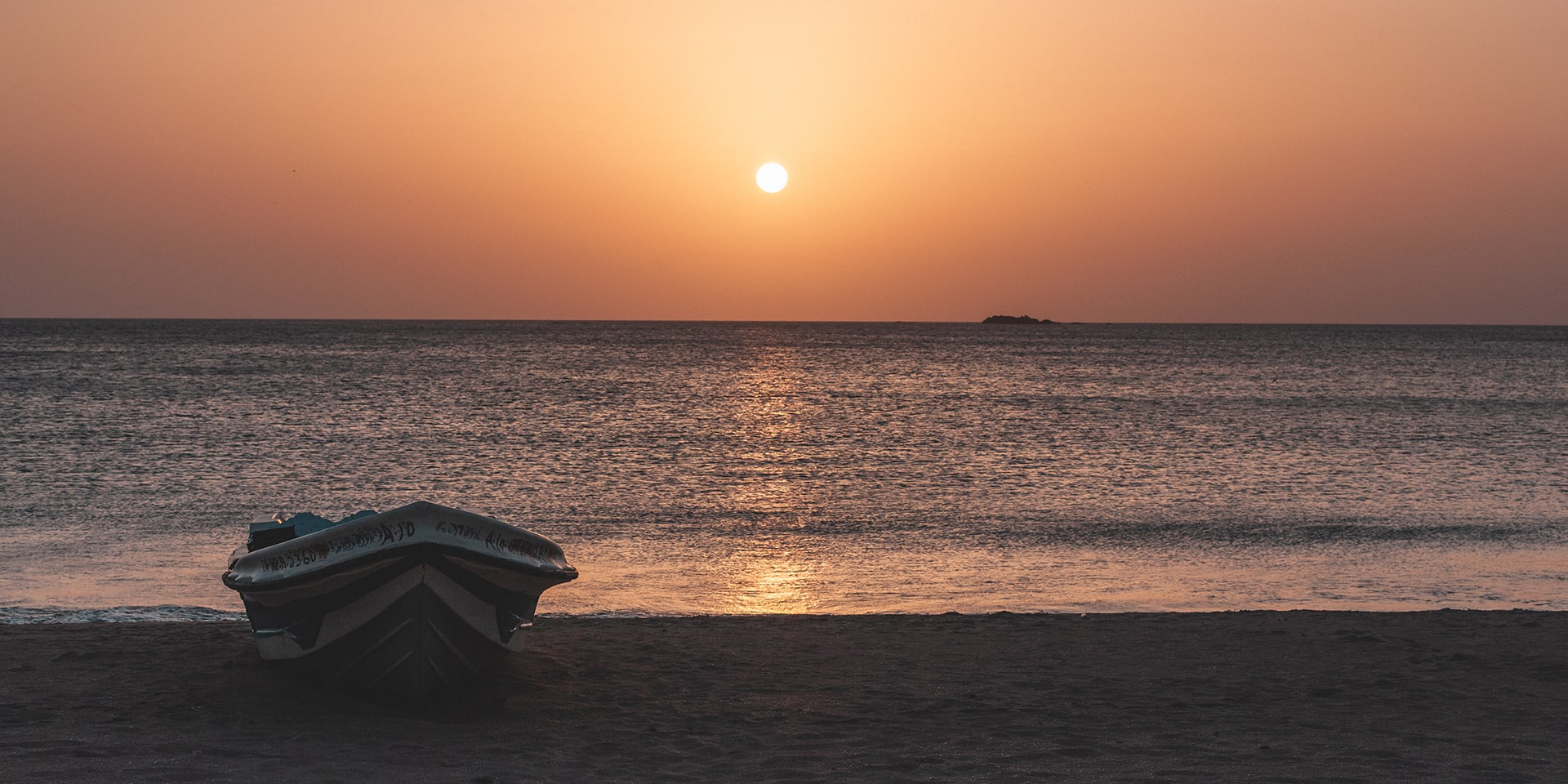 A Whale of a Time in Trincomalee 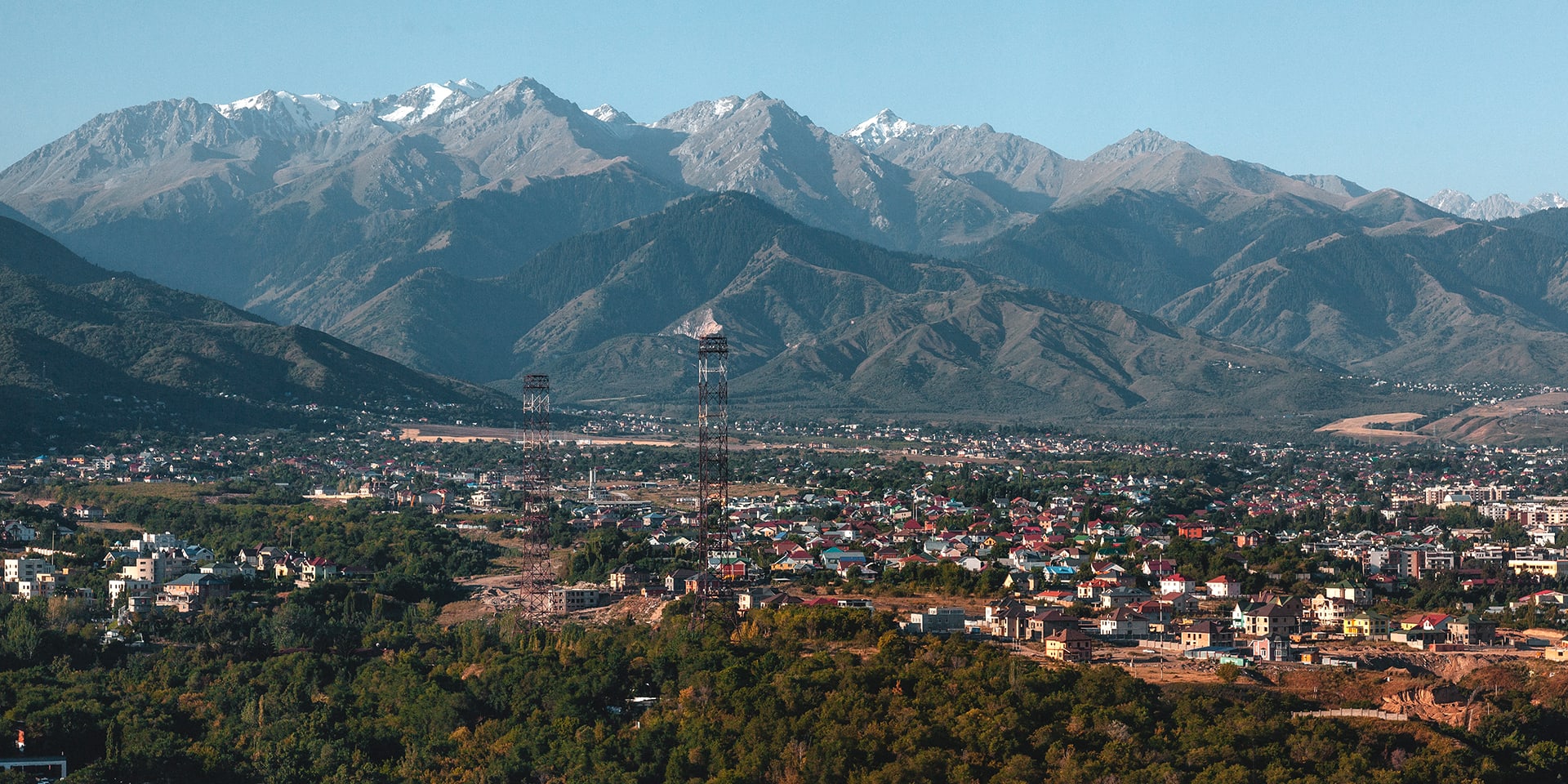 7 Things to See in Almaty