Journeying to the Monkey Monarchs of Lopburi 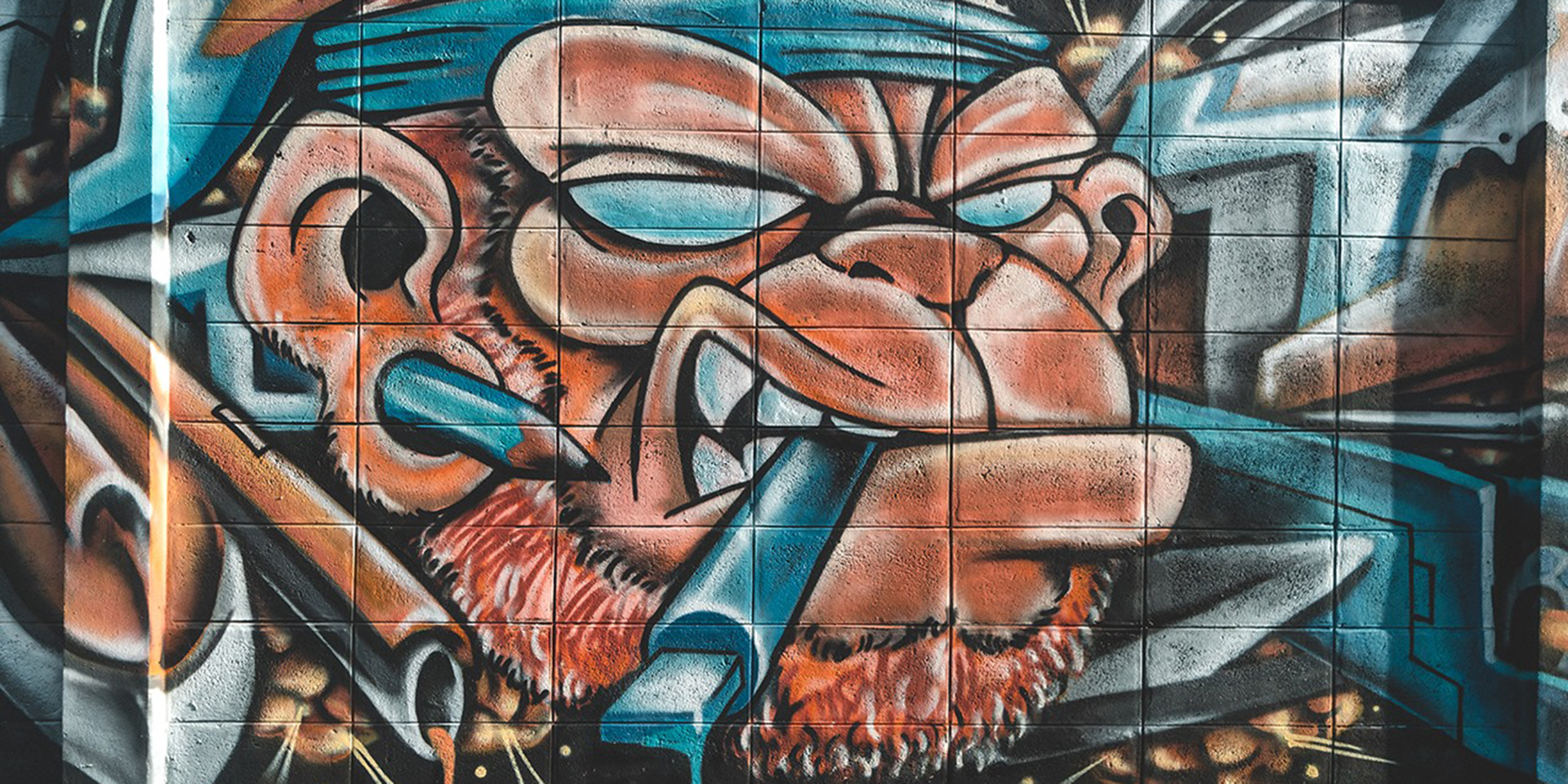 The spread of the coronavirus has led to Thailand, like much of the rest of the world, shutting down. Not one to stay still for too long, with much of Bangkok locked down, I’ve taken every opportunity to take day trips to Thailand’s neighboring provinces. Why not explore the region in solitude while I can?

On a recent trip outside of the Thai capital, I journeyed to Lopburi to visit with the “Monkey Monarchs,” making several stops along the way.

The flexibility to take off has been afforded to me thanks to my trusty companion and steed, a classic BMW e30. I took off just before sunrise for a three and a half hour drive towards Lopburi Province’s Wat Tham Phrathat Khao Prang. 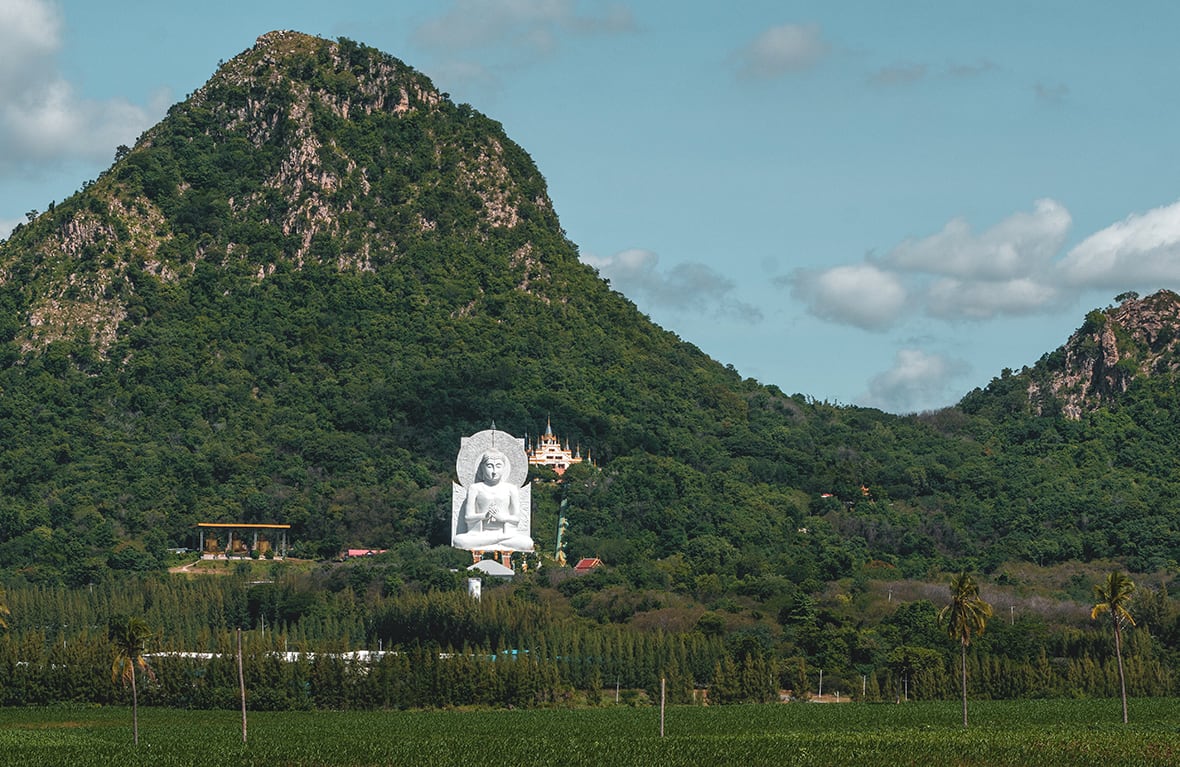 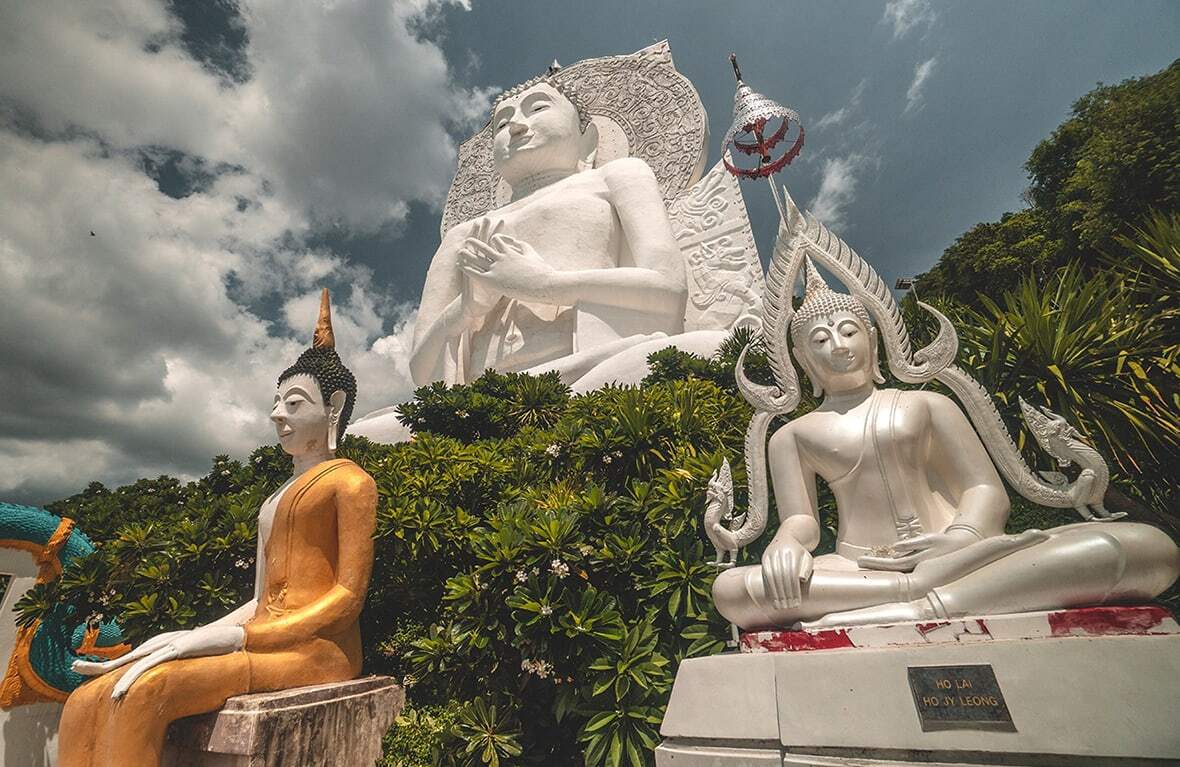 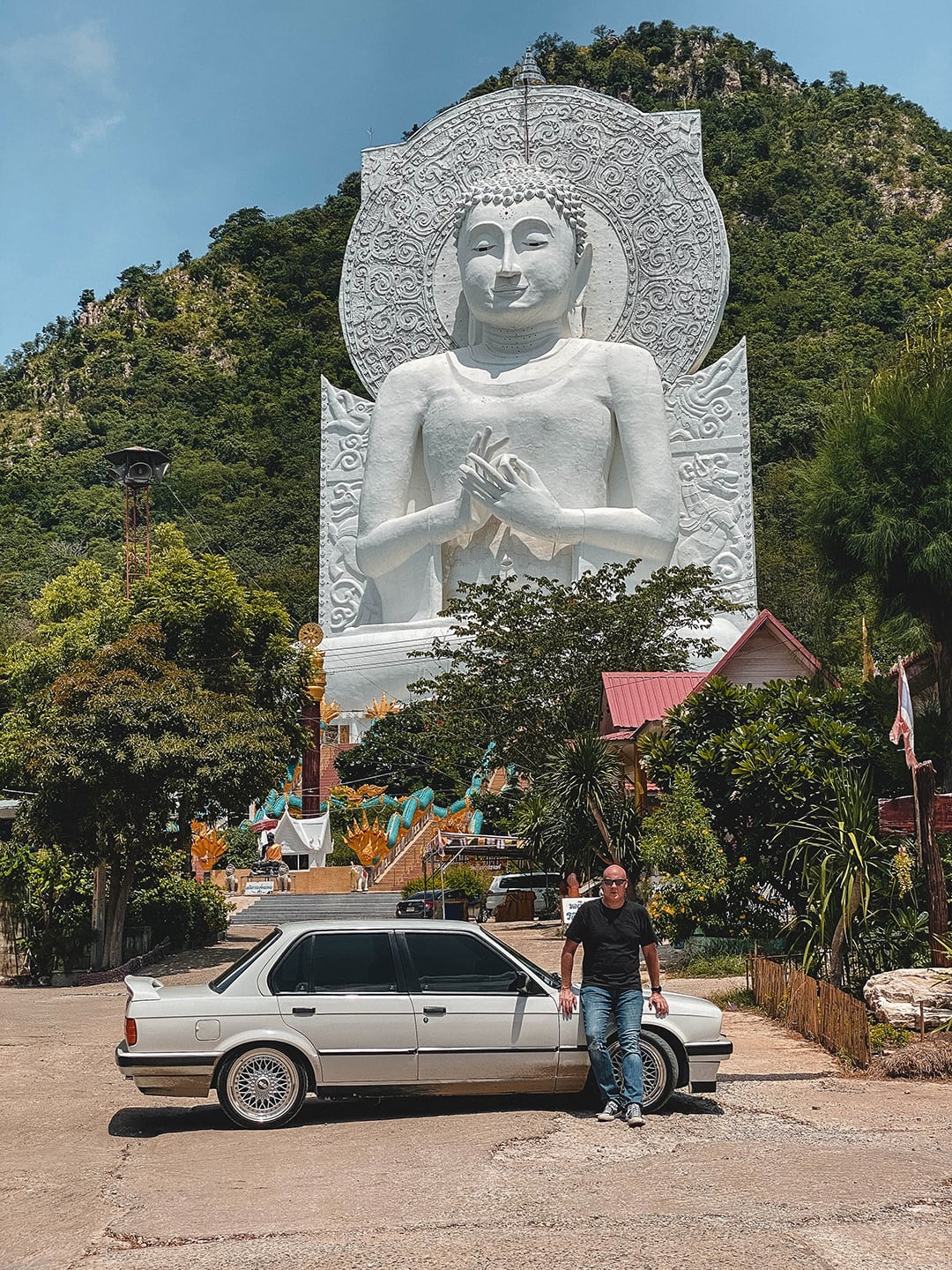 The drive to the far north of Lopburi Province was almost tranquil. With so few cars on Highway 21, the 200 km distance was easy to cover quickly. I knew that I was close when the colossal white Buddha statue at Wat Tham Prathat Khao Prang appeared to my left, nestled in Lopburi’s rolling hills. A truly impressive sight.

I parked the car nearby and started the walk towards the Buddha. When I arrived at the temple, the crowds and foreigners that are a usual sight at the temples scattered across Thailand were nowhere to be seen. Save for a handful of locals paying their respects at the foot of the Buddha, I was alone. 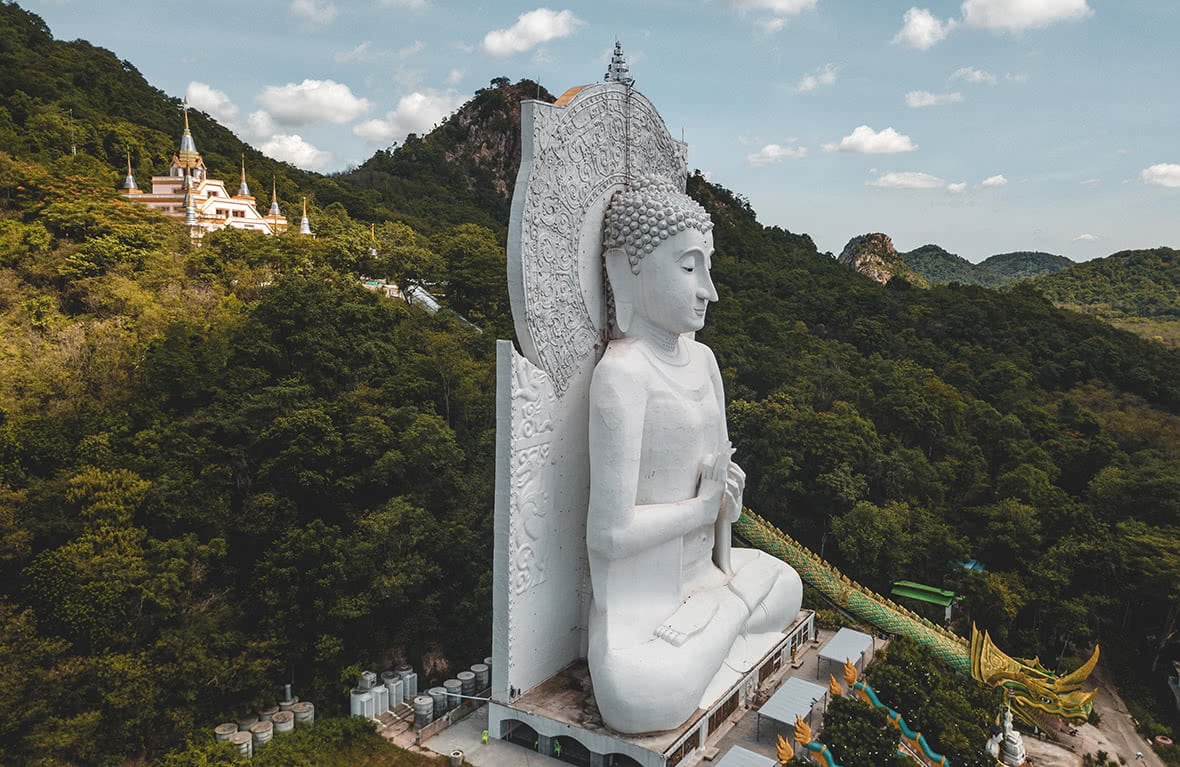 While the white Buddha at Wat Tham Phrathat Khao Prang isn’t close to being the largest in Thailand, it is nonetheless unique. The Buddha’s white color creates a stark contrast with the nearby hills while his hand placement is another point of interest. The gesture, or seal, of each Buddha statue is known as a mudra. There are over one hundred such gestures, some of which use the entire body, but most are concentrated in the hands. Here, the white statue’s hands are placed in the Dharmachakra mudra, which symbolizes the Wheel of Dharma.

The view from the ground was certainly impressive, but to get a unique vantage point, I flew my drone up and around the Buddha for the best possible angles. 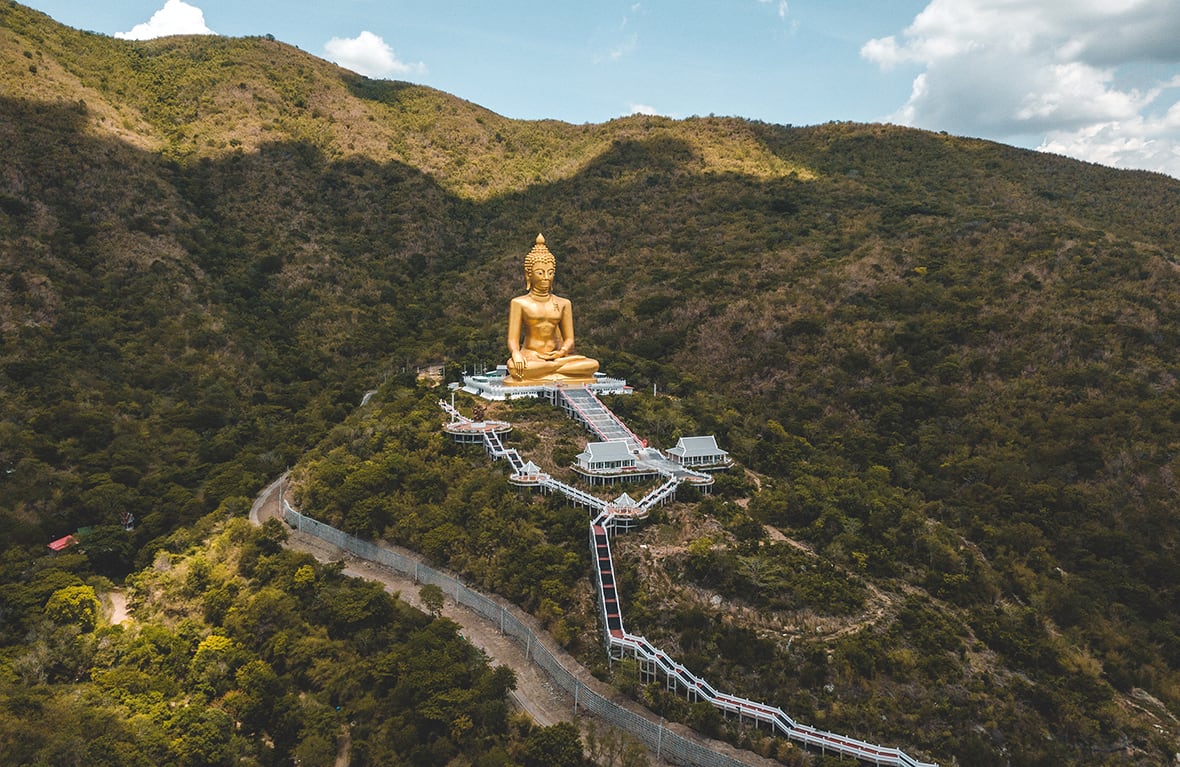 After some time spent at Wat Tham, I got back in the car and drove to visit with another large Buddha statue at Wat Khao Prachan. This time, the Buddha would be gold and sat upon the highest mountain in Lopburi Province. The drive towards Wat Khao Prachan was a relatively quick ninety minutes along a mostly deserted highway. I could see the massive seated Buddha’s golden color from afar; its true scale is actually better appreciated from a distance where it’s size can be seen within the context of the surrounding landscape.

Though the statue is still a work in progress, I took the time to fly the drone around rather than making the steep climb to the top. 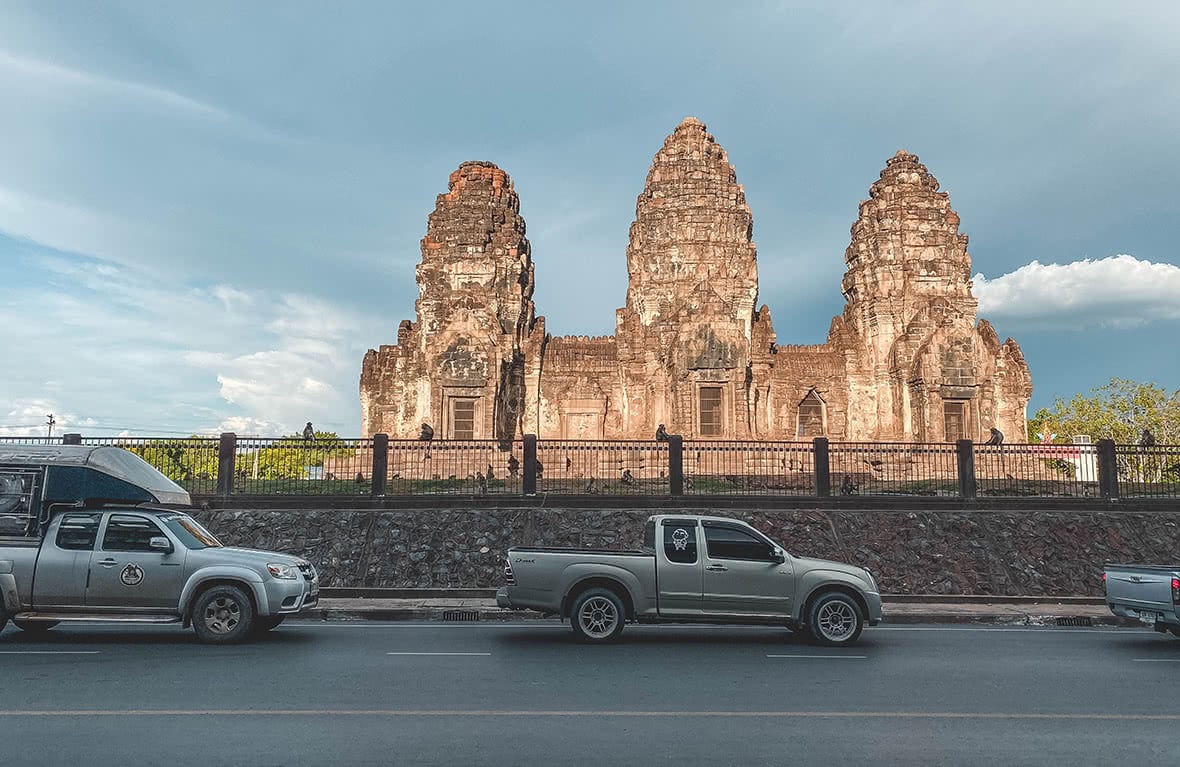 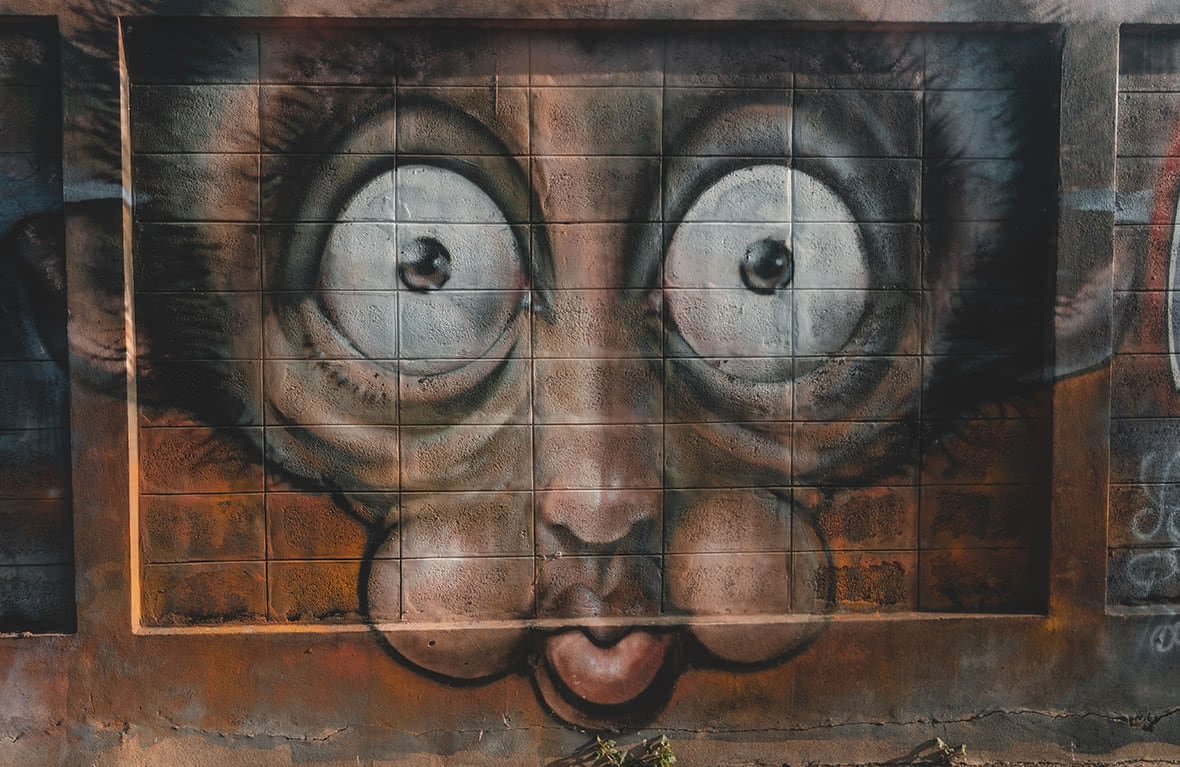 There was one more stop to make, and this one would take me into the next day. I hadn’t been to Lopburi City in nearly ten years and spent very little time there when I was there last. Since I was in Lopburi Province, how could I avoid an overnight stay in the famous city?

My hotel was located in the new town for the modern accommodations, but the old town was what really drew me there. The capital city has a history spanning nearly one thousand years. Like much of the region, it was formerly part of the Khmer Empire stretching across the majority of modern Vietnam, Cambodia, Laos, and Thailand. Evidence of the empire can still be seen in one of the main landmarks in Lopburi, Phra Prang Sam Yot, a 13th-century temple built by the Khmer King Jayavarman VII.

You would think that the popular tourist site would draw in visitors due to its unique history as a Buddhist and Hindu temple (it was briefly a temple to Shiva following King Jayavarman’s death), but it’s actually the colony of macaque monkeys that roam the temples that are the real reason. 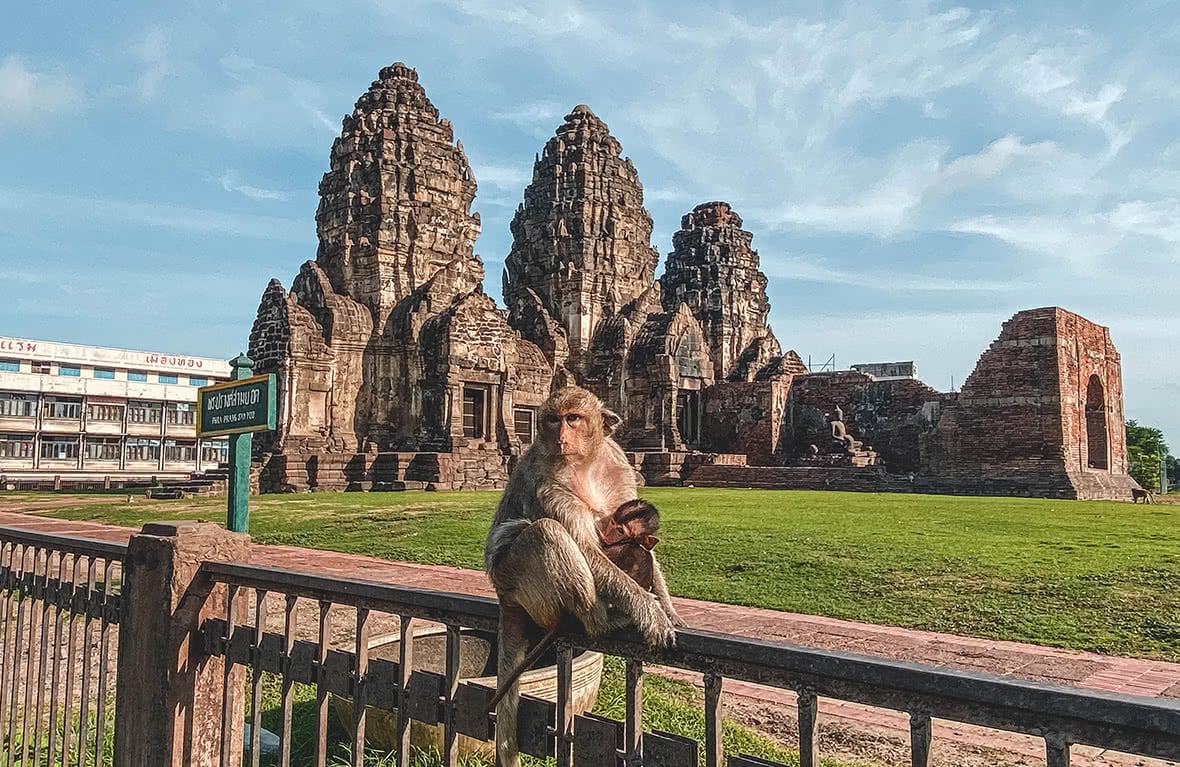 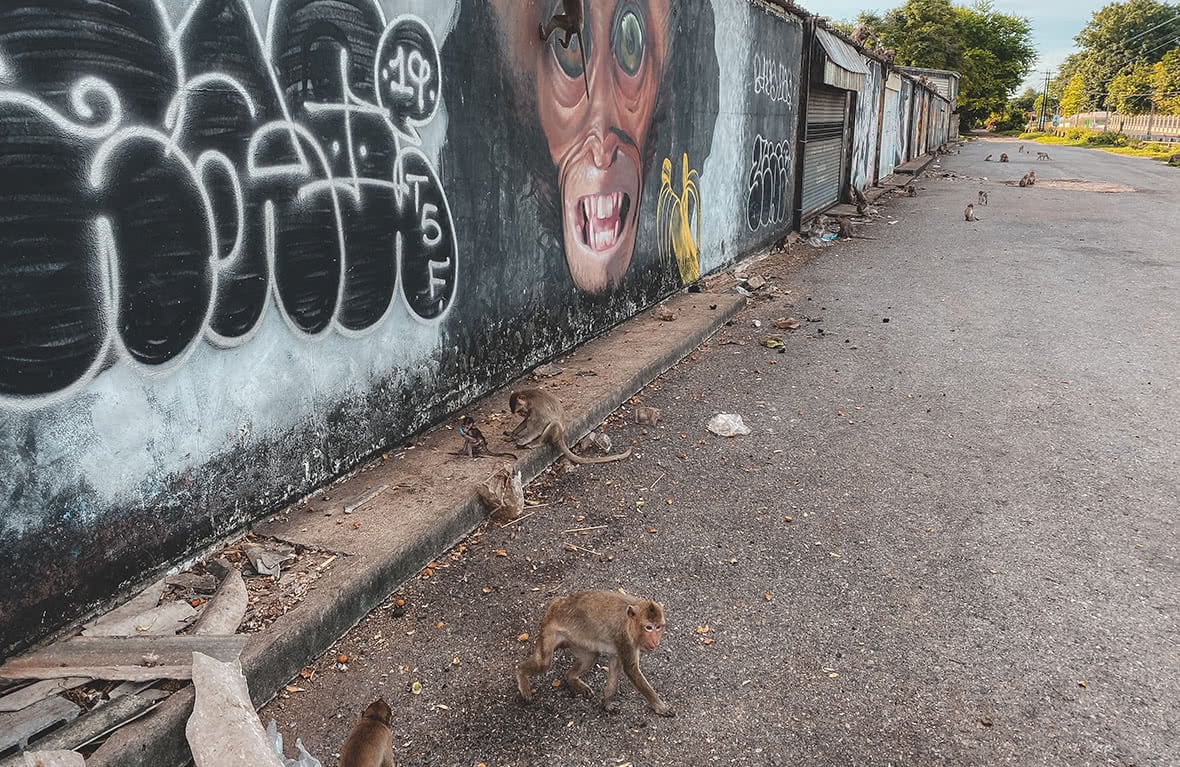 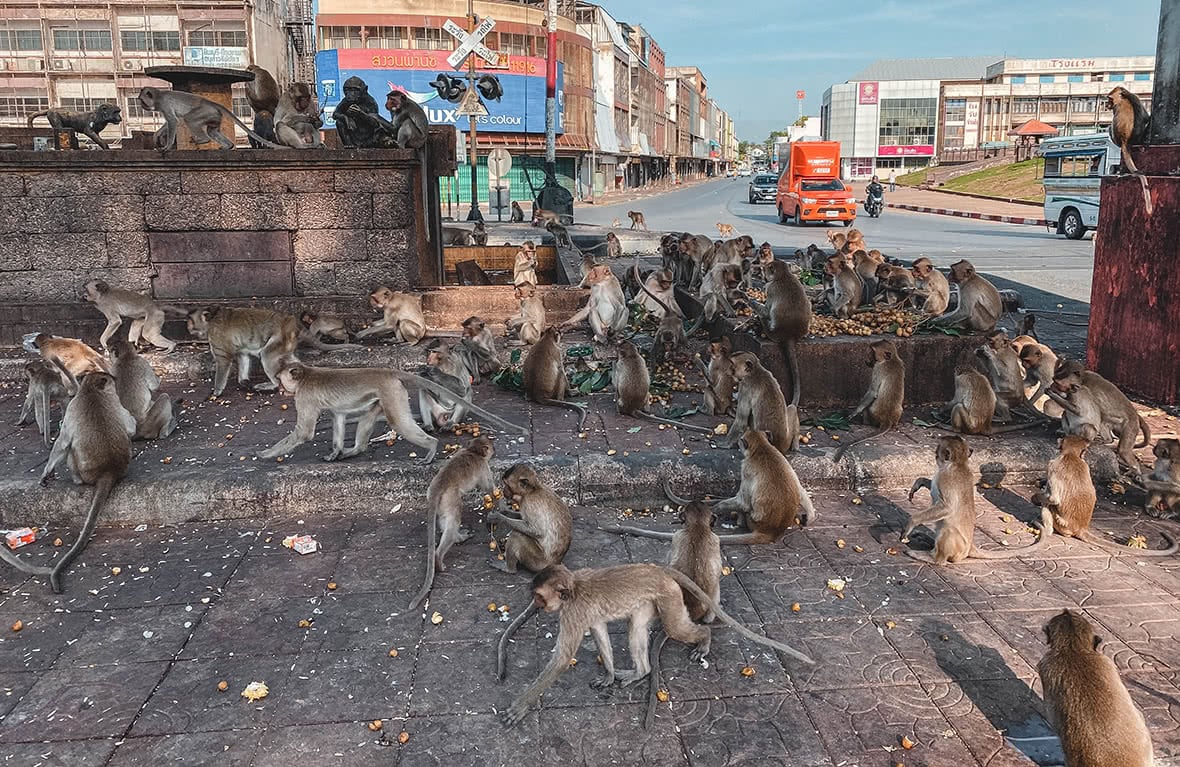 The large population of macaques control the temple and, until recently, would stay on its grounds. However, since the coronavirus stopped the flood of tourists who used to feed them from visiting the city, they have become much more aggressive; venturing further into the city and hassling the locals.

I filmed them that entire afternoon and watched as they roamed the area like street gangs. They certainly made it known that the town was now theirs! Most were curious of their own reflections in my camera lens, while others were much more interested in trying to flank me and steal whatever they could, edible or not. Several times I had to fend off macaques that jumped on my back!

Having seen my fair share of monkeys in the twelve years that Thailand has been my home, their behavior didn’t faze me too much, though they were definitely much more aggressive than usual. 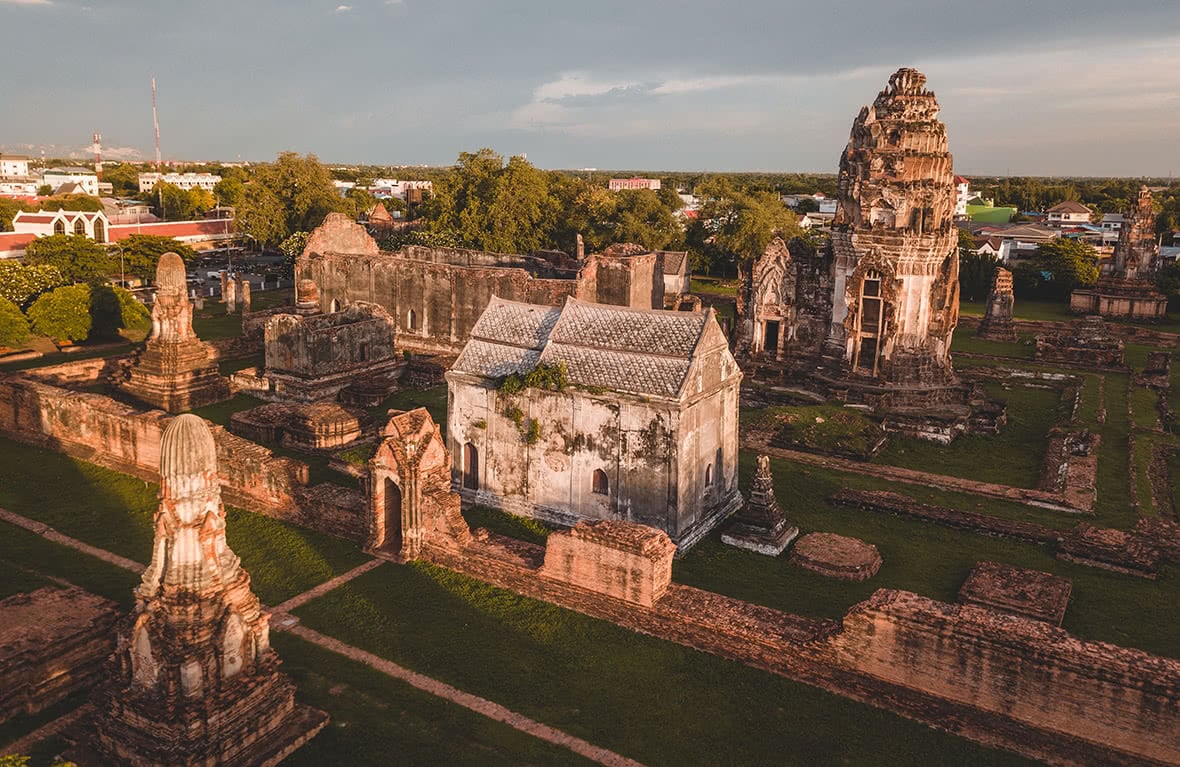 With the monkeying around out of the way, I headed over to the royal temple of Wat Phra Sri Rattana Mahathat, which was surprisingly nice. It reminded me of some ruins I had seen in Ayutthaya, but unlike previous temple visits, there were no other tourists here at all.

It was really nice having the place to myself. Tso Moriri: Lake in The Clouds 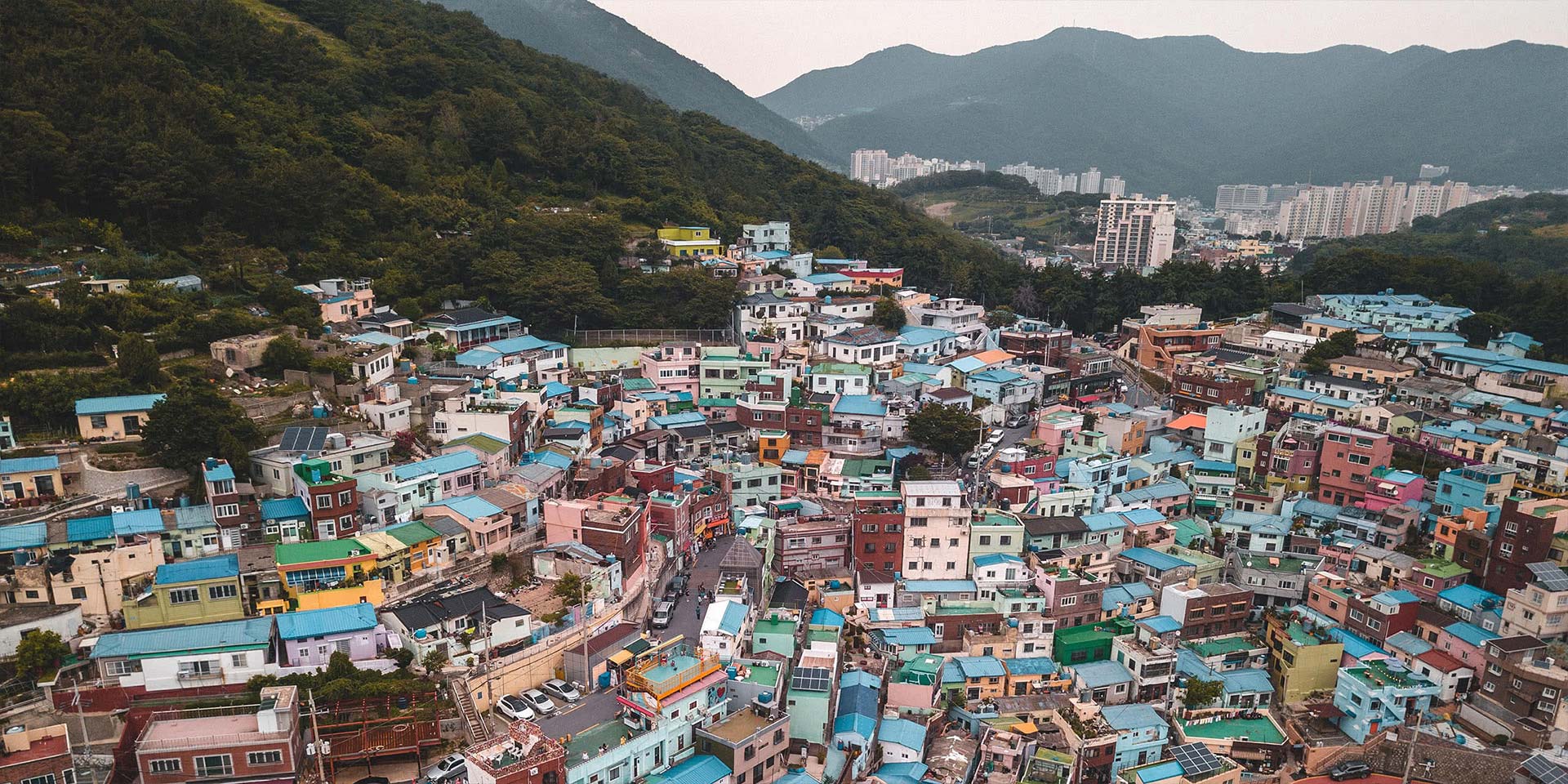 Drone to Busan: Korea’s Coastal Metropolis from Above