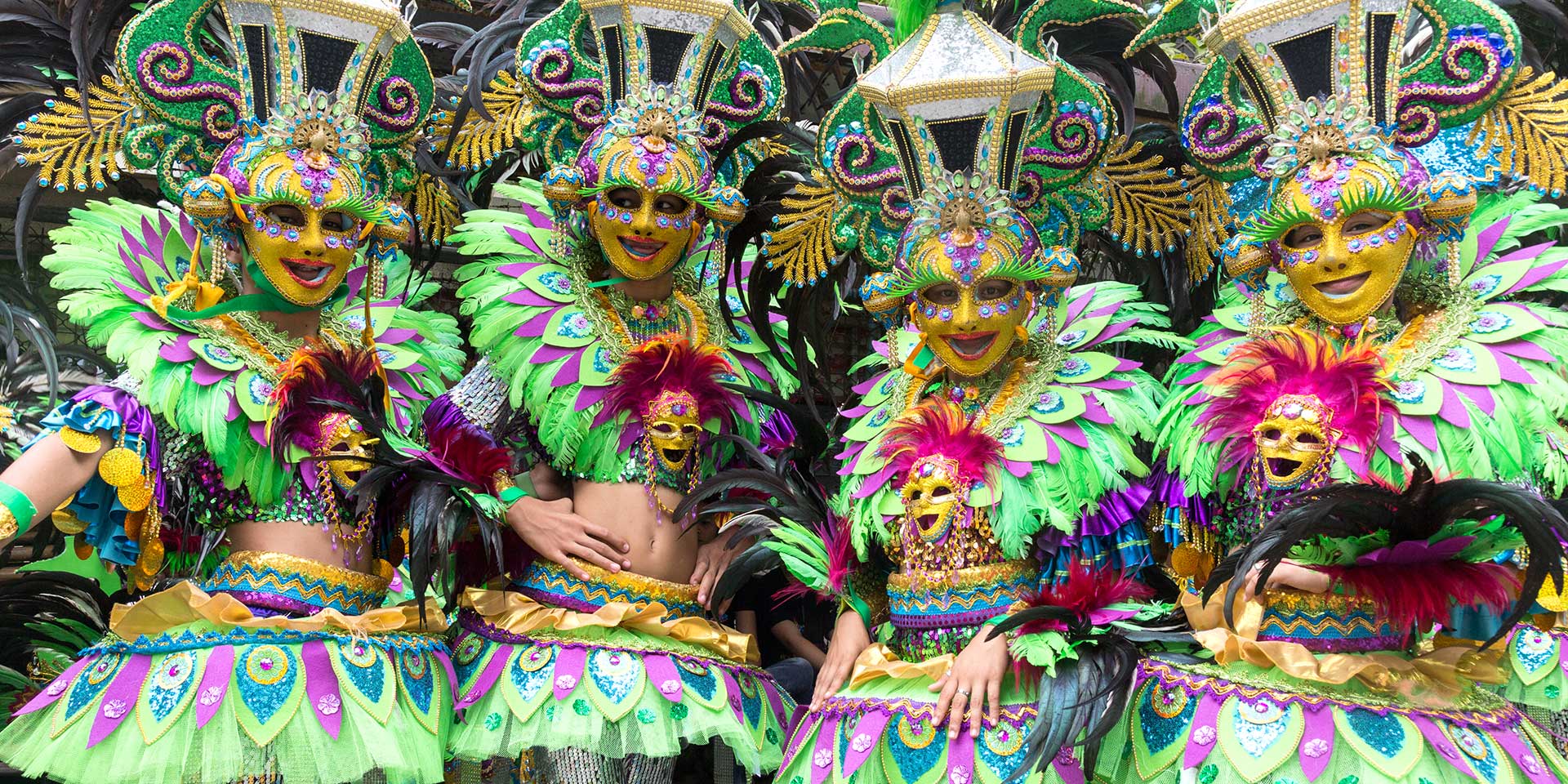 I’ve known for some time that people in the Philippines know how to throw colorful festivals, but it wasn’t until I recently ventured to Bacolod in Negros Occidental to experience one for myself that I truly understood the spirit of a Filipino party. Perhaps the moment when I found myself wandering the streets in the middle of a typhoon, with little idea of where to find the main event yet content to get soaked in the rain in order to capture a steel band on my camera, was when it hit me: beautiful things can come out of adversity. 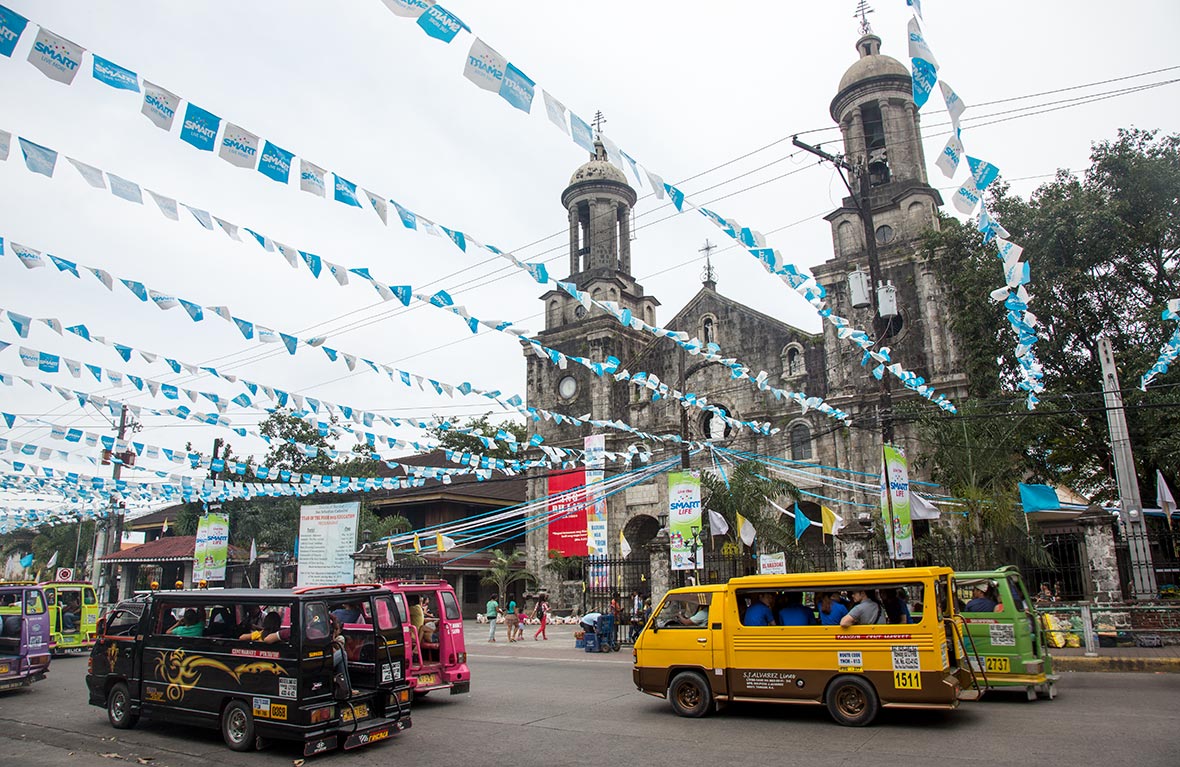 Elaborate ‘fiestas’ occur in every city and town in the Philippines throughout the year, many originating from Spanish colonial times when big religious festivals were thrown to lure people to Christianity. Masskara festival in Bacolod, though, which is held during the third week of October, started as recently as 1980. I had traveled to the Philippines many times in the past — more than I can count — but this was my first visit to Bacolod, a city of half a million in the Visayas region, historically known for its abundance of sugarcane.The 80s marked a period of deep crisis in the province, when two disasters struck at once: the sugar industry collapsed, and 700 people died in a ferry disaster.

Known as the ‘City of Smiles’, the famously friendly inhabitants of Bacolod took it upon themselves to create something they could smile about and came up with a festival to lift themselves out of despair. The name “Masskara” comes from “mas”, Spanish for many, and “cara”, the word for face; the festival is a noisy, busy, joyful, colorful mix of parading street dancers and musicians, all wearing bright masks — thus the many faces. Masskara is a declaration by the Bacolodons that no matter how bad things looked, they knew that would weather the storm and pull through to brighter times. 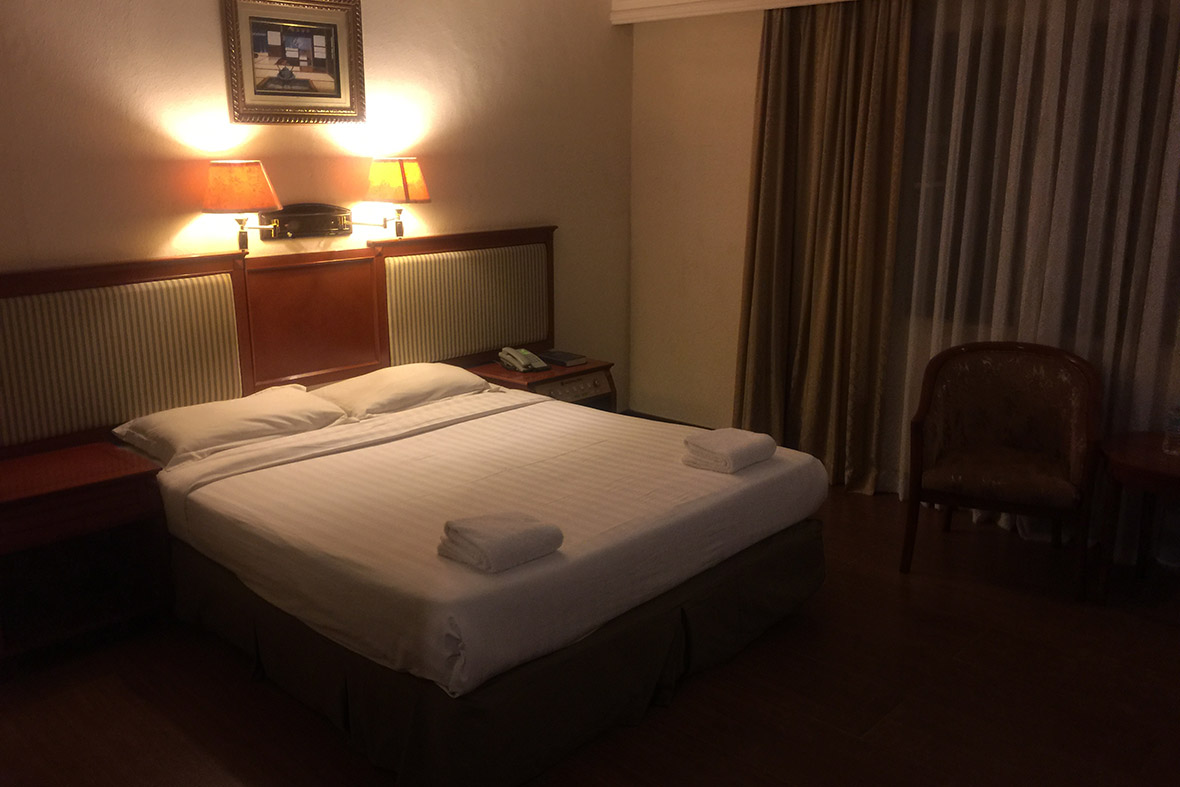 It was this attitude I needed to assimilate to when, shortly after arriving in town, I realized the importance of making a hotel reservation for the festival early. The best hotel in town is the L’Fisher Hotel, which had predictably already sold out when I booked my trip less than a month prior. I ended up at the Grand Regal, which was a less than spectacular substitute. It was old and service was poor, but I concede that it had all the necessities. By the time I’d checked in, it was already 8pm so I headed into the town to try to find some food. Not knowing the lay of the land, I found the city a bit intimidating in the dark, but, in the spirit of Masskara, I was met by smiles everywhere and it wasn’t long before I found a good place to eat on Lacson Street, one of the main walking streets for the festival. It was clear right away that this was an authentic, local festival and there wouldn’t be a ton of westerners around. 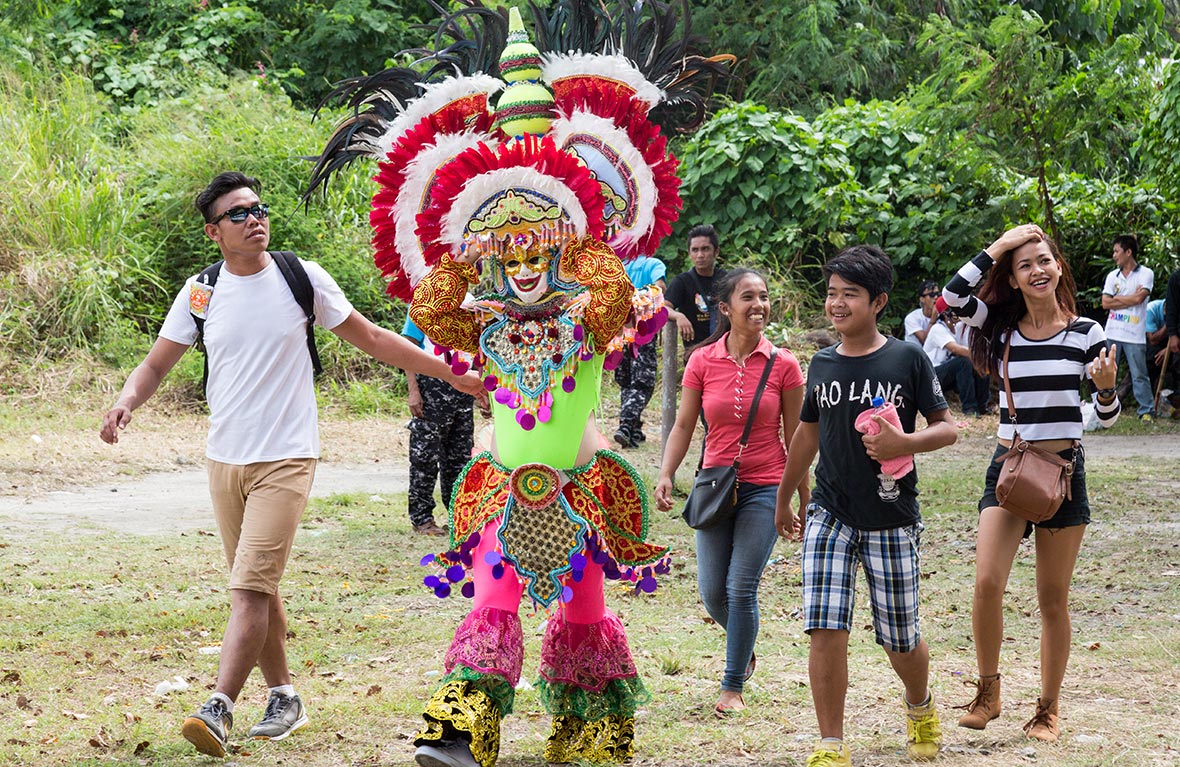 The next morning I was ready to head out and see the action. The printed schedule of the event was vague at best and when I asked some people in the hotel where I should go, they weren’t much clearer, so off I went in a taxi to the public plaza to try to figure it out for myself. At 10 a.m. I was early, and there was little going on apart from vendors setting up. I noticed the Spanish-era San Sebastian Cathedral nearby, an iconic landmark in the city, and had a quick look.

GO BEHIND THE SCENES 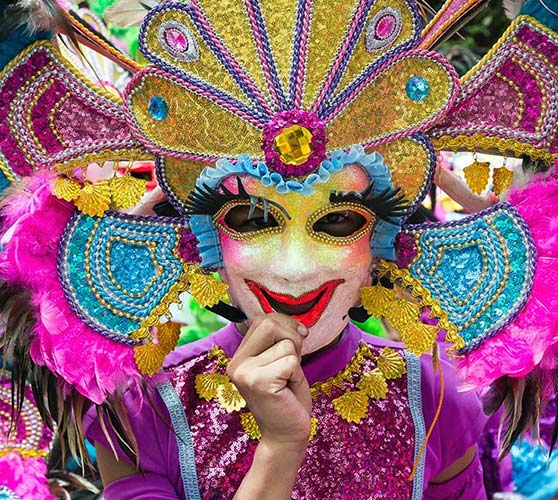 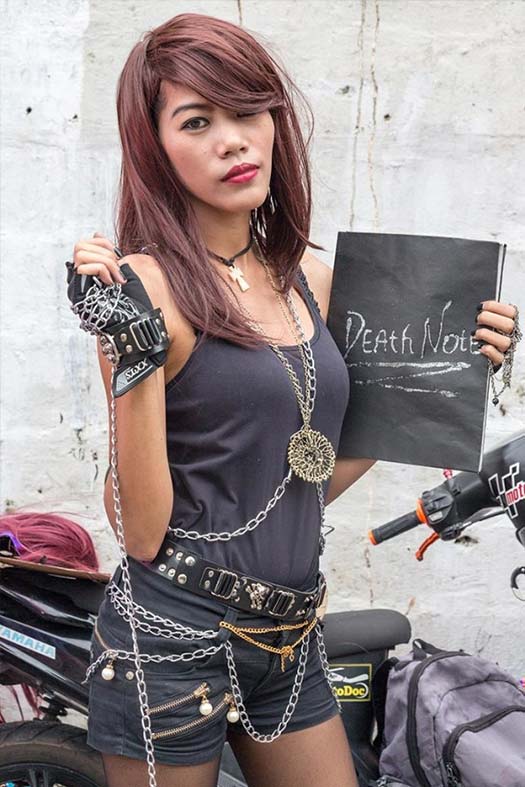 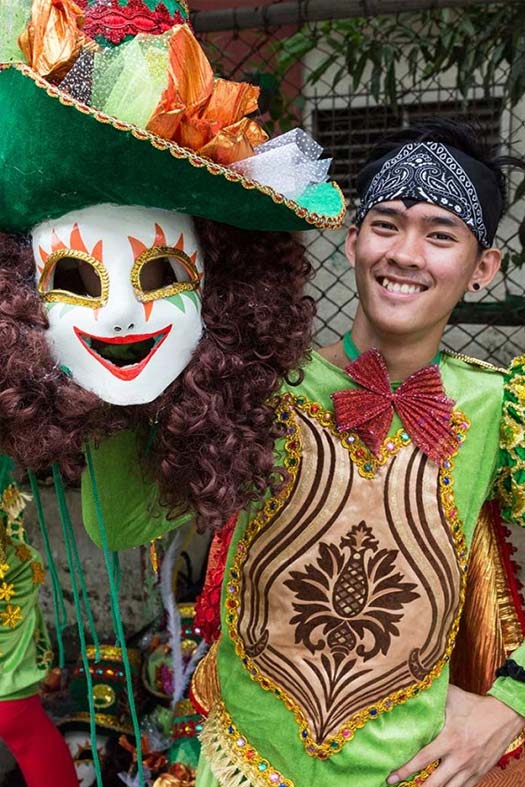 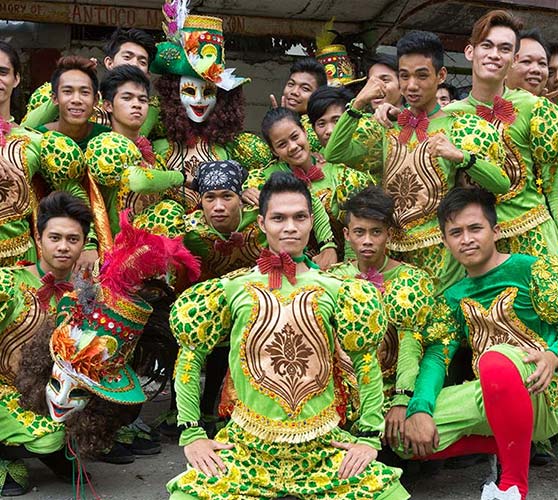 Fortunately, I met a couple of photographers who were more clued up, and they pointed me towards the Panaad Stadium, a short taxi ride away where the arena competition was to be held. There, though I was still early, I found various troupes from local barangays getting dressed up and practising, which was just what I was looking for. It was a lot of fun chatting with the performers and joking around with them while I shot photos and video. I was the only foreigner in sight and they seemed to get a genuine kick out of me being there; true to form, they couldn’t have been more friendly. 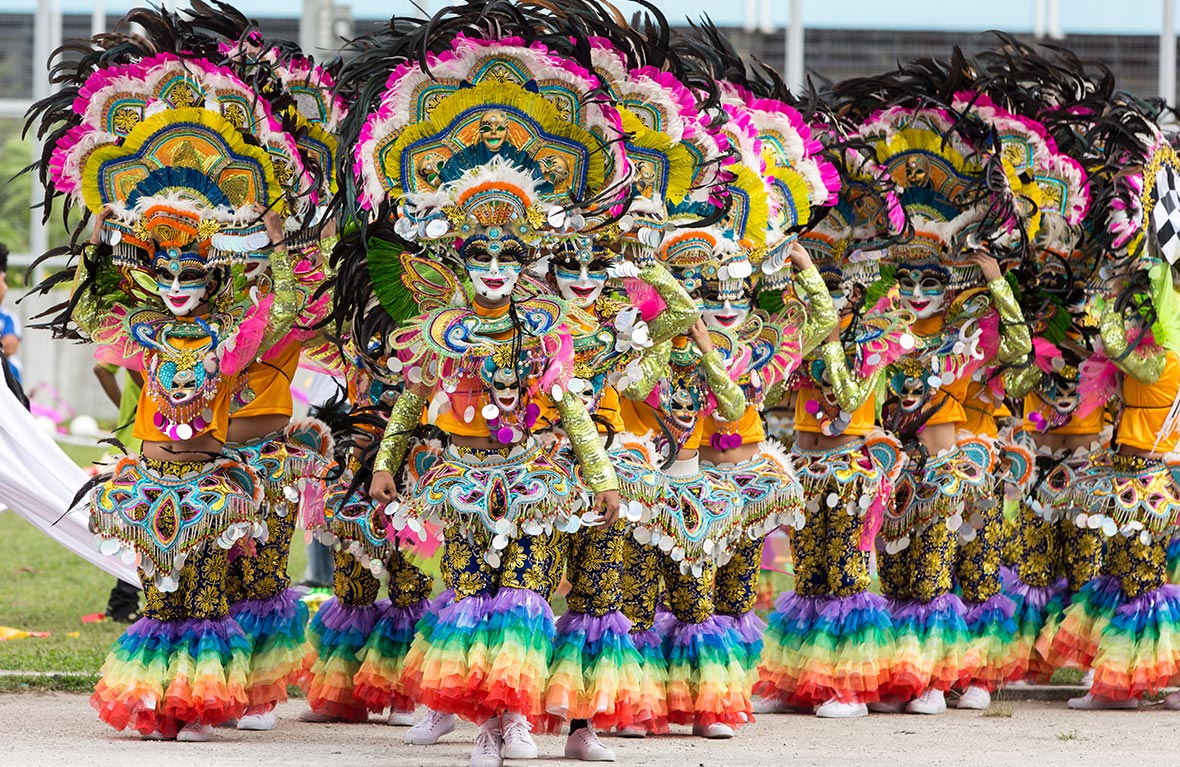 With my press pass in hand, I headed through the back of the stadium and took my position as the first troupe came in, dressed in spectacularly-colored costumes. It was from my vantage point here that I would spend the next couple hours, watching a steady stream of performances from each of the participating barangays. It was exciting watching the performances up close, and a challenge to photograph as well, given the speed of the performers on the stage. 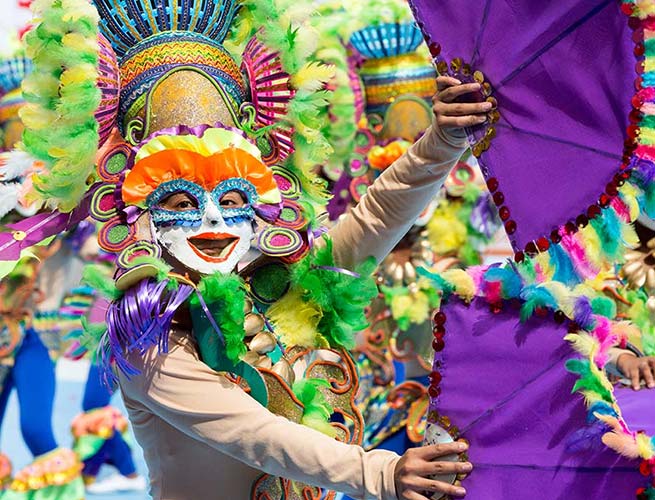 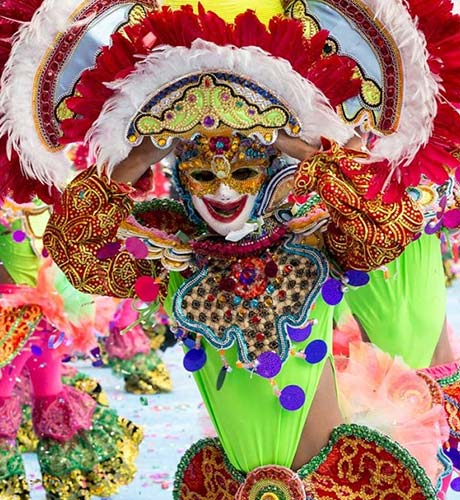 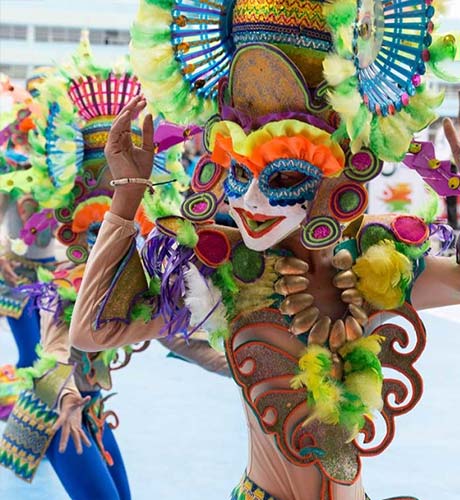 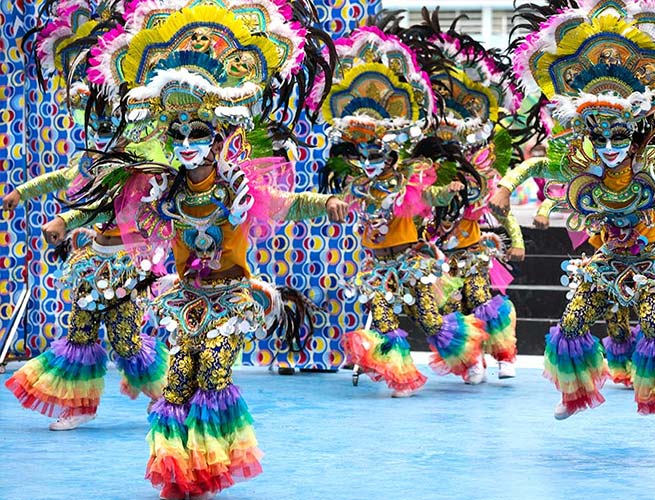 GET CLOSE…BUT NOT TOO CLOSE! 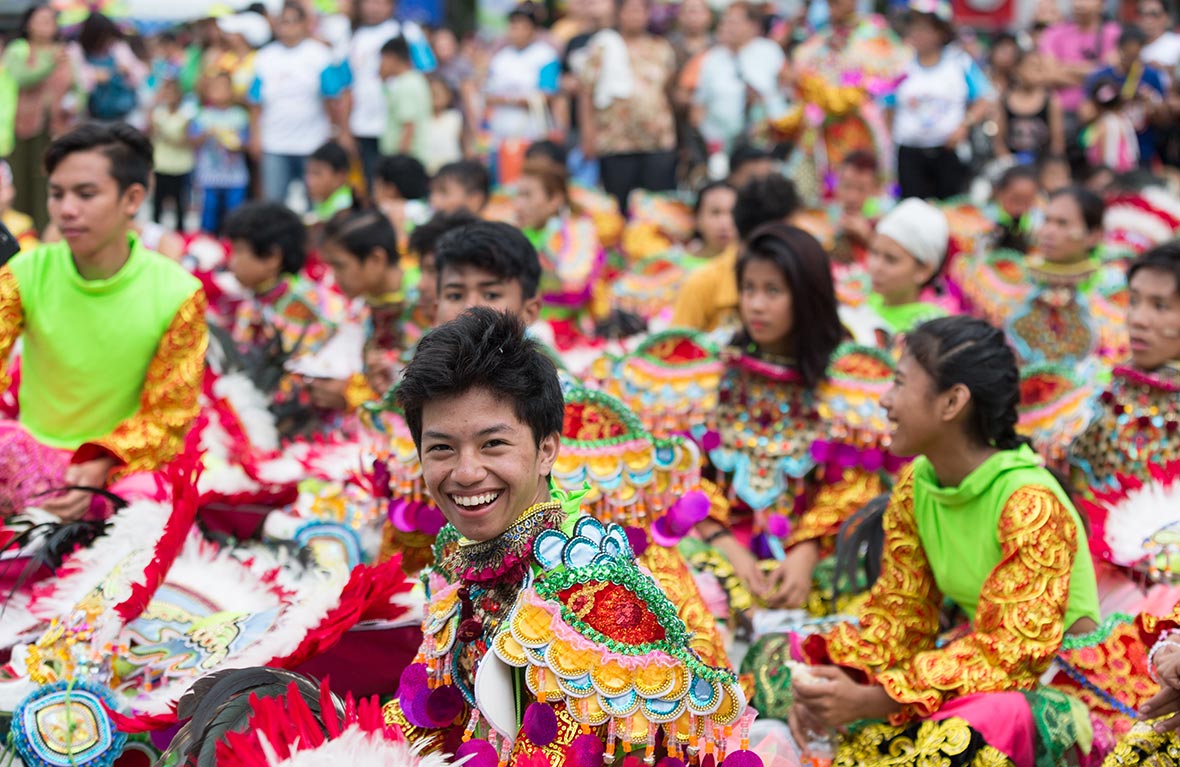 From the stadium, I headed back to the plaza, where by now a large crowd had assembled and with it a real carnival atmosphere. Masskara feels like a mashup of Mardi Gras with Carnival in Rio and Venice, but at the same time it is distinctly Filipino, which somehow makes it completely authentic. What I hadn’t realized was that after performing in the arena, each troupe had danced through the streets in a giant parade all the way to the plaza. By the time I made it there I’d missed it; however, it was here the top performers from each group were brought out to perform head to head. It was good fun being around so many happy locals, and I only saw one other westerner there besides myself. That didn’t go unnoticed by the announcers either, who insisted on introducing me on the mic. After an hour or so the performances started and, perched on the stage, I was even more up-close-and-personal than in the stadium. I even had my camera knocked to the ground by one of the performers, so you could even say it was a bit too close for comfort! 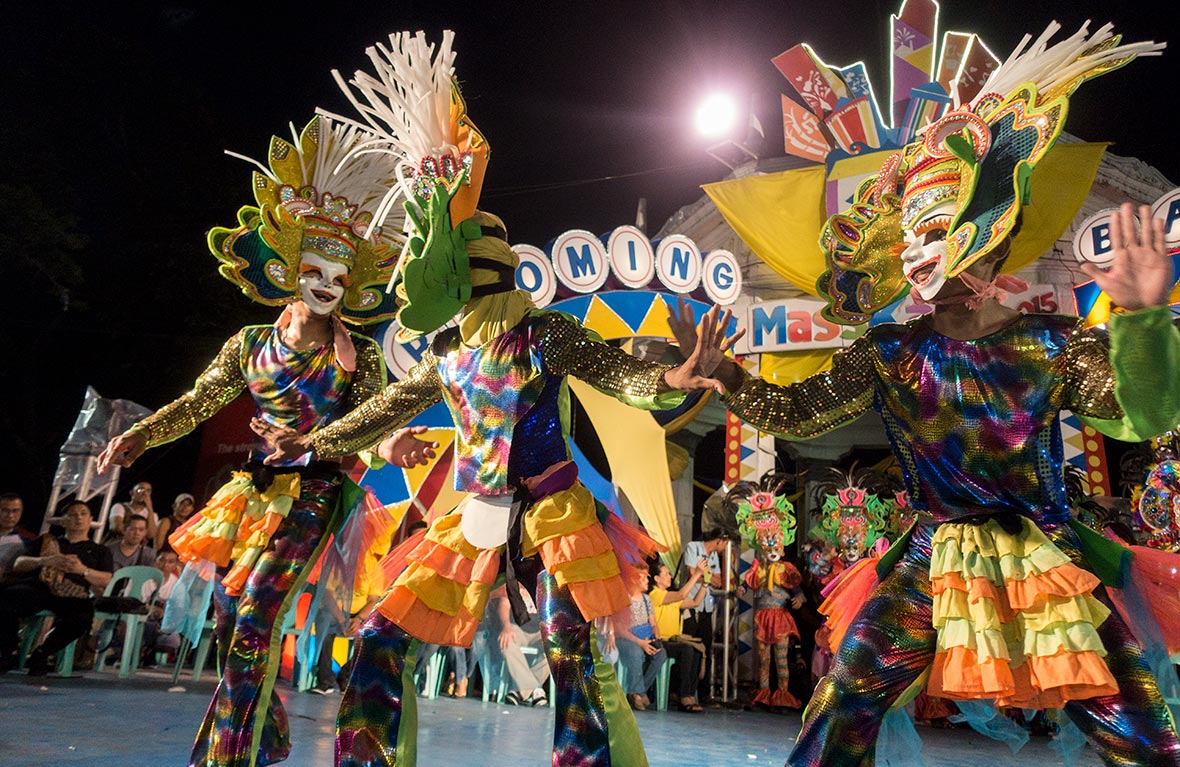 The next event was the “Electric Masskara”, where dancers parade around town on colorful electric floats. Since I had been standing for the past nine hours without a break, I decided to head back to the hotel with a plan to catch it the following evening. My only real complaint about the festival is that it was difficult to figure out exactly where to go and when to see the various events, and so I actually missed several highlights. Most people I asked didn’t seem to know either, although they were, of course, extremely friendly. 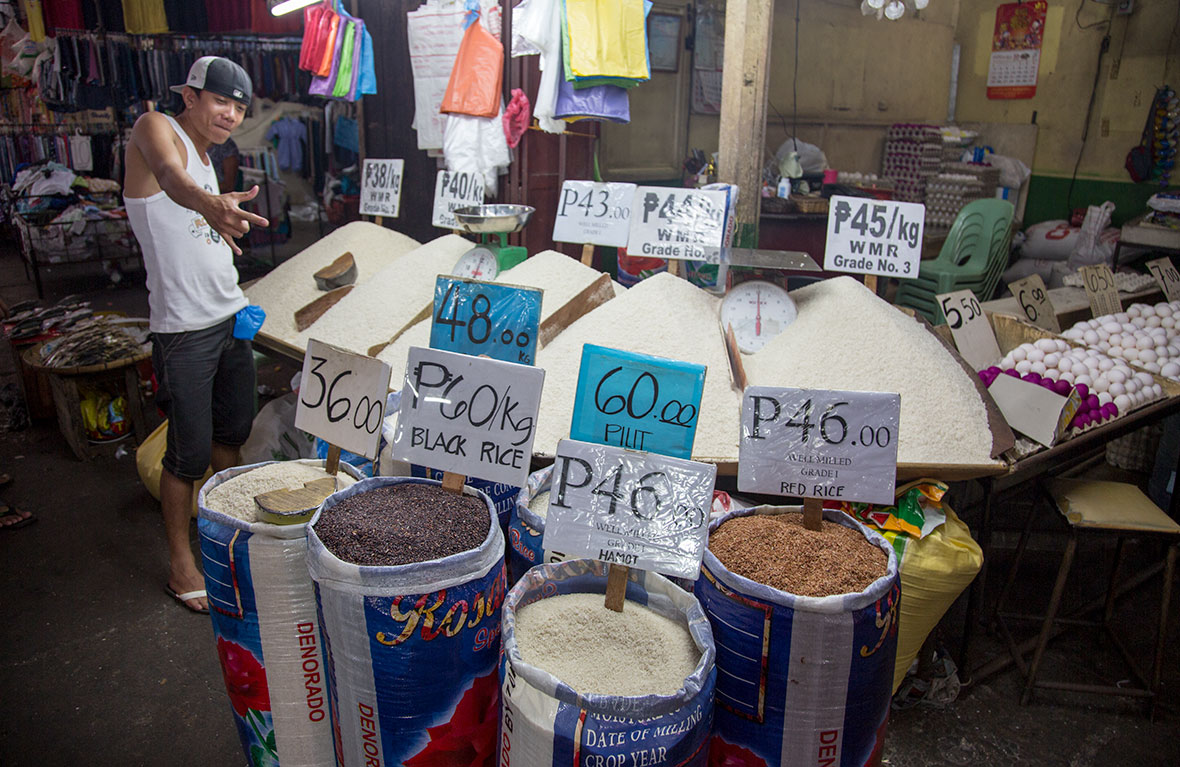 On Sunday, my last day in Bacolod, there were only events scheduled for the evening, which just so happened to coincide with a major typhoon that was blowing into the north of the country to dump heavy rain on Bacolod. Fortunately, there were a few hours of sunshine beforehand and I had a chance to do some walking around the markets to get a better feel for the place. 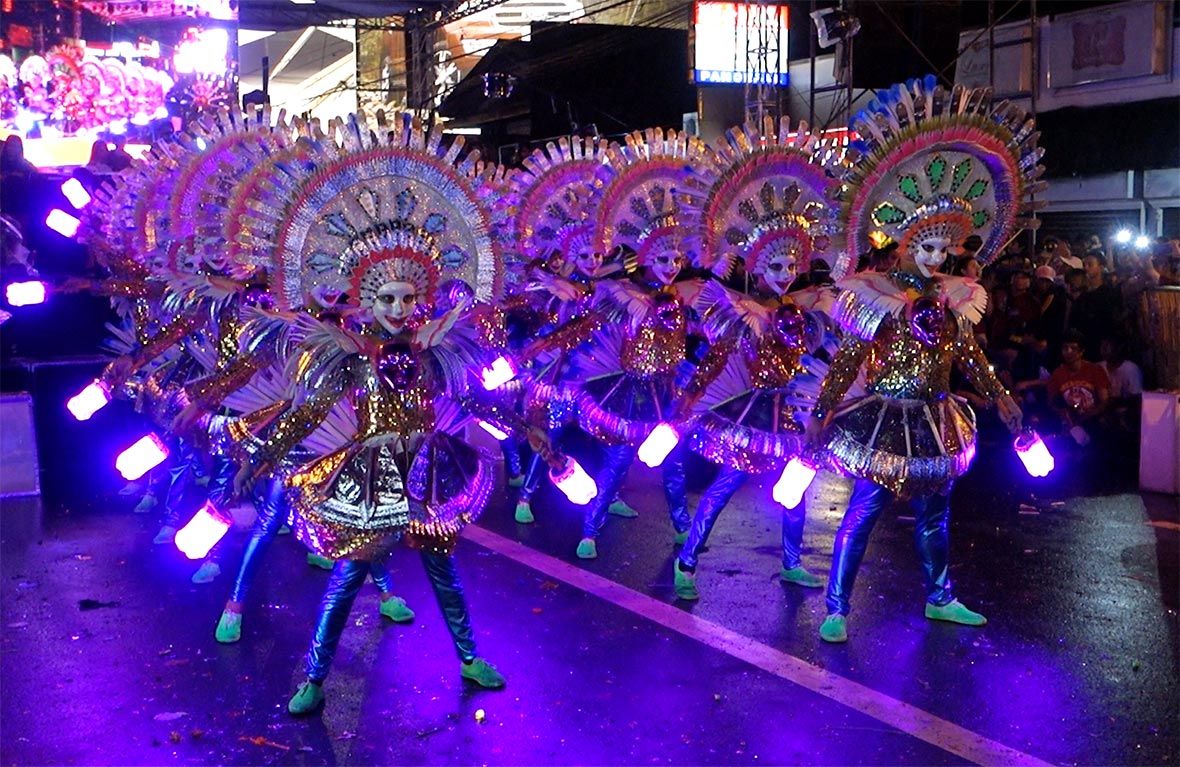 In the evening, I went out in search of the Electric Masskara, but by then it was raining quite heavily. The streets were crowded, though, with food stalls and makeshift bars set up all along the road. Though once again no one really seemed to know what was going on, the locals seemed content to be eating, drinking and watching the musicians. It was here I found the steel drummers, and a little further down the street, I stumbled into the main event for the night — the Electric Masskara Elimination. I fought through the crowds and managed to get a prime spot in front of the performers, dressed in their electric costumes. Once again, the top troupes battled it out one by one until the winners were announced. Caught up in the festivities, I ended up hanging around Lacson until around 1 a.m. before heading back to the hotel to call it a night. 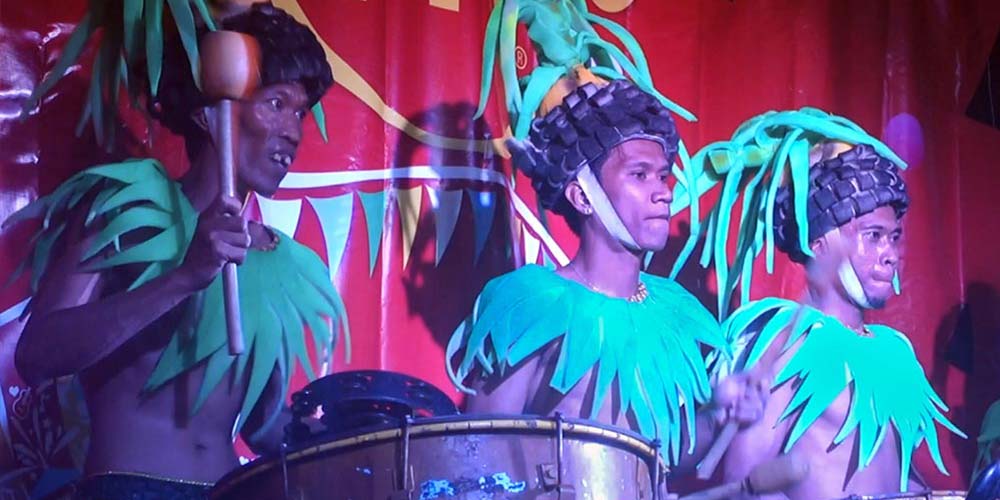 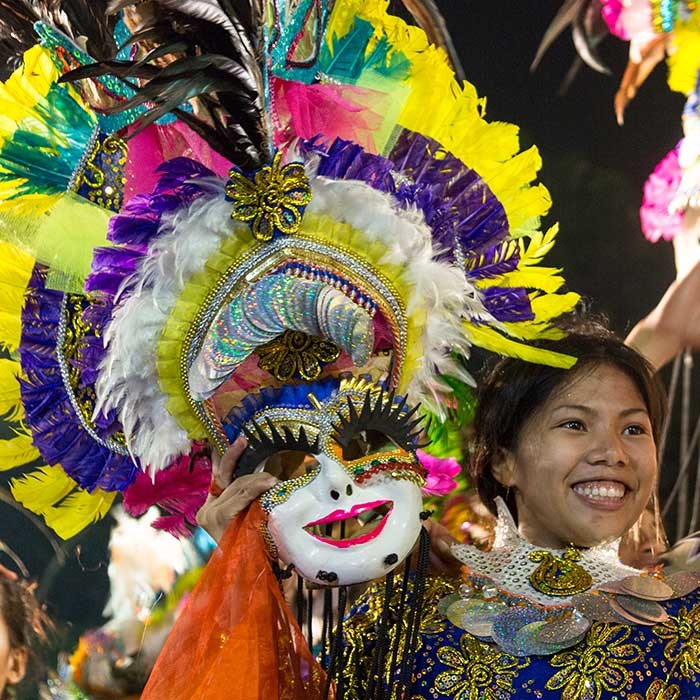 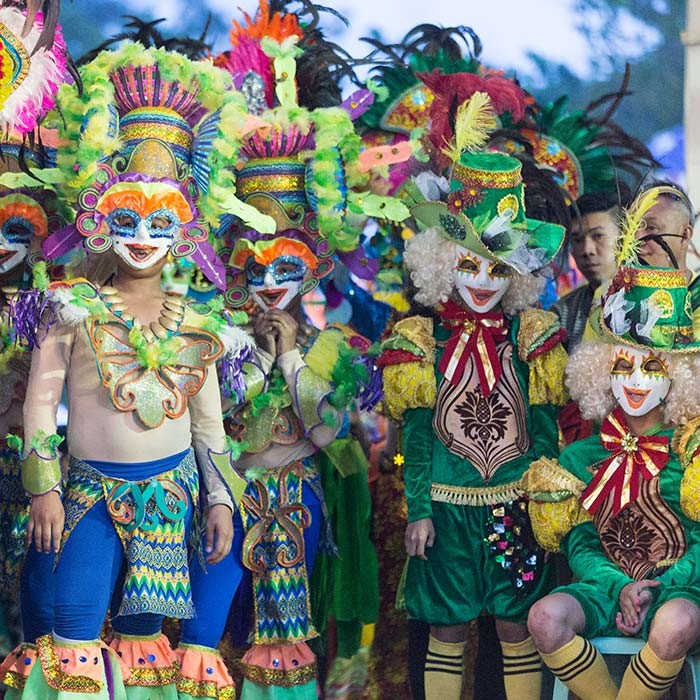 The next afternoon, I set off for my one-hour flight to Manila, which ended up being delayed six hours thanks to the typhoon. I hoped, like the citizens of Bacolod, for a brighter future! 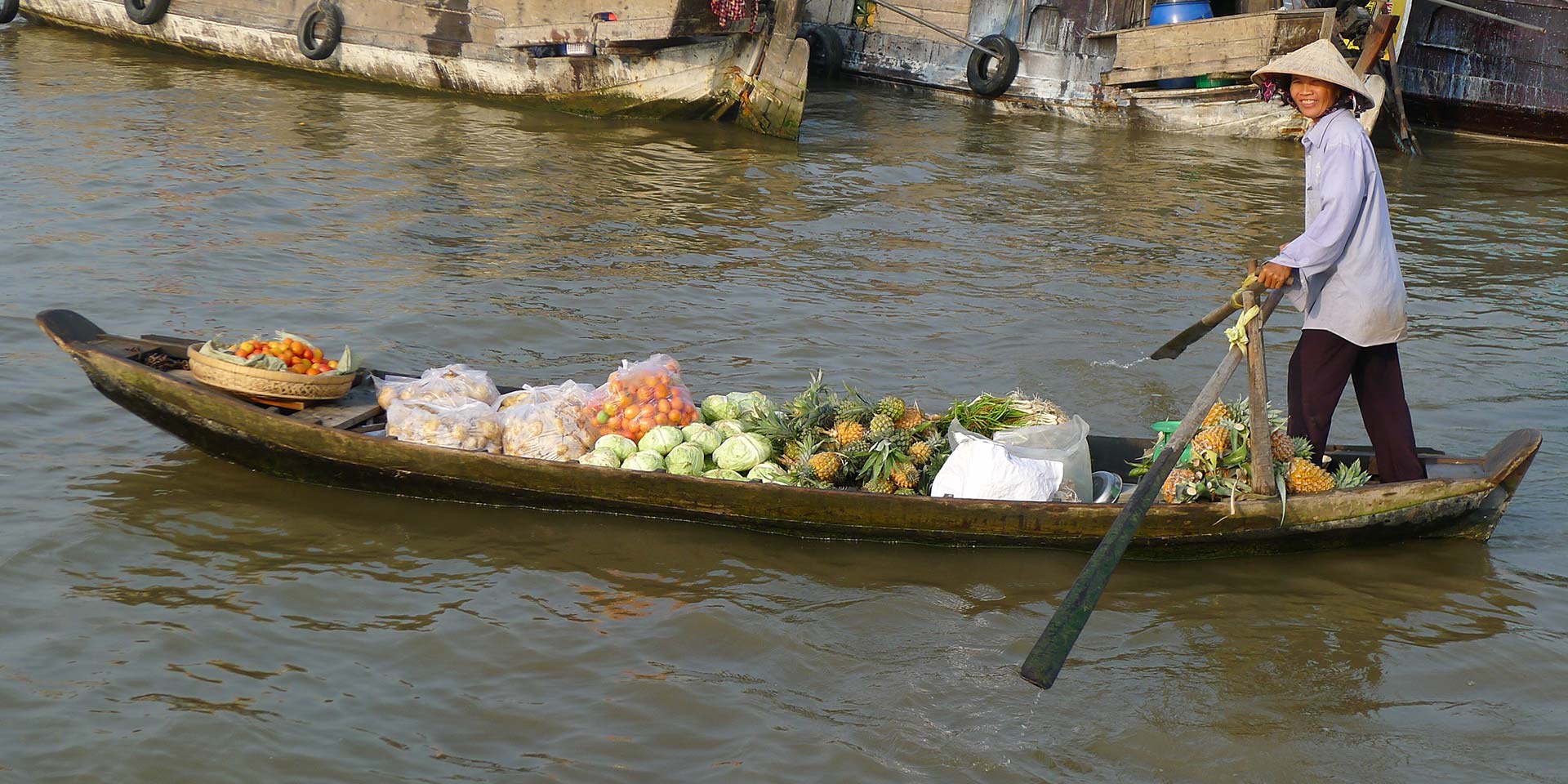 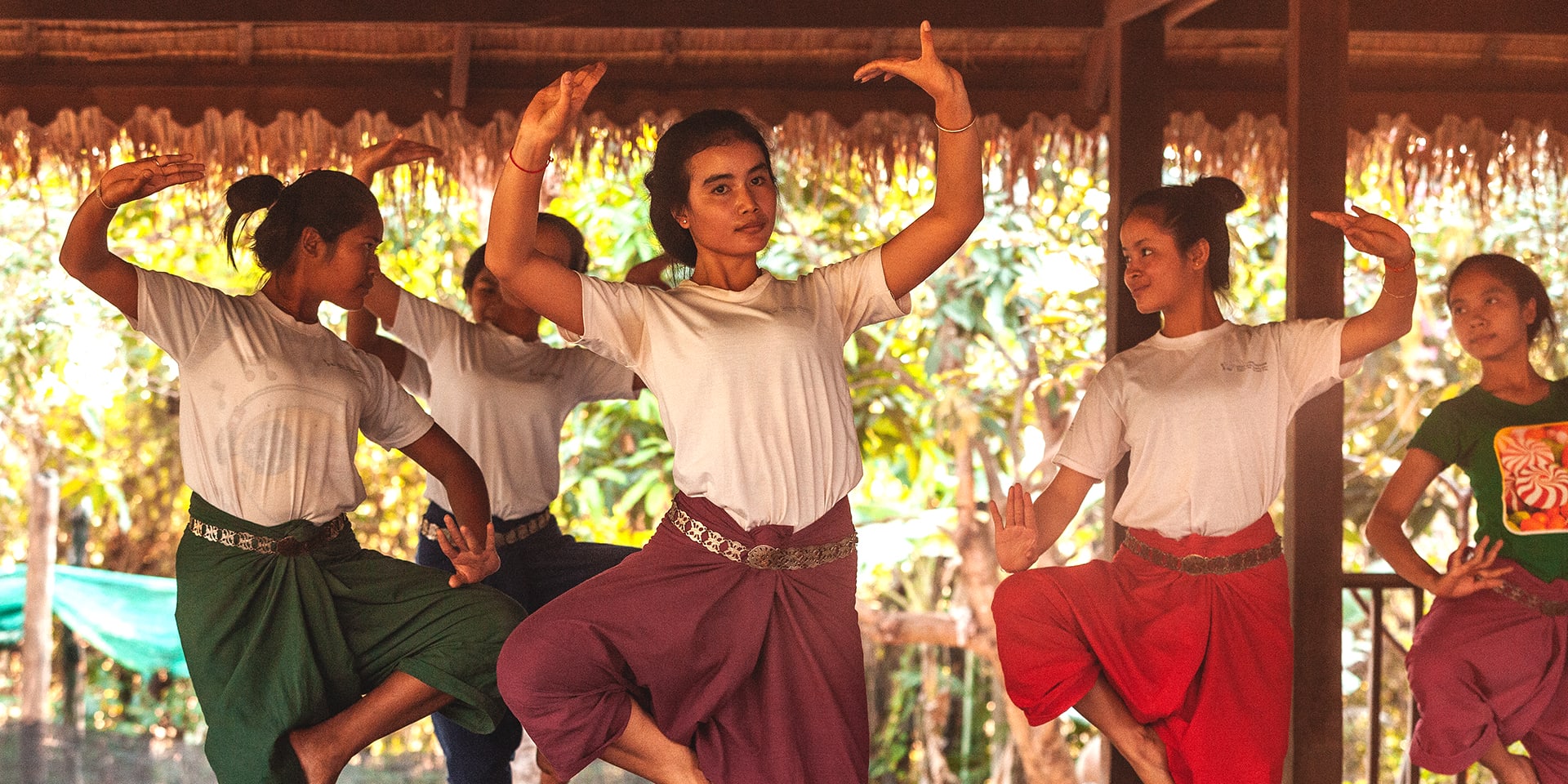