2,700 Years of History: A Journey to Samarkand 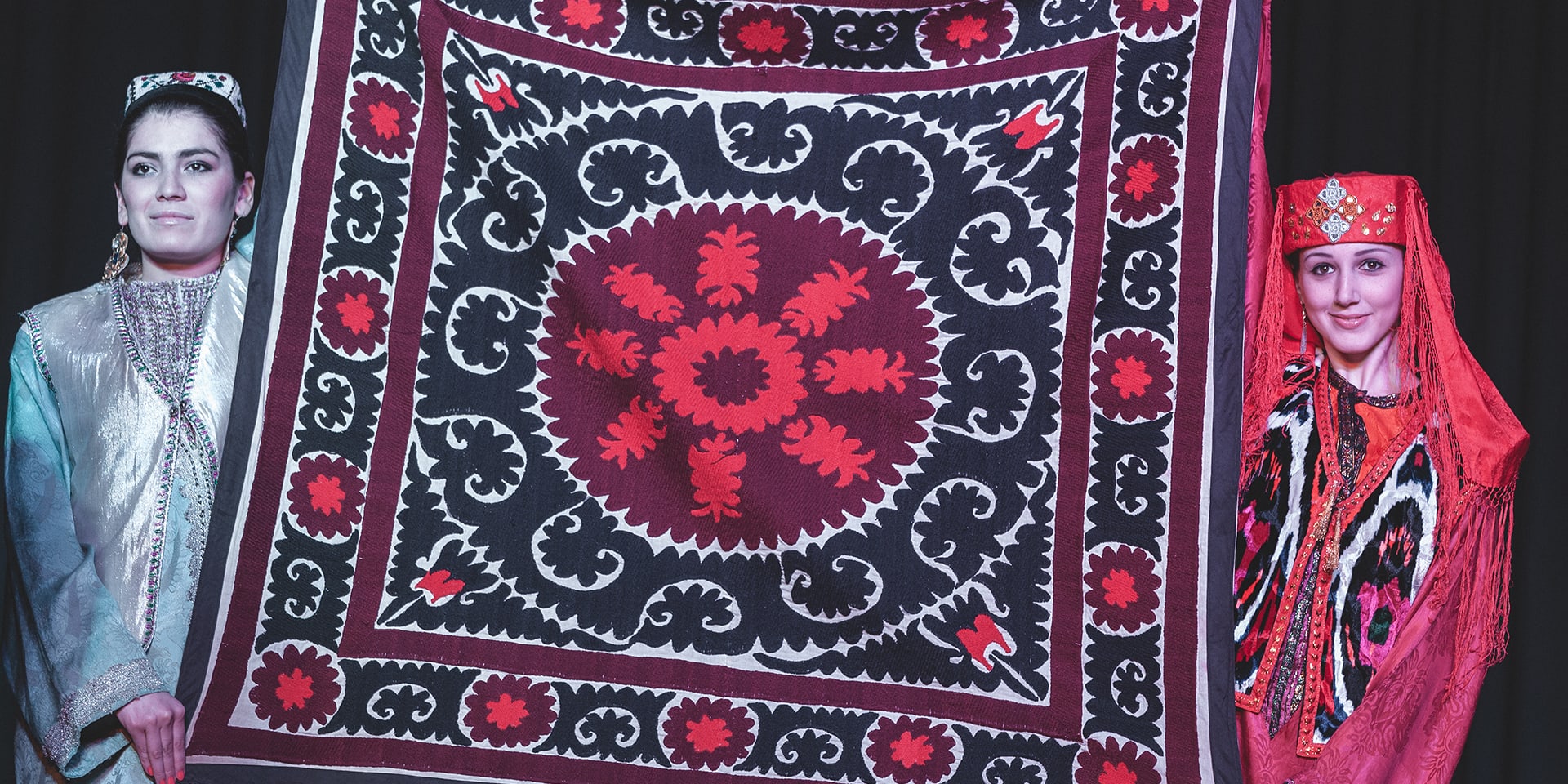 Nestled into the southeast corner of Uzbekistan, near the Tajikistan border, sits the country’s most famous city. Samarkand boasts an incredible 2,700 years of history that includes an important role in the ancient Silk Road and a pivotal position as the headquarters of the ruthless and powerful leader Tamerlane, who conquered West, South and Central Asia, making Samarkand the capital of his empire. Yes, here the history runs deep, with a richness of legends and tales, and a culture all their own. Part Russian, part Persian, part Asian, Samarkand is unlike any other part of Asia. And recently, I went to discover the land for myself. 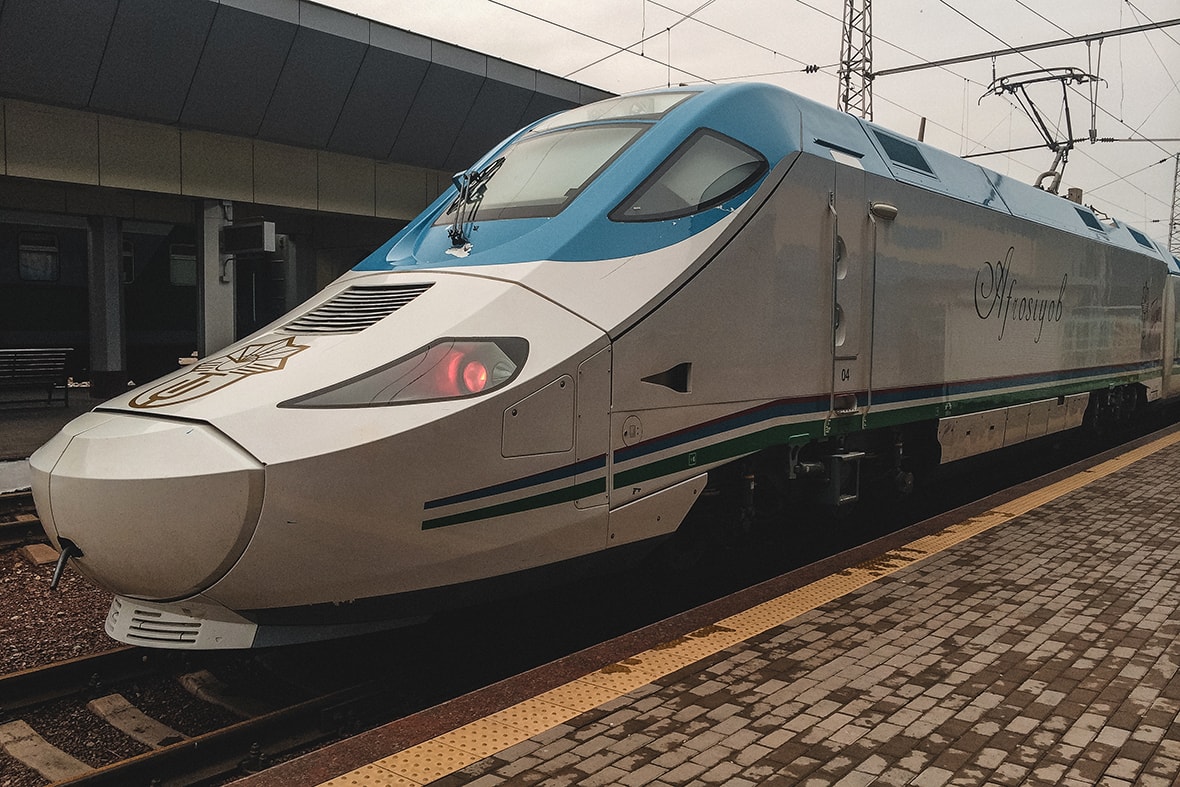 The high speed train from Tashkent to Samarkand.

I arrived at Tashkent’s humble airport. Unimpressed, I was shocked to step into what seemed to be a completely different world as I boarded the new high speed train to Samarkand the following morning. The shiny train from Spain hit speeds of nearly 140 miles per hour on the painless two-hour journey. Once arrived, I checked in to my hotel and stepped back out into the streets for a full day of touring the area. I was excited to discover the secrets of Samarkand. 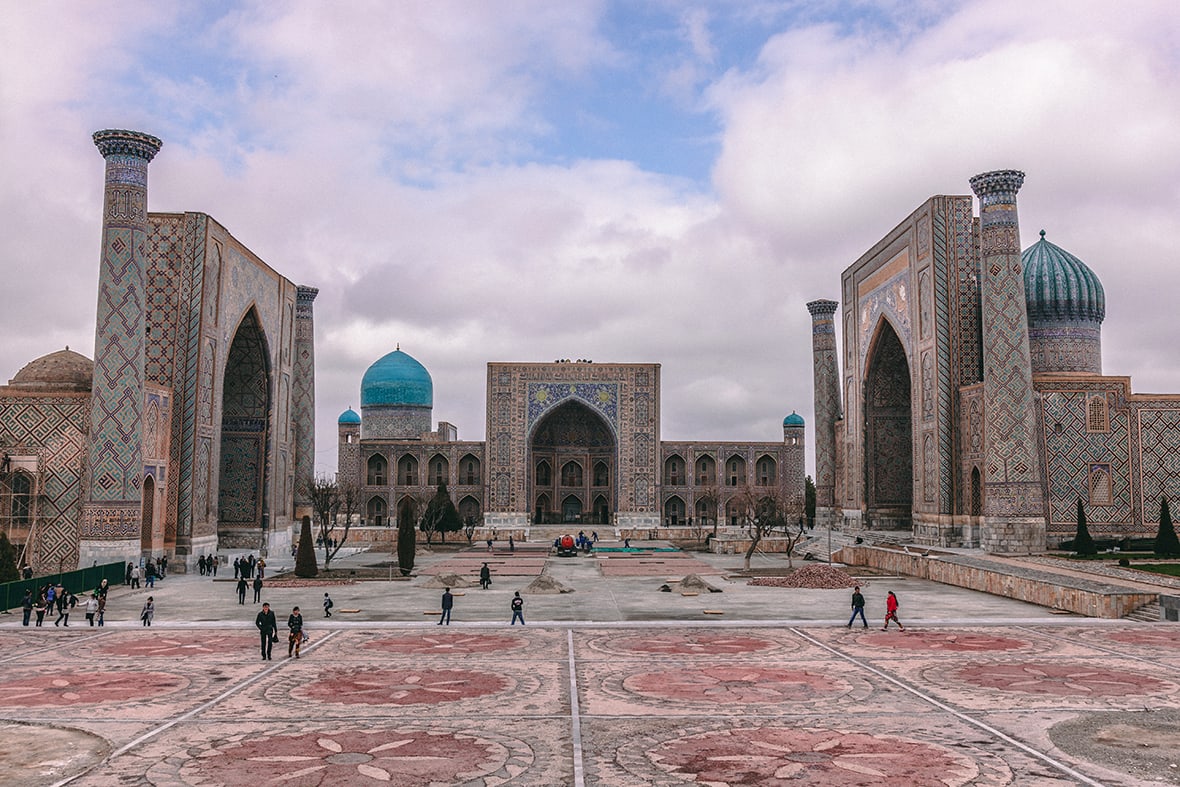 Not wasting any time, we headed straight for Samarkand’s main highlight, the Registan, which consists of three truly impressive, imposing madrassas that are among the world’s oldest: Ulugbek, Sher Dor, and Tillya-Kari. This iconic ensemble is one of those places that makes you go ‘Wow’. None of the buildings are functioning, and the insides are full of shops, but that didn’t make the structures any less stunning. The majestic square was medieval Samarkand’s commercial center, and one can almost hear the sounds of the bazaar that likely once took place in the plaza. 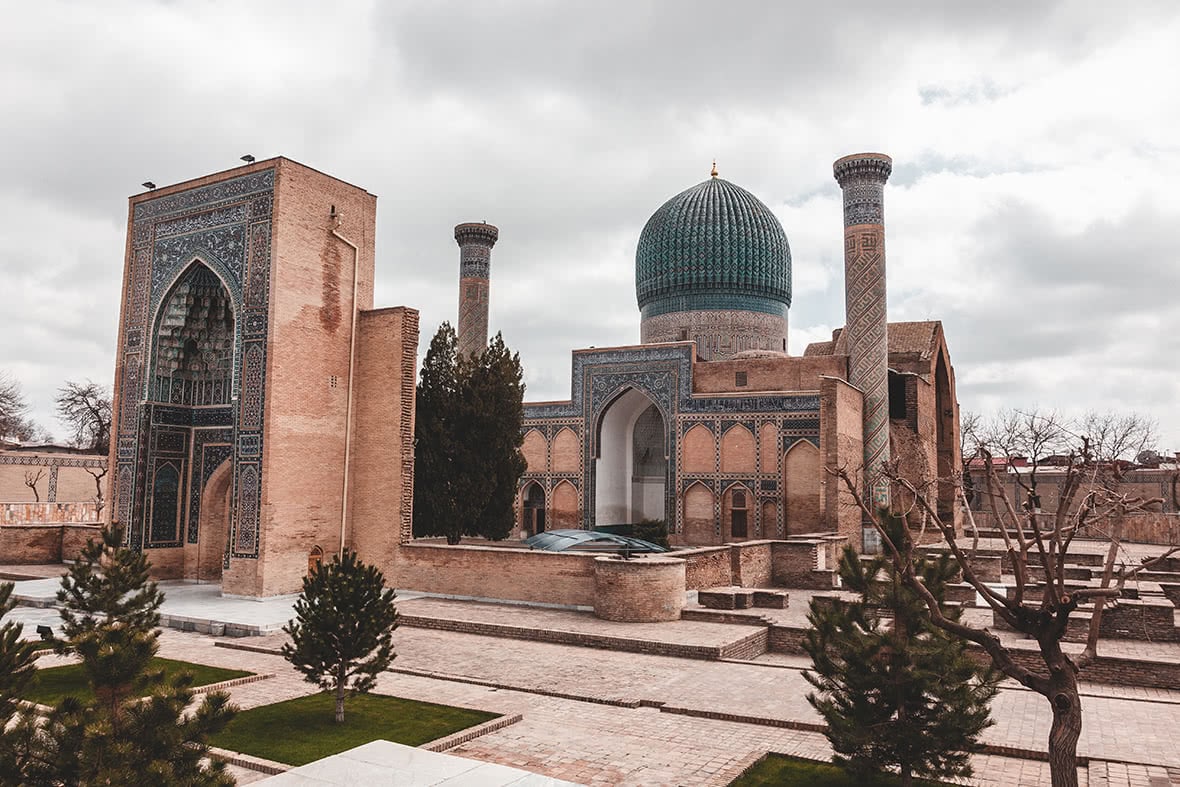 We continued onwards to Gur-Emir Mausoleum, the tomb of the legendary leader Tamerlane, who founded the Timurid Dynasty in the late 14th century, which saw his great-great-great-grandson as the ruler of the Mughal empire two centuries later. The self-proclaimed Sword of Islam, Tamerlane, also known as Timur, rose to become the most powerful leader in the Muslim world during his lifetime, and was responsible for the deaths of an estimated 17 million people (at the time, five percent of the world’s population); his decision to make Samarkand the capital of his empire transformed the city into what was the most magnificent in Central Asia in its heyday. Timur’s own tomb was built by his descendants, and also contains the tombs of his sons and grandsons, thus having become the family crypt of the Timurid Dynasty. Though nowadays, only the foundation of the madrassah and khanaka, the entrance portal, and a part of one of the four original minarets remains, the exterior has retained what must be some of its original splendor.

Our next stop was the old paper mill. Samarkand is famous for being the site of the first paper mill in the Islamic world, and amazingly, they still employ ancient paper making methods today, with a working wafer wheel perched on the banks of the Siab river, just outside of the city. 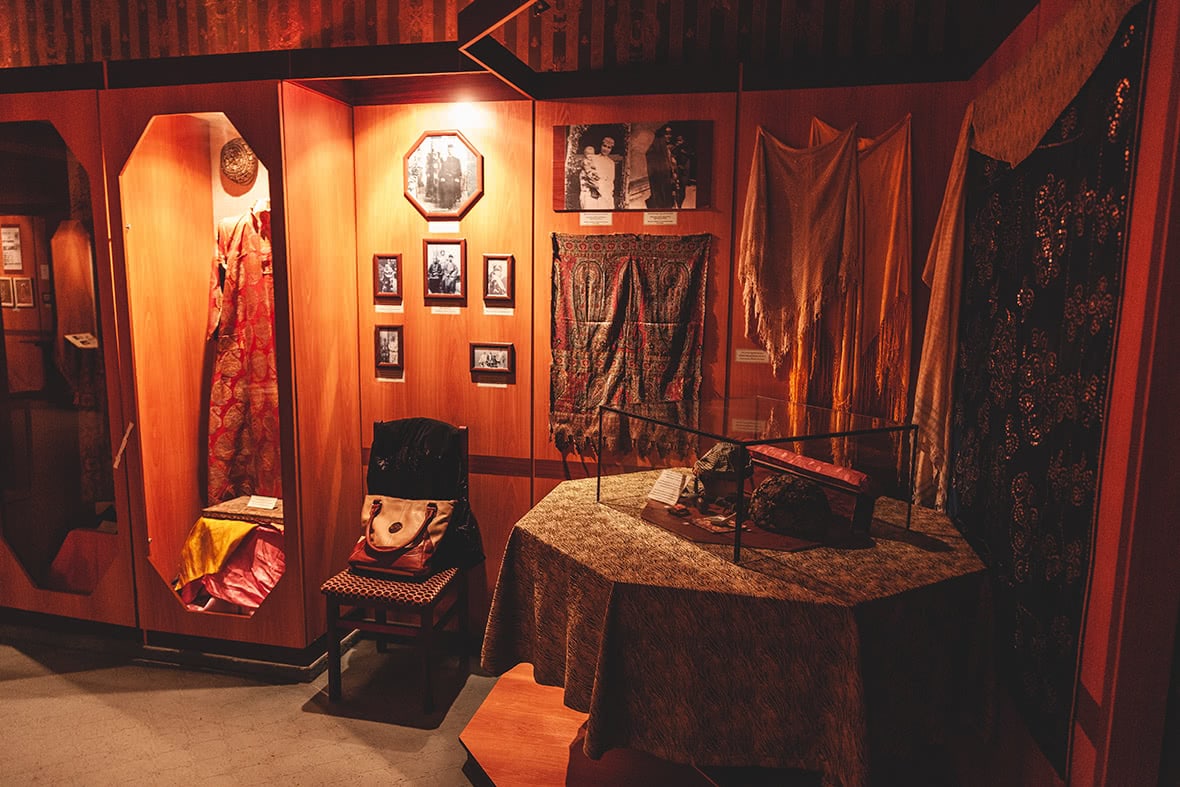 The former home of Abram Kalantarov, a Jewish merchant from Tsarist Russia

I was really enjoying exploring this ancient city, and continued my tour with a stop at a small museum and the former residence of a rich Jewish merchant from Tsarist Russia, named Abram Kalantarov. Here, I learned about the area’s deep Jewish history for the first time. The old mansion sits on a colorful street, and its museum contains interesting artefacts. 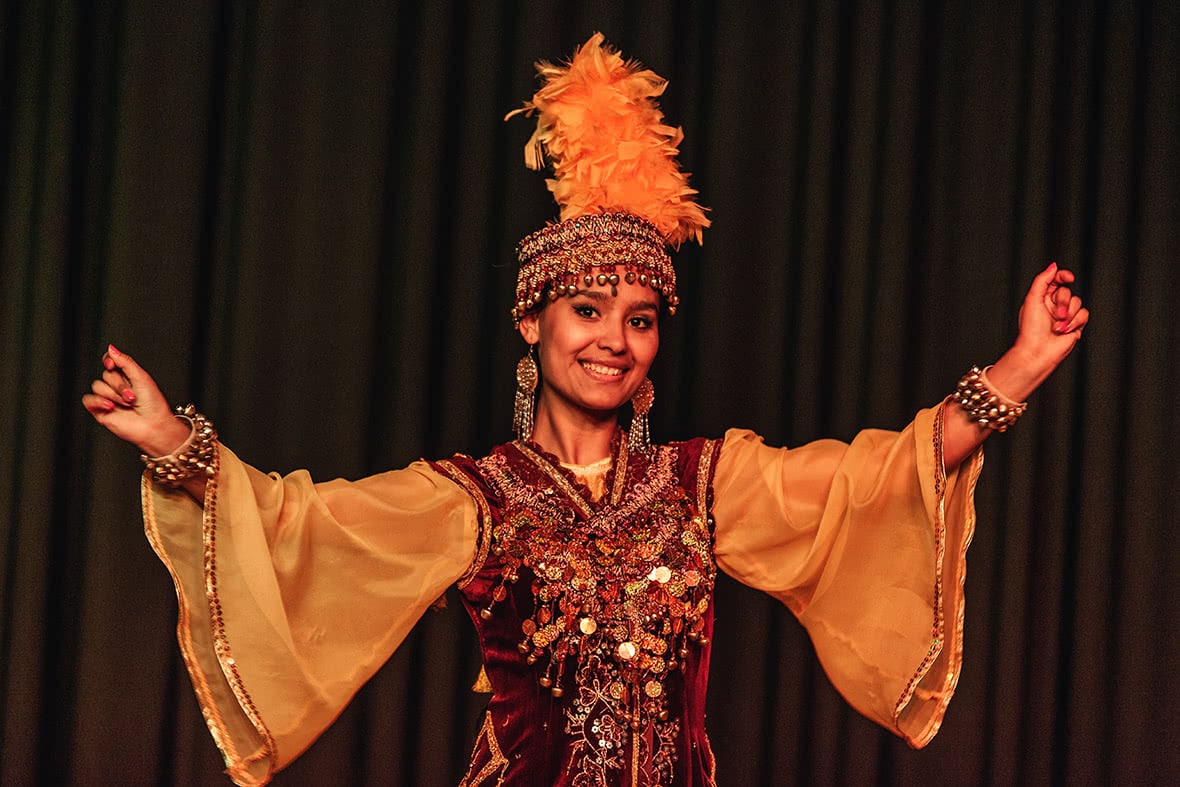 Dancers at the El Merosi Theater of Historical Costumes

I wound down the day by watching an excellent dance performance showcasing traditional Uzbek costumes at the El Merosi Theater of Historical Costumes. Uzbekistan has a rich culture of dance, and here I was able to observe customs and traditions throughout the country’s history to present, performed in front of me in a most engaging, creative way. 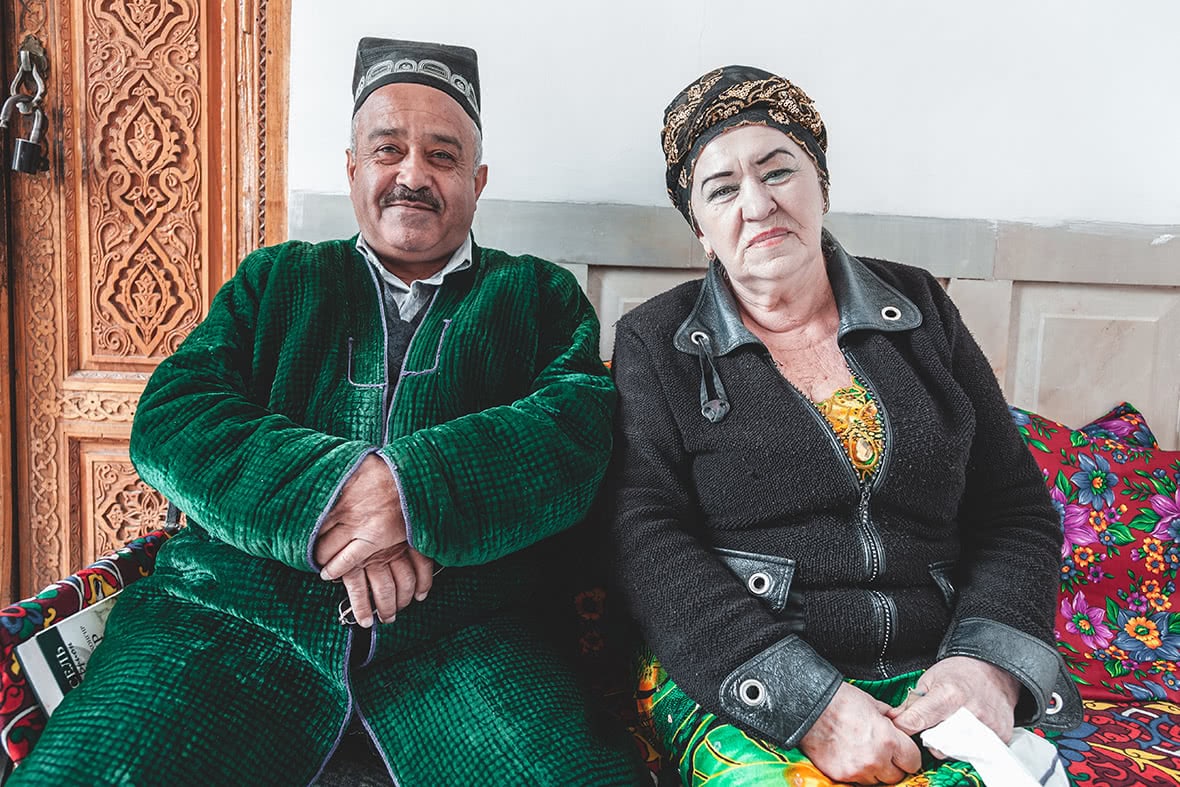 A very friendly Uzbek Imam and Russian woman at Shah-i-Zinda.

The next morning began with numerous hotel inspections, followed by a visit to Shah-i-Zinda. Formed over nine centuries, the complex now includes more than 20 buildings. Legend has it that this was the burial grounds for the cousin of the prophet Muhammad, who came to the city to preach Islam, and was beheaded for his faith. For me, it was a great place to stroll around and have “people experiences,” while capturing local life as it happened before me. The Uzbek people were extremely friendly, and happily posed for photos. There is a cemetery nearby that I found to be most notable for its large portraits of the deceased etched on each tombstone – it was the first time I’d seen that kind of commemoration anywhere in the world. 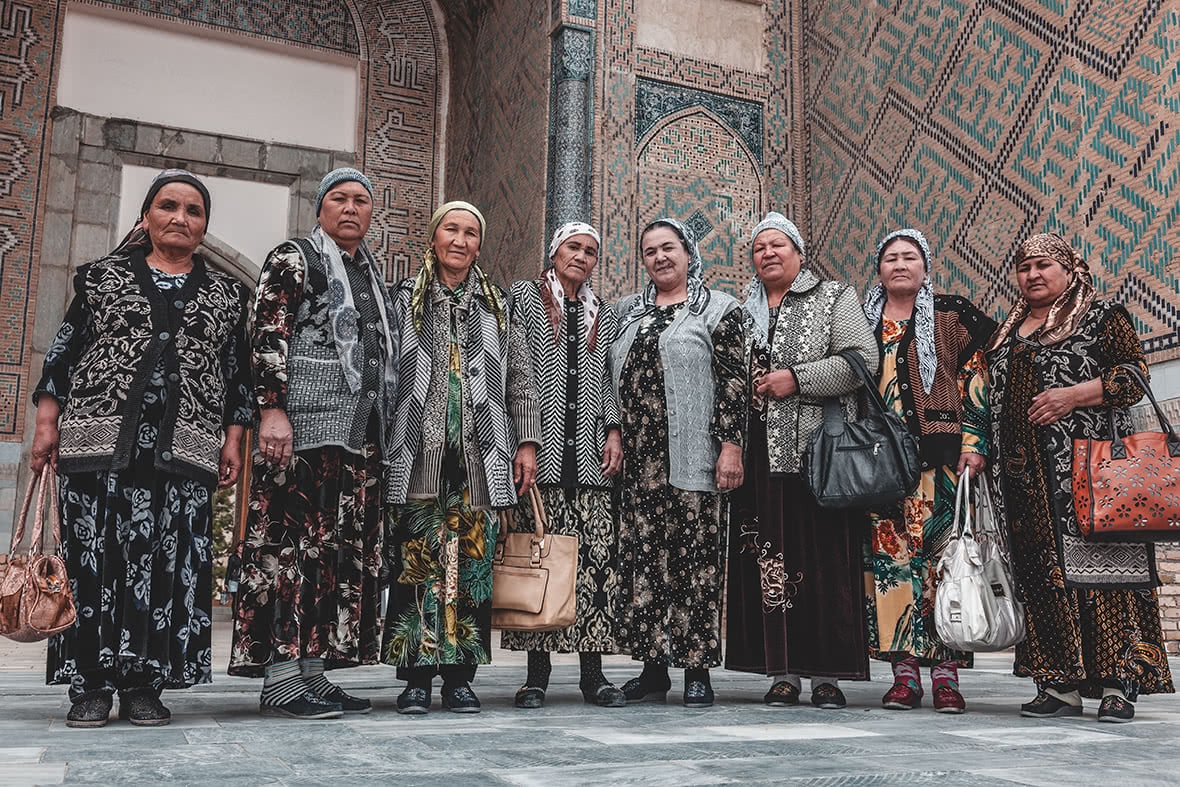 Friendly women from the Fergana Valley in front of Bibi-Khanym mosque.

Bibi-Khanym mosque was our next stop, with its wonderful blue dome and intricate facade. Once one of the largest mosques in the Islamic world, Bibi-Khanym was one of the crown jewels in Timur’s empire, having made use of highly-advanced construction techniques. Legend has it that Timur’s wife, Bibi-Khanym, ordered the mosque built as a surprise for Timur. The architect fell madly in love with her and demanded a kiss ahead of its completion. She complied, and when Timur found out, he had the architect executed and demanded that henceforth, women don veils to prevent men from being tempted by their beauty. I stopped and chatted with an extremely friendly group of women visiting from the Fergana Valley – they joked around and posed for photos, as did an old man of about 90, who had worked on the restoration of this very complex when he was young. 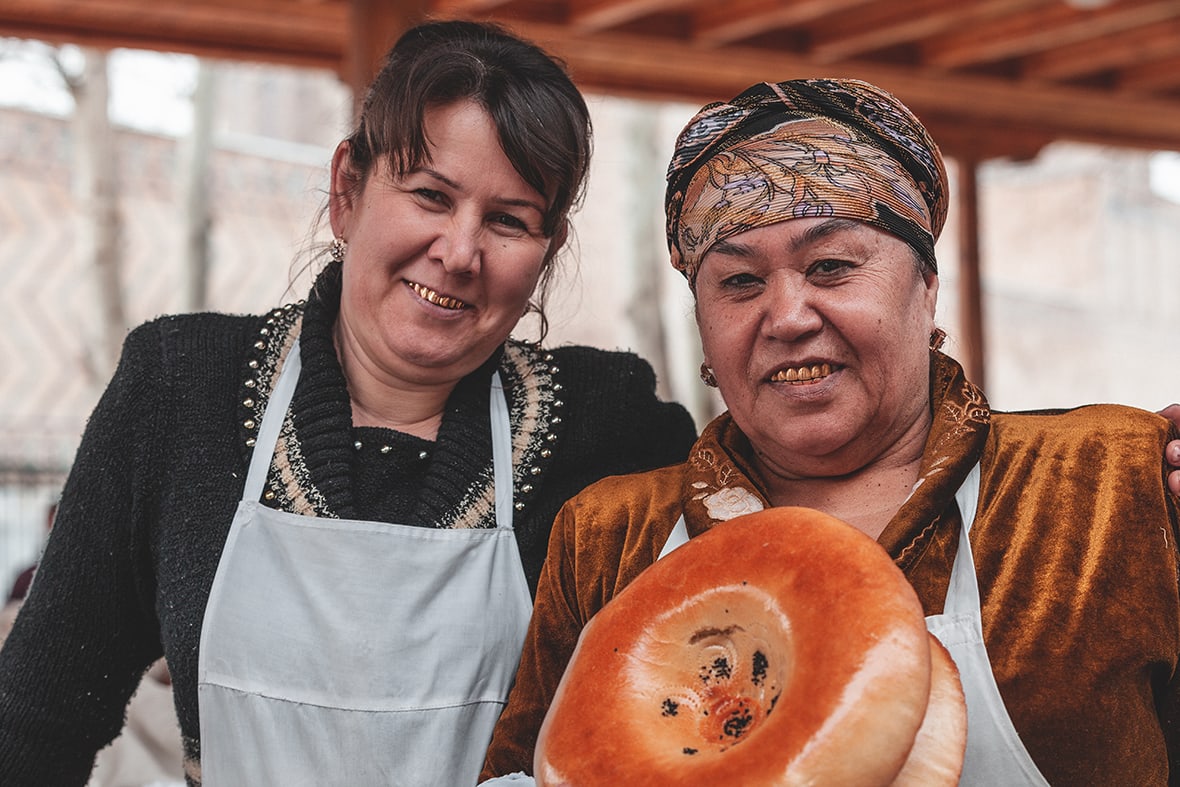 We stopped for lunch at the local market. It was full of color, and the bread vendors, with their huge bagel-without-a-hole-type creations, seemed to be icons of Uzbekistan’s intricate culture. Also for sale at the bustling market was all kinds of cheese, produce, dried fruit and nuts. With the friendly people and vibrant atmosphere, it was a wonderful market experience. 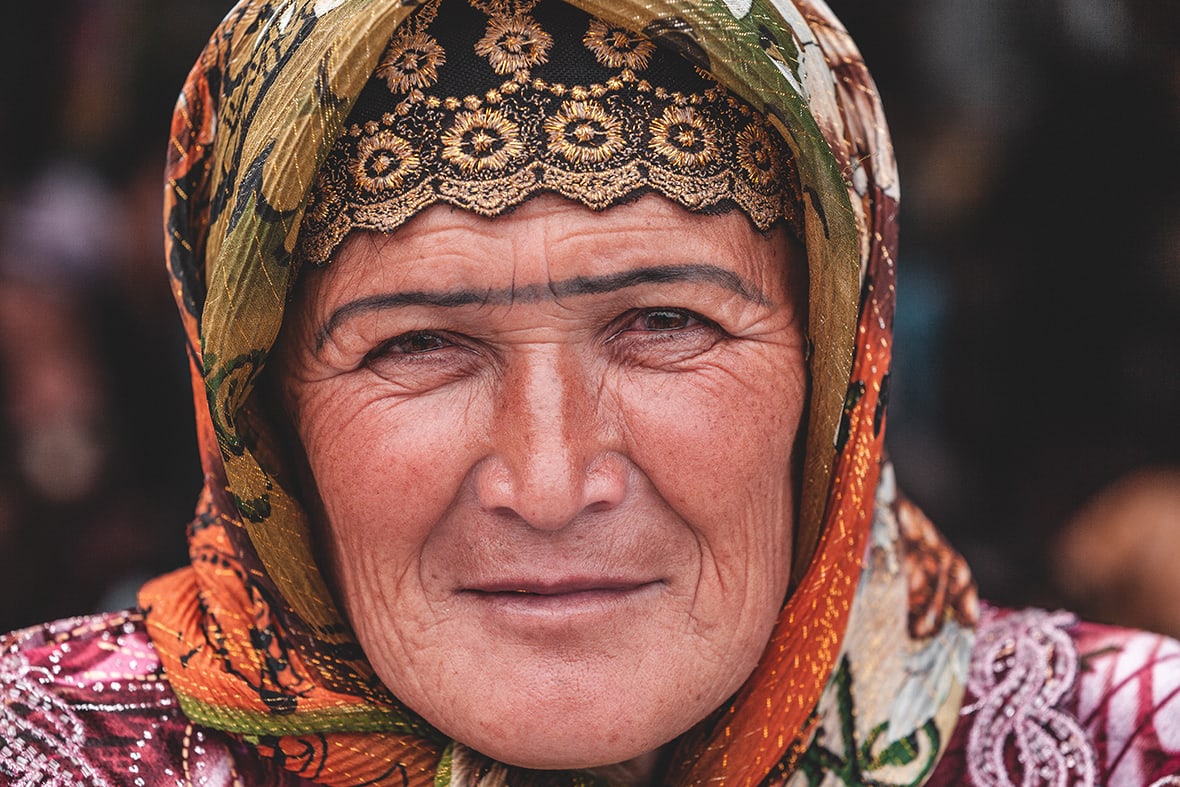 A very friendly (and photogenic) vendor at the Samarkand market.

After lunch, we visited the Ulugbek Observatory, which is more notable for what it was than what it remains today. Known as one of the great archaeological finds of the 20th century, the 15th-century three-story observatory was built for ruler and astronomer Ulugbek. Unfortunately, all that remains is the curved track of his astrolab, which he built to observe star positions. I found myself distracted by the backdrop of beautiful snow-capped mountains in the distance.

Our final destination was the Tomb of Daniel, the mausoleum built for the Old Testament prophet revered by Muslims, Christians, and Jews alike. Though this is not the only place that claims to be Daniel’s final resting place, Samarkand may hold the most interesting legend: Timur’s successive fails to conquer modern day Syria were blamed on the prophet’s corpse. When Timur finally succeeded, he ordered the body to be buried at Samarkand for good luck. Upon its burial, a natural spring started to sprout, with reputed healing powers.

I ended my trip with yet another delicious Uzbek meal. This meal was particularly special, as we sat for a private dinner at a beautiful local home, where a famous local musician played for us right at the table! Surrounded by Uzbek delights and as the sweet sounds of its ancient culture rang in my ears, I knew I would remember this night forever, and indeed, the entire trip, which was unlike anything I’d been expecting. 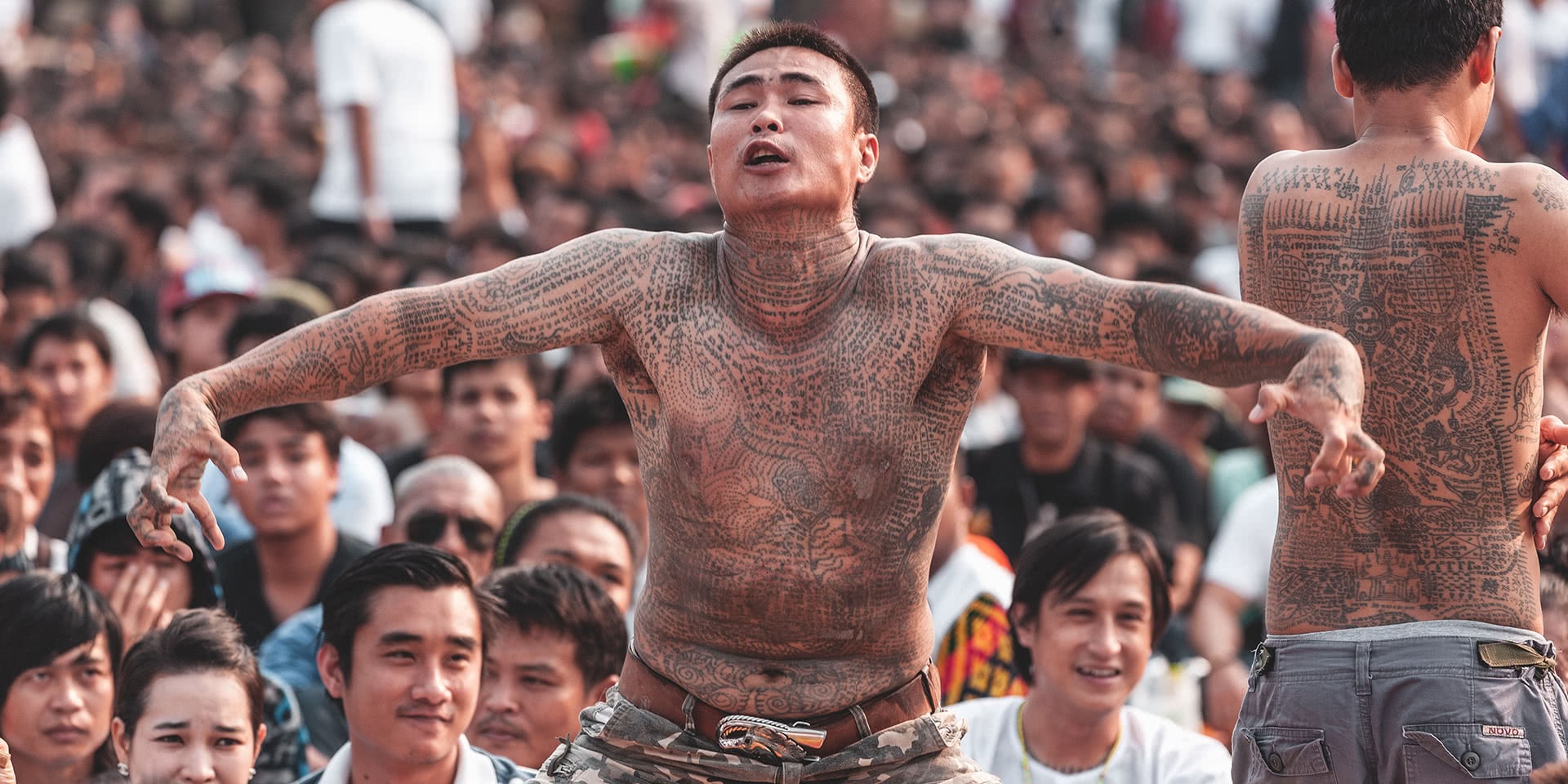 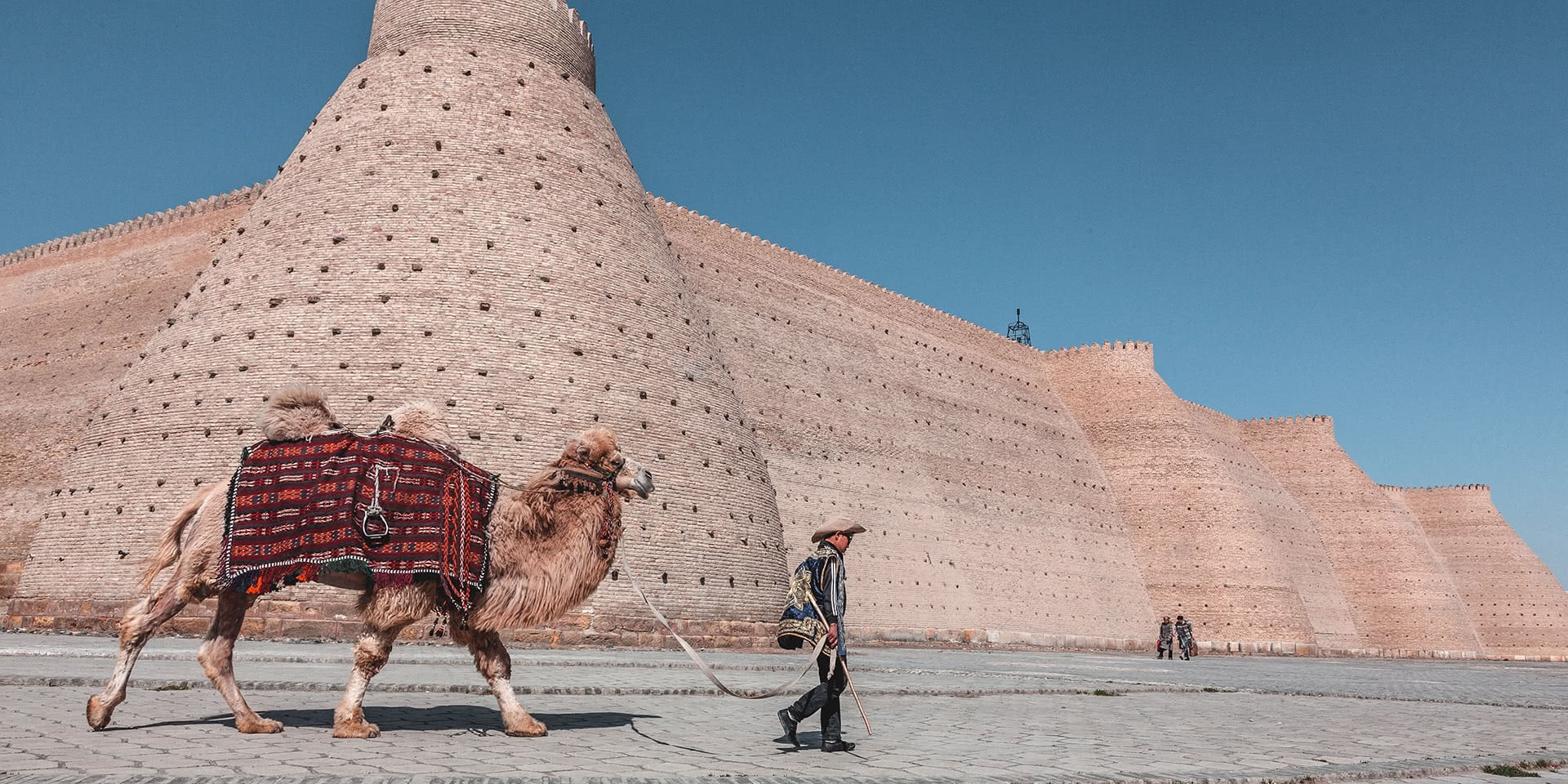