When one thinks of the Gobi desert in Mongolia, they might well picture an endless landscape of sand dunes in their mind. Yet less than five percent of the Gobi is comprised of actual dunes. In other words, it’s not the Sahara or the Kalahari. It is, however, a unique desert in its own right. It’s big—about 1,000 miles east to west and 500 miles north to south.

Mongolian children ride off into the Gobi for a horse race.

Mongolia has stood apart from Russia, the Soviet Union, Stalin, Mao and Mainland China to remain culturally significant and enduring. In the Nemegt Basin, fossil remains and ancient tools go back over 100,000 years. Over the millennia, the Gobi has captured the imagination of Westerners—think of Marco Polo trekking across in the company of Medieval caravans.

My own personal journey to the Gobi began when I flew into Ulaanbaatar via Beijing. It was the last week of April, which is considered to be the “pre-season” of travel and still relatively cold—especially at night. As a result, there were no tourists around yet and the terrain was brown and often resembled a lunar landscape. 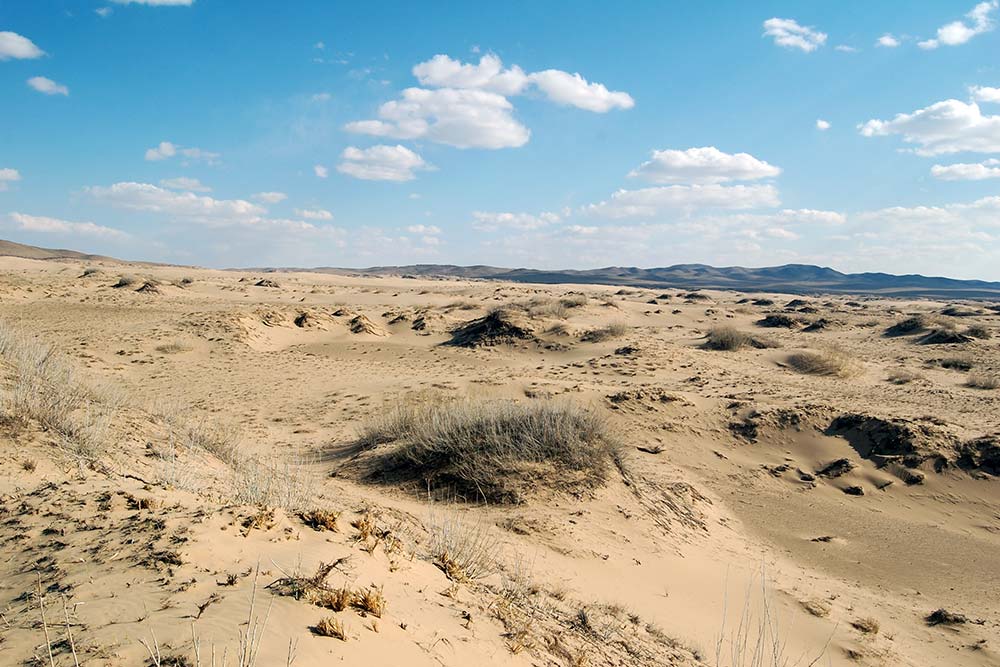 The north Gobi is a few hours from Ulaan Batur and are the closest sand dunes to the capital.

I headed off for Bayan Önjuul soum on the northern edge of the Gobi, which was approximately four hours’ drive from Ulaanbaatar. After leaving the city the road began to disappear. I witnessed my driver navigate across the Steppe with his own internal compass.  If that wasn’t unsettling enough, the fact that he and our guide were loudly singing Mongolian folk songs and barely paying attention to the “road” should have been. But when in Mongolia, do as the Mongolians do, so I decided to go with the flow. They are actual nomads after all, and they knew what they were doing. 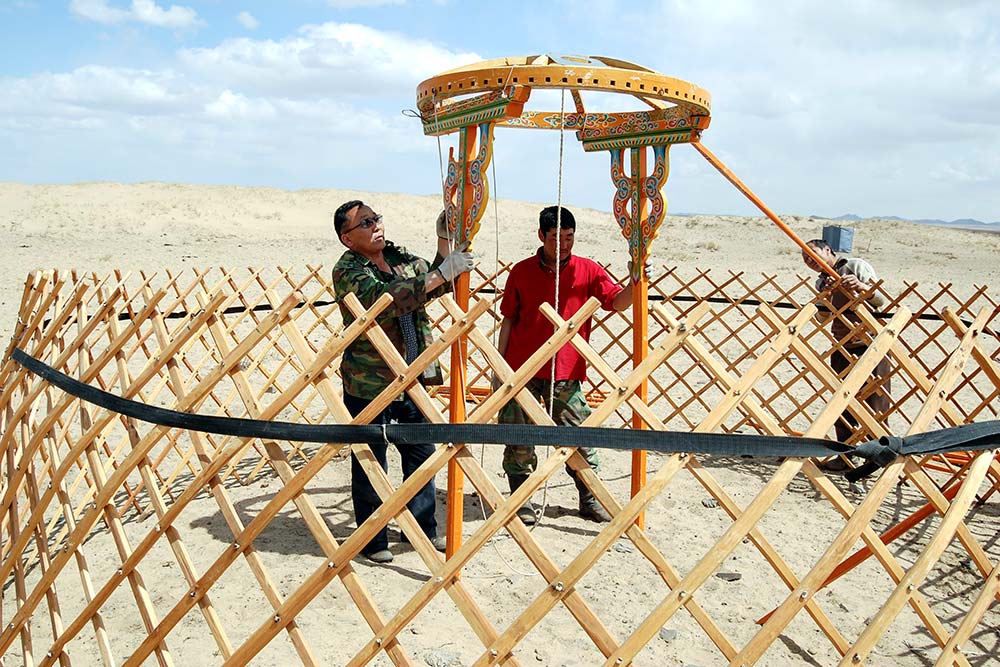 Since it was still early in the season, the gers in my camp were not set up as of yet. This gave me an opportunity to watch how they are assembled. Gers are really just tents, but they are really well thought out from an engineering standpoint. They are actually quite comfortable, with real beds and there was a fire in the middle that kept me warm throughout the cold night.  The camp workers kept it going through the morning. 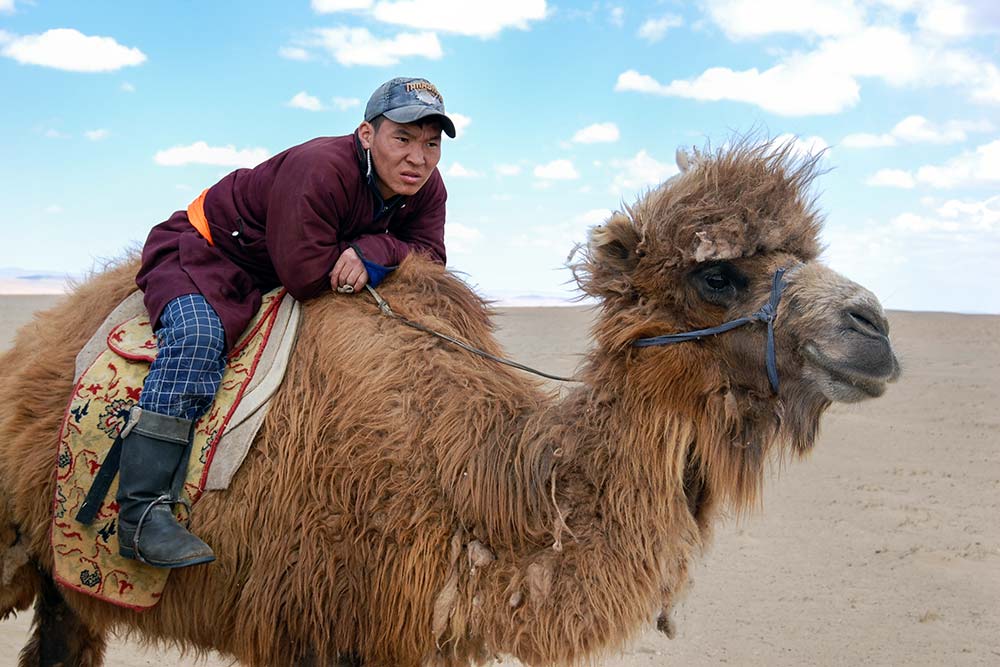 Camels are a common sight in the Gobi desert.

The Mongols were separated from China by the Great Wall. Here they learned to use camels. They tamed the steppes and raised livestock. Sheep, goats, horses and other beasts of burden are found in abundance. Not many tourists come to this area and that made my visit all the more special.  We set off to the 20km long sand dunes, and came across some locals traveling by camel. I climbed up to the top of a big dune for the view of the surrounding area. Again, it should be noted that the Gobi is not made up of sand in the largest sense. There are all sorts of terrain and this is a part of what makes the Gobi so special. There are grasslands, as well as rocky and mountainous parts. 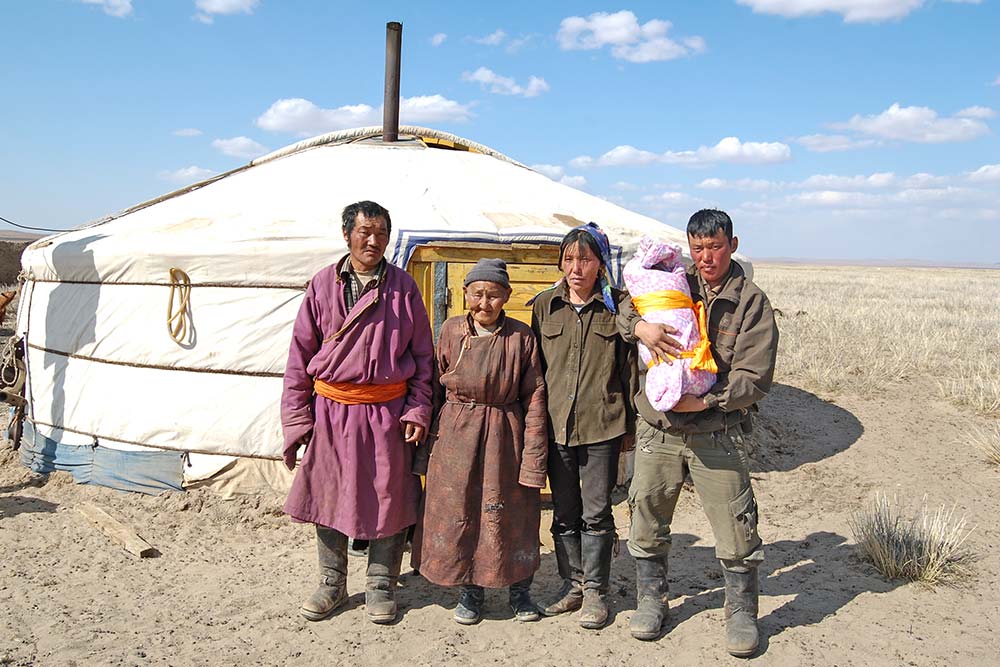 A family that I visited in their ger in the Gobi.

We visited a nomad family in their Ger. They were shearing their sheep right in the middle of their home. What we saw was the equivalent of shearing a dozen sheep right in the middle of your living room.  For these nomads, this was business as usual. Mongolian nomads have a tough life, as the conditions in the winter are extremely brutal. There was a 92 year old woman, her elder husband, and a younger couple with a baby living in this Ger and they were extremely friendly and welcoming.

Nomads are always moving their Gers from place to place, so you never know for sure where they will be one season to the next. If they don’t like a place or a situation, they simply move right on down the line.  That makes it difficult even for family members to find each other if they are away for an extended period of time.  Most nomads don’t have mobile phones yet, and the postal service is useless without an address. 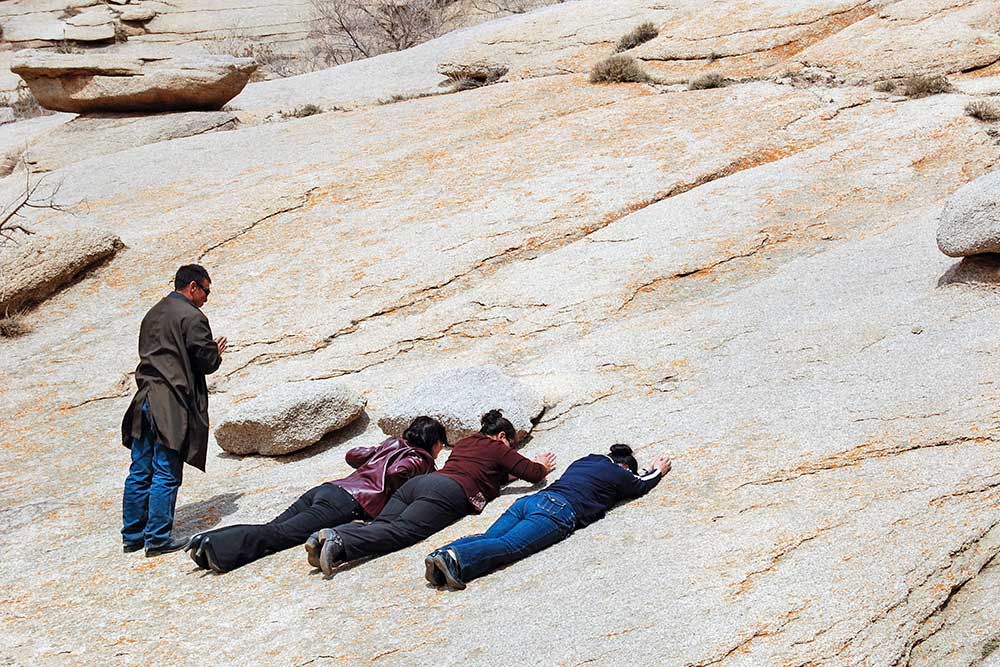 At Zorgol, many locals were on the ground, prostrating.

As the trip continued on, we were very fortunate to witness a small local Nadaam Festival in a village named “Zorgol.”  The area is more commonly known for Zorgol Hairhan Mountain, which is small sacred mountain with pictographs of Ibex and red deer. We visited a pilgrimage site where the locals were praying around a tree and many Mongolians were laying down on the ground prostrating.

Zorgol is an interesting place. Ovoo shamanistic prayers are offered on and through small stone altars. There are caves scattered about, as well as “holy springs.” But the ovoo are most interesting. They are cairns that are believed to contain offerings that are given to local spirits. While traveling through Zorgol, it is wise to walk around the cairn three times, clockwise, and then add a stone to the cairn when you are done.   It is sometimes possible to spot wild Argali sheep here, which are the largest mountain sheep in the world. 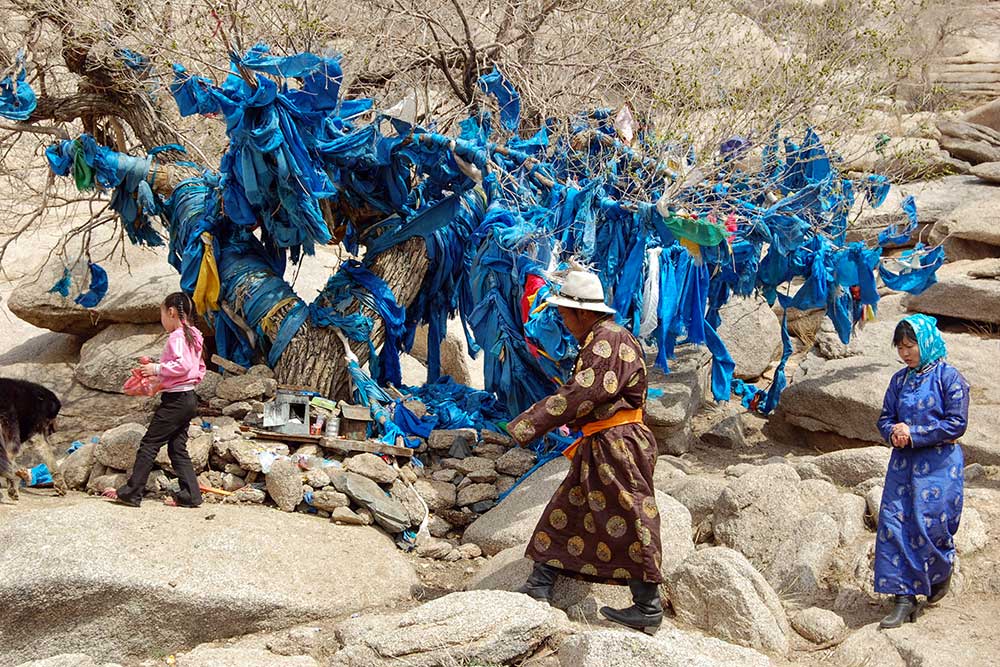 Worshipers in Zorgol walking clockwise around a sacred tree.

During Nadaam, which are festivals held all over Mongolia, the people dress up as ancient warriors and show off their skills in archery, wrestling and horsemanship, amongst other things. The main event of this Nadaam in Zorgol was the ten kilometer (six mile) horse race. The riders were all young children, between the ages of five and ten. They were strong—and a throwback to the DNA of the ancient warriors that stormed out of Mongolia, into Russia, the Middle East and knocked on the gates of Vienna, Austria. 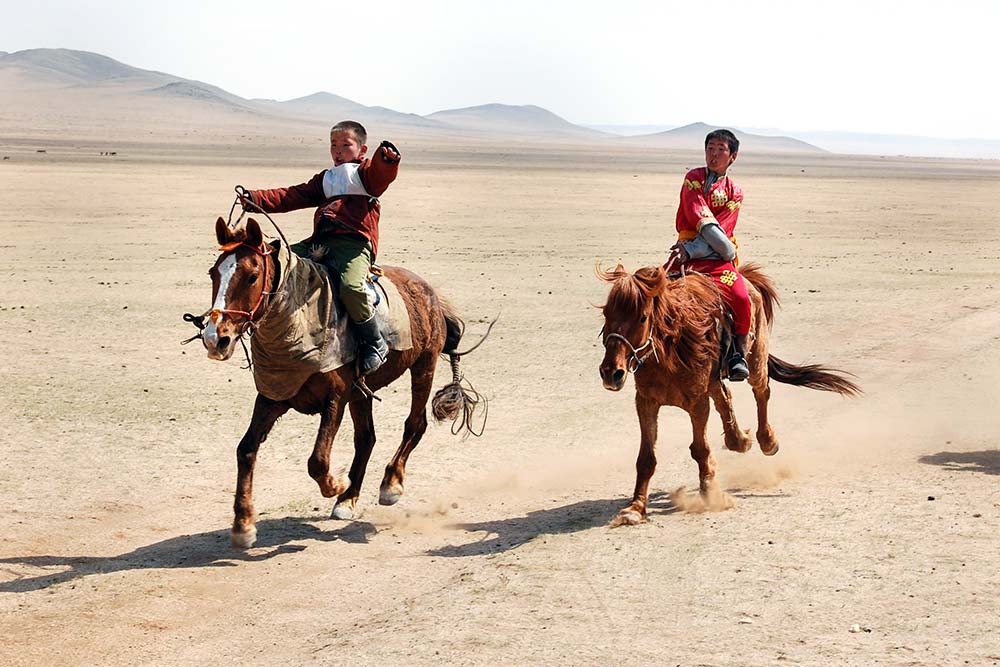 An exciting horse race during a Nadaam in Zorgol.

The horserace I saw was scarcely believable. There were a dozen or more children riding along at a very impressive pace. We followed them at breakneck speed in our Russian 4 Wheel Drive Jeep and it was really quite exciting! These were no circus pony rides—that’s for sure. The Mongolian kids rode like pros, which is a testament to their rugged lifestyle. I was the only foreigner at the event, and as always, I felt fortunate to witness something few Westerners might get a chance to see.